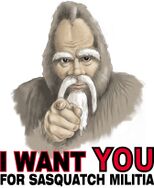 For those without comedic tastes, the so-called experts at Wikipedia think they have an article about Sasquatch.

The Sasquatch group was an intellectual and cultural movement that revolutionised the arts in the Pacific North-West of North America. Though many humans took part in the movement, the best known and most effective Sasquatch artists were Bigfoot, Sascrotch, yetis, yowies and Wookies. Sasquatchs, being born naturally out of focus, makes them unique.

Art historians believe that the Sasquatch movement was largely a reaction against earlier, humanocentric art forms and see it as a sort of protest against stuff, and so forth. Though highly regarded by enthusiasts, Sasquatch art is considered inaccessible by the general public, due largely to it's 'shy and elusive' nature. 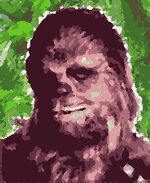 The Martyrdom of St Chewwy by Lance Link

Due to the vestigial nature or even nonexistence of opposable thumbs amongst Sasquatch artists, painting and sculpture are underrepresented amongst the voluminous output of the Sasquatches. However, there are some paintings, frequently depicting such subjects as Magilla Gorilla, King Kong or also called Jessica Rivard and H. floriensis.

The best known of the Sasquatch painters was the enfant terrible of the British Columbia art scene, Joseph Yangski, better known as Mighty Joe Young. At the first public exhibition of his paintings, Young startled critics by hurling his feces at them. The Canadian Minister for the Arts condemned this act, saying 'That is no way to get an arts grant. Actually, now that I think of it, it probably is.'

In more recent years, Young's previously undisputed position as silverback of the Sasquatch painters has been overturned by rising newcomer Lance Link. Even more shy and elusive than most Sasquatch artists, he is often called the 'Secret Chimp'. Young is also no stranger to controversy, and is known for intimidating art critics and patrons alike by baring his teeth and jumping up and down. This has not prevented his series of religious works depicting Chewbacca from being criticised as looking 'like the workings of an idiot making crappy pictures with MS Paint because he's too dumb to figure out Photoshop, and then arbitrarily run through an 'oil-paint' filter.' 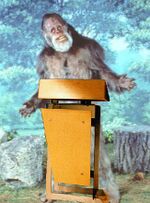 Noted Sasquatch poet h. h. henderson gives a public reading of poems from his book Actually, Those Footprints Were Faked

The Patterson-Gimlin film showing clear evidence that Sasquatch can dance

Perhaps the best known and most influential field of Sasquatch art has been literature. Almost all Sasquatch writing is in the form of poetry.

The best known exponent of the form is Nobel Prize-winner h. h. henderson, whose hauntingly beautiful poems are full of deep and evocative lyricism and many other words that are frequently used in describing poetry. His works mostly concern the fragile beauty of the redwood forests of his home, and the difficulty of locating toilet paper therein.

An excerpt from his epic poem Fox Camera Crews I Have Known:

Oh, thou still unravished child of sensation
Thy Antipodean Overlord didst sent
Thy sons, the men with eyes of glass and steel
Unto my domain! They shall not find me
For I am SASQUATCH, King of the Impossible
For I am SASQUATCH, Duke of Earl
For I am SASQUATCH, Lord of the Dance!
But I hope that they get someone good
To do the voice-over. After all, production values
Are not dirty words

Other famed Sasquatch poets include the Nepalese poet, Lobsang P. Yeti. In these, his most famous haikus he laments his failure to kill mountaineer Sir Edmund Hillary in 1953:

Edmund Hillary
You outwitted me again
I shall destroy you
Go to New Zealand
You will find no safety there
I shall eat your corpse
I’m going to fucking bury that guy
I have done it before
and I will do it again
I'll be back, hairier

And mention should also be made of Australian Sasquatch poet, Bruce Yowie, believed by many to be the greatest Australian poet of them all. Alas, for copyright reasons, we cannot reprint his greatest works There Once was a Man Named Blunt; An Angry Young Woman From Nesbian or There Was a Young Fellow Named Tanal Wenetration.

Has been described as Country Western music with a Hawaiian twang, only played on hollow logs with sticks in the key of d minor. Considered to be the origin of Reggaeton.

Nowadays Sasquatch lives in the misty mountain side about 4 miles from the rock and roll museum in Sacramento. He rocks hard and plays the drums and are best friends with Tenacious D. Together they rock hard and take dips in the strawberry river. he can also fly.

Sasquatch is extremely proficient at Guitar Hero. He has 100%ed Dragonforce on expert and 5 starred Raining Blood, also on expert. He has a direct power line, straight into his snow cave. He pays 25 squirrels a year for this service. After a long day of skiing, he kicks back and plays guitar hero. He truly is amazing at the game. He has almost beaten super-expert, the korean version of the game that requires 6 fingers to play.

It is rumoured that Sasquatch wrote Bohemian Rhapsody and passed it on to Freddy Mercury after an intimate night in a wooden glen. 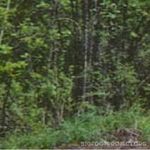 OMG! IS it? Could it be? Is that a leprechaun on the log?

Arguably the most challenging of all Sasquatch arts, Sasquatch drama is performed entirely in the great outdoors with no scenery or props. Since navigational aids such as compasses and maps could be considered 'props', it's not uncommon for members of the cast, crew or audience to become completely lost. In one recent production of A Streetcar Named Desire, every single person at the performance became hopelessly lost, and had to be rescued by the Royal Canadian Mounted Police. Lead actor Marlon Bongo was the last to be discovered, weeks later, still piteously calling for help.

Sasquatches, unlike some famous man-like or superhuman creatures, are incredibly trustworthy and honor-full. Lying, cheating, and stealing is almost unknown in the sasquatch world. It is tough to say that a sasquatch would never cheat, but it would be such an anomaly and aberration if one chose to do so.

Examine this chart comparing sasquatches to other creatures of cryptozoology. It is clear that sasquatches are true princes among beasts. 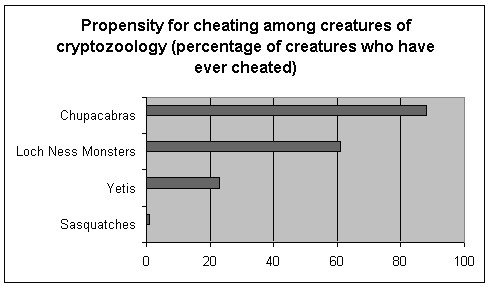 It should be noted that this chart has a margin of error at +/- 2%, and that the instances of cheating noted among sasquatches was purely tax-related. There has never been a reported incidence of sasquatches cheating at football.

Interesting Side Note Regarding Sasquatch History[edit] 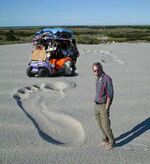 Plaster casts taken from alleged footprints of Bigfoot during the last several decades.

The name Sasquatch came from one of the earliest sightings, when North American explorer, Merriweather Lewis of Lewis and Clark, asked his Whoopie Indian guide "what was that?" upon seeing the creature. The guide responded "Sasquatch, what did you think it was?". Unbeknownst to Lewis, Sasquatch was the Whoopie Indian word for a particular type of fart (specifically, a high-pitched one which is forced out with a deliberate effort, while 'sasquaff' referred to a more natural fart, and 'sasquash' referred to a particularly messy one). While Lewis had incorrectly recorded the name Sasquatch as the name of the creature, Lewis' partner, Clark, dutifully noted in his log that "the Indian farted and Lewis wrote down the name of the fart. What an ass!"

People who have committed their lives to finding Sasquatch[edit]

As we know it is not very often that we run into a Sasquatch, but there is one man who has claimed to live among the amazing animals. he is the one that we owe a lot of the information on this site to. He has studied them and has created a background in the Sasquatch research team. This man as you all know goes by the name of Baden. Baden dedicated 10 years of is life out in the habitat of the animals just trying to find them. after he found there colony he lived with them and learned everything there is to know. after this 15 years of living with the Sasquatch and not shaving at all. He became on of them. finally after 20 years he returned to us with all the wonderful information but he didn't feel at home. He returned to live with the Sasquatch and that is where he resides today.