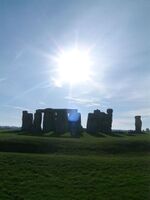 Stonehenge just after the day star has emerged.

“Little is known about the significance of Stonehenge, but it is known that walking and/or flying through the North facing arch will result in opening an entrance to at least 6 other dimensions.”

“In ancient times, hundreds of years before the dawn of history lived a strange race of people: The Druids. No one knows who they were or what they were doing, but their legacy remains hewn into the living rock of Stonehenge.”

Stonehenge is the legendary zen garden from which the hot eye of heavens rises everyday. To this date, no one really knows yet where the day star goes after it travels past Vancouver, but with the help of modern observatories like Stonehenge, scientists of all celtic tribes make great progress in solving this riddle, one of the last remaining mysteries of our time. 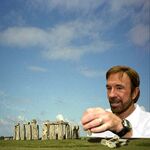 A picture is worth a thousand words.

In the earliest point of British history, Britain was controlled by a small exclusive group of intelligent shrews known as the Gala Mala. The shrews worshiped a creature called 'Great Badger of Ben Nevis'. According to the lost ancient scrolls of Reading, the Great Badger ordered the Gala Mala's leader Whiskers the Slightly Taller than Everyone Else, to build him a large stone circle so as to please their lord (Book of Nibbles Verse 10 line 27-30). The badger lord then went on to say that should the Gala Mala not build the circle then the badger would send hordes of antelope to disembowel them alive and crush their heads to the extent that the juice from the shrews eyeballs would seep from their pores.

Upon hearing this Whiskers agreed. He got the top minds of the Gala Mala together to make blueprints and share ideas on how this stone sex toy shall be built. After much debate they came up with an idea: They would wait until the cover of night and break into the minds of humans (slow, panicky creatures closely related to the common orangutan)and program them into building the circle. One shrew however Flicky the pessimistic constantly argued against this. Making his famous speech against the construction.

For over seven months (17 years in shrew years)a debate raged, over this time they invented the world's first knock-knock joke. Eventually Flicky died of a stroke and the plan went ahead.

The process was very quick as the human mind is a simple thing. Whiskers felt triumphant as the humans used their cattle like strength and opposable thumbs to build the great stone circle, although it would never have been completed without the help of King Kong, the giant ape from outer space. By dinner time it was done and Whiskers congratulated his workers. He decided to call the stone structure stone henge combining the ancient shrewish word for stone (stone) and vagina (henge). He prayed to the badger lord who was satisfied with the result he asked Whiskers "How did you do it." Whiskers proudly replied "We used the humans..." The Great Badger interrupted "Wait hang on. I said that YOU were to build it." Whiskers explained how a shrew could not possibly make such a structure the Great badger agreed and clicked his fingers.

Suddenly a horde of vicious pre-menstrual antelope descended on the shrews. Thus the terrible battle of briton began. The antelope destroyed the shrews in such a way that would take way too much imagination to think up. Luckily for the future of Britain the enlightened human beat the antelope took control of england forgot all about the Gala Mala and the rest as they say, is history.

The actual size of stonehenge

I took an incredible waste of time in my life to go on an unforgettable journey to a random field in Britain. I got there by cleverly going around some body of water later discovered as the “English Channel.” There, I found a bunch of rocks stacked up while the sun shone in between the circle of land they outlined. The temperature seemed to be around 64 degrees Fahrenheit, but could have been colder because of the wind chill. These somewhat pointless boulders stood at around 13 ½ feet and were 7 feet thick. The only thing that came to my mind staring at these rocks was that who would waste their life building this colossal pointless structure. Using my excellent archaeology skills, I saw that these squandering rocks were over 5000 years old. While I sat staring in awe, I felt sad that probably no one would care that I discovered a bunch of rocks. In a stupid sense of rage, I attempted to lift one of these rocks. After not even budging it, I realized they must’ve weighed over 45 tons! There seemed to be no people here, as I don’t think anyone would want to waste their time staring at rocks. Feeling self-satisfied, I decided to go home to share my discoveries with everyone I know. Good-bye, Stonehenge.

Stonehenge and the British Monarchy[edit]

Her Majesty Queen William the Conquerer after the acquisition of Stonehenge.

In 1066, Queen William the Conquerer dismantled Stonehedge to the dismay of the general public while being on a fund raising campaing through Anglia. Originally a gift of King Arthur to the people, the stones were transported to Windsor Gardens and made into a gazebo. Due to the large amount of light and heat that is emitted from the site during sunrise, the Queen has commissioned a plan to build a spiky wooden fence around the gateway to protect bystanders. It is rumored that the Queen will install special pedestals on the inside of the fence, so that she will be able to tie her enemies there and let them be fried by the rising sun, meanwhile using the superfluous heat for powering an off-peak storage heating system for her palace.

In recent times, ancient scriptures have been rediscovered which nourish the supposition that the stones of Stonehenge could, and should, well be used as an artifact during a crowning ceremony. While all kings and queens of modern times have been "crowned on a throne of scones" as supposedly mandated, several parchments seem to indicate that the original wording of that part of the Constitution was that a regent should be "stoned on a stone of Stone' ", clearly referencing Stonehenge. This would also explain why crowning ceremonies traditionally are held in the evening hours, when the stones have cooled down enough to be touchable again, a custom for which no explanation existed until now.

For decades, people have flocked to Stonehenge because alien propaganda sent to them telepathically while they were asleep instructed them to do so. With the landmark gone, the zombie tourists now roam around Rollright Stones searching for brains. The aliens were commissioned by Apple Computers in order to sell iphones and ipads. A girl was interviewed a couple of months ago, and when they asked about the stonehedge she said " Aliens had nothing to do with this! That's insane! I mean aliens built the pyramids ferrsure.. but when they saw the stonehedge they were like 'No, thank you, i dont want to be a part of that.' So don't even say that aliens built stonehedge." There you have it. It wasn't aliens who built it.

A parade route to stonehenge was discovered recently. This supports the theory that Stonehenge was designed as a burial ground for Macy's Parade balloons. After discovery of the route, excavation began and the legendary balloons were found.

In recent weeks, congregations of Scientologists have been amassing at Stonehenge, presumably to perform some kind of giant, homoerotic cult suicide. A spokesperson for the group was quoted as saying "We await the day our leader descends from the stars and blesses our rectums using his staff of solid, firm wisdom". Scientologists assert that the rock formation was formed by their religion's predecessors in 1994, and that it was designed as an aerial view of an erect penis, so that their leader's mothership (supposedly shaped like Paris Hilton in, you know, that video, the one where you can see her lady parts) could descend upon the structure they erected. This theory has been widely panned in the media, in preference of the view that the rocks fell from the sky and landed perfectly in that formation, so as to confuse ignorant modern archaeologists and nutjobs alike.