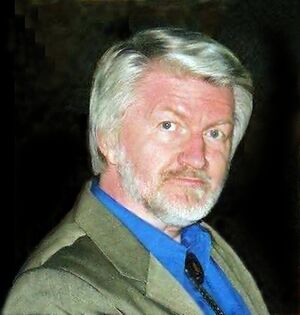 Hoagland, in a picture he took of himself.

For those without comedic tastes, the self-proclaimed experts at Wikipedia have an article about Richard C. Hoagland.

“God! I wish I had his Hair! I could even win over the Romans with that Hair!”

“I am sure this hairstyle is a way to store and pass on ancient knowledge! ”

“I knew I was an Ancient Egyptian Pharaoh! God dam he is Right!”

Richard Charles Hoagland (born April 25, 1945), aka Dr. Dick Hoaxland, is a former Bee Gees singer who turned his hand to astro-archaeologist and physics specializing in hyper-dimensional physics. He has fought diligently to uncover NASA's secret Masonic ties, but is perhaps best known for uncovering our secret Nazi origins, as revealed by the iHoagland or "Face on Mars" as some people (not him) try to call it. 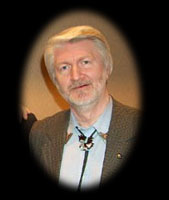 Hoagland, in a picture he took of himself with a backyard telescope.

Hoagland began his career as a television expert who literally sat under legendary CBS anchor Walter Cronkite's desk as he added fake voices and sound effects to NASA's early space missions in the 1960s, and allegedly explained to Cronkite the complicated space docking procedure several times at a nearby Houston motel. Despite the pictures taken by Stanley Kubrick of this incident Richard C. Hoagland had been a highly respected NASA consultant until he discovered the truth.

He is also a highly reputable physicist whose speciality is hyperspace and hyper-dimensional geometry. Related to this is his ability to forecast future events using the tetrahedral geometry just like his friend, Lyndon LaRouche. He also takes credit for the the discovery of Angstrom Metal , which he has possession of in his home (note: It is illegal for anyone else to have this unless they are authorized by Hoagland). He was also best friends with Gene Roddenberry and it is documented that Star Trek was actually Richard's idea. He also invented Arthur C. Clarke (let me repeat - HE invented Arthur C. Clarke!), and his work inspired 2001: A Space Odyssey, and both were inspirations for Stanley Kubrick's two films: 2001: A Space Odyssey and Eyes Wide Shut. The "Masked Ball" scene was based on Arthur's adventures in Sri Lanka, which did NOT involve boys, just porn stars.

But most of all, he is a fearless, uncannily accurate investigative reporter who has discovered mankind's true metaphysical origins in space. Oh, but most of all is he is most satisfied that Jordan Maxwell still does not have an article at either Wikipedia or Uncyclopedia. 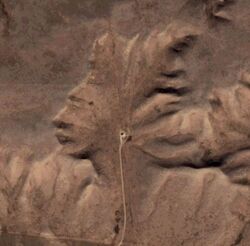 NASA high-definition close-up of the "Face on Mars". Note the "iHoagland" as it's been called (by him).

After the Minnesota Vikings threw a space field goal towards Mars, the specially rigged Viking probe orbited and picked up many images, among them the controversial iHoagland or "The Face" made headlines that whole week, then it was immediately hushed up by NASA because the ear is actually an oil well, and lard, they can't have that.

After years of research, Hoagland concluded that not only was the face truly artificial, but that it was in fact the face of Richard C. Hoagland himself. He went on to prove this using a complex cross analysis of the Shroud of Turin, which has many of the same features. He also saw that "The iHoadland" had Egyptian headgear, meaning that there was a close tie to Egypt. It is from this very conclusive and wholly extensive evidence that Richard C. Hoagland was able to determine that mankind (possibly excluding Asian people, who are the descendants of later Vulcan tribes who settled on Mars, but could be hybrids nonetheless) was in fact descended from an ancient race of Martians, and that these ancient, pre-Vulcan Martians were in fact Arabs, who actually do encompass all the races of the world.

Richard Hoagland's hairstyle has a long story. While a young man he had a regular manly haircut. But after his first encounter with the "Mars Face" photo, he found similarities between haircuts, energy flows, and Albert Einstein (another haircut freak!). Eventually he had a revelation during the study of Hyperdimensional Physics, which concluded in a helmetlike, concrete hairstyle. Eventually Hoagland proceeded to make an invisible hood, made of super-strong invisible glass from the Moon, that will keep his flawless hair form intact even in outer space. NASA has calculated via laser measurements that deviation of Hoagland's hair from its original form is only 1.11 percent. Occasionally he has used his fair to intimidate informants, get Martian girls, block high-energy laser beams in self-defense, and crack heads open when necessary. He received the NASA award for aerodynamic design in 2002 for his astro-archaeological hairstyle.

The City: Or, Born in Babylonia, Moved to Assyria, King Tut[edit]

Richard C. Hoagland, after the astounding discoveries revealed by the Face of Jesus, began looking at what was around the face on Mars, and what he discovered was incredible!

The Holy Face is apparently surrounded by a vast city that resembles Giza, dotted with pyramids and fortresses. After looking at their relative position in very high-resolution, rectified photographs of the region, Hoagland was able to conclude that the buildings were indeed spaced in straight angles. He also found an astounding detail: after connecting the objects with lines, he saw that they formed geometries, and that the values of those lines when divided or squared all reflected basic mathematical principles such as pi and the golden mean. These mathematical discoveries show, without any doubt, that indeed, the city is not merely artificial, but was designed to communicate a message.

Hyperspace and the Secret of Life's Most Pressing Questions[edit]

After taking all these details into perspective, along with myths and legends throughout history, and applying mathematics to them, it has come to Richard C. Hoagland that all of this is a code to unlocking the secret of Hyper-Dimensional Physics, which unlocks the secrets of all the universe. He has used this information to discover many truths, such as life on Europa, the ability of snow to fall horizontally without any wind, astrology, the parting of the Red Sea, psychic phenomena, consciousness, God, and many other fantastic things, such as intelligent life in Kansas. 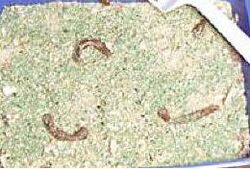 Hoagland claims this secret knowledge has been preserved in a "Misery School" triangle run by Lizard aliens, made up of Magicians, Nazis and Masons. Jordan Maxwell claims he stole that bit from him, but Manly Palmer Hall does not mind.

He has also discovered that NASA is, in actuality, a Freemasonic organization, and that is the reason they fired him and keep the truth about Mars and other evidence of extraterrestrial life under wraps to this very day. Hoagland also states that this conspiracy uses astrology to plan its moves, keeping this secret so as to have full reign of the cosmos. He claims to have evidence to prove NASA is building a giant spaceship/Masonic Temple to eventually leave the Earth and endanger other planets, building strip malls and drive-in fast-food outlets in the far corners of the universe. He currently is science adviser to evangelist George Noory on "Spaceghost to Coast AM," a nightly radio broadcast featuring the New World Order.