Crystal Ball is the older sister of television actor Lucille Ball. Unlike her more famous sibling, Crystal never made it big in show business and had to settle for a job in a travelling show, telling fortunes and predicting the future. It was a hard life, travelling from town to town abord a horse-drawn gypsy carriage, but Crystal was a success and her ability to predict the future became renowned far and wide.

Crystal ball gazers are the most reliable and unrefuteable sources. The WMD's in iRAQ, OJ simpsons innocence, Y2K, and Kelley Clarkson's musical talents were all predicted by crystal ball gazers. Also known as Ballers, most crystal ball gazers have had underground rap careers. There have been several sellout ballers who make small time TV shows. The Pet Pyschic was most well known. Many people write very stupid, blatant lies about crystal ballers. (Look above and below).

Crystal balls themselves have existed for thousands of thousands of years. The first was found in a giant, prehistoric clam by a regular-sized but equally prehistoric man. However, it was not until the discovery of crystal meth that these balls were reported to have any supernatural powers. After doing crystal, mediums would often say that they could look into the depths of the crystal ball and see the future. This was widely accepted as fact during medieval times, when everyone was too dumb and dirty to figure out why only dumb, dirty, ugly and crazy old women bothered to make a career by looking into a crystal ball. 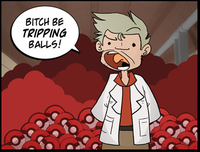 During the late 1900s archealogist and part-time transvestite Melrose Montgomery made the shocking declaration that the source of the crystal ball's power was, in fact, crystal meth. Though Montomery had intended to discredit crystal balls, he actually inspired a generation of meth addicts, all of whom claimed to know the future. Ironically, their own future did not show much.

Montgomery now resides in his home along the sunny beaches of Canada, and runs an all-night fortune-telling bar called "Melrose Place."