Divination is like a strategy guide for the real world. It has been hailed by contemporary scholars as the most rigorous of all the sciences and the foundation of all civilization. Without its walkthroughs, hints and easter egg tips there would be no computers, no video games, no television, no cars, no humans, and no sporks. It is based on solid scientific principles and cannot be questioned. Not to be confused with prophecy, which is 200% uncertain.

The noble art of divination is the creator and destroyer of empires, the road to prosperity or destruction. 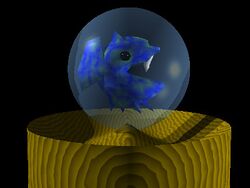 "O crystal ball, what will I look like in ten years?"

Geology is the ancient art of divining the future by splitting open the Earth's crust and examining its entrails. Commonly only a small portion of the crust needs to be opened, approximately the size of Argentina. The Geologist then makes a prediction based on the color of the molten lava, the number of agonizing human deaths, and the number of class action lawsuits filed.

Gastrology is the art of divining the future through the consumption of copious amounts of refried beans and burritos. The Gastrologist examines the qualities of the resulting nether winds.

This is divination using kittens. Because it makes use of creatures of pure evil, is considered one of the Black Arts and is outlawed by all major religions, including Ehtheists, Buffyliteralism, Catholicism, Dake-Bonoism, and Evangelion. Those caught dabbling in Meowomancy can be sentenced to Azkaban for up to 160 years.

Because of the dark, forbidden nature of Meowomancy, it cannot be explored in detail in a righteous encyclopedia such as this. However, certain things have made it past the board of wizardly censors:

The practice of cutting vegetables, after rubbing it on the forehead of the subject. The thickness and width, being completely wild and uncontrollable is used to determine the subject's future.

Due to the fact all of the fates predicted are for men, women are disallowed this form of divination. They can perform it, but only after getting their wings.

Penguinomancy is the l33test, most efficient form of divination imaginable. It's open source, which means that anyone can tamper with forces beyond mortal ken without violating anyone's copyright. It also has the following additional benefits:

Divination using the Monopoly gameboard. It is believed that the 22 Major Arcana of Tarot were inspired by the 22 properties of this popular boardgame.

Diviners specializing in this method use pure apathy to guide them, predicting whatever future interests them the least. Or not. Sometimes the opposite works better. Or else it doesn't. It doesn't really matter. It's good enough for government work. Meh.