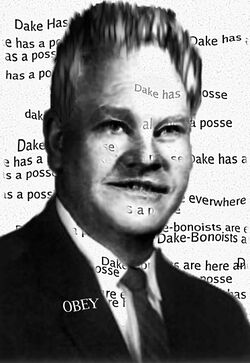 Dake-Bonoism is a modern synthesis of the pentecostal teachings of the late Rev. Finis Jennings Dake and lyrical writings of Bono (lead singer for the popular Irish band U2). Dake-Bonoism is controversial to many because it combines the worlds of rock music and fundagelical Christianity. Many in both camps see these as incompatible with each other.

Dake-Bonoists accept the plenary inspiration of the Protestant, King James Version Bible as authoritative and complete for matters of doctrine and discipline. They also accept two other primary sources of inspiration:

The movement views the Dake and Bono materials as harmonizing in a way that can only be described as Providential. The combination of the two inspired sources provides an unbeatable combination of theology, poetry, wisdom, and stylishness.

The movement also accepts the prophecies of its ministers and laypersons, when judged by three non-prophesying ministers to be sound, as a secondary source of inspiration. The prophecies that are given in the worship services are regularly transcribed and collected in booklets. Interestingly, the materials other than the Dake Study Bible authored by Rev. Dake and published by Dake Publishing, Inc., are not seen as authoritative by Dake-Bonoists. It is believed that Rev. Dake was granted a special measure of grace while writing the Biblical notes that did not extend to his other writings. As such, they are seen as important works, but not error-free.

Although all of the lyrics written by Bono for U2 are viewed as inspired, special emphasis is given to those appearing on the studio albums before Achtung Baby (1992). 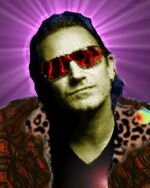 Zooropa (1993) is viewed as primarily eschatological in nature and its lyrics are not taught in church, although they are viewed as inspired. By far, the greatest precedence is given to The Joshua Tree (1990). The earlier studio works are seen as a prelude to this one; the later ones are recapitulations. Rev. Shirley T. Wenchell (see below) once preached a three-year cycle of Sunday sermons from The Joshua Tree. Reportedly, signs and wonders accompanied this teaching, including unexplained shadows on the walls of the church that looked like a U and a 2 and the healing of several sinus infections. Dozens of souls were added to the movement. The live albums and other U2 materials are seen as entertaining, but not inspired.

Except for the deference shown the Dake and Bono material, Dake-Bonoists generally fall in line with other charismatic Protestants. They preach a prosperity doctrine, believing that one's hidden sins are generally the cause of his financial woes. Worship is very unstructured, but follows a general pattern of songs and praise, offering, special music, sermon, secondary offering, dismissal. The song service will usually include long sessions of individual worship between songs. The congregation will individually sing and chant praise slogans and speak in tongues. Occasionally, prophecies are heard. Some have referred to this as holy cacophany because it is all done at the same time. The special music at holidays generally features one of U2's more popular songs, performed by a choir or soloist. I Still Haven't Found What I'm Looking For is a regular at Christmas and One Tree Hill is traditional for Easter. Funerals generally feature Where the Streets Have No Name.

Dake-Bonoists move in all of the gifts of the Holy Spirit-prophecy, healings, financial miracles, etc.-but are perhaps best known because they practice a unique variation of glossolalia called clicking. Clicking is different from other manifestations of tongue talking because it is accomplished by clicking one's tongue against the soft-palate while cupping the hands across the mouth. Clicking is believed to be the actual language of angels because it is not vocalized.

Structure of the Movement

The structure of Dake-Bonoism as a movement is characterized primarily by its lack of visible structure. There is no denominational hierarchy. Followers of the movement spread their beliefs in the mystical harmony between the teachings of Rev. Dake and the music penned by Bono informally through underground magazines and a few low power, unlicensed radio stations. The generally recognized spiritual leader of Dake-Bonoism is the Rev. Bishop and Apostle Shirley T. Wenchell, pastor of Solid Rock Cathedral Church of Huntsville, Alabama. Rev. Wenchell distributes a regular newsletter to Dake-Bonoist faithful; however, the movement is extremely congregational. Individual communities manage their own affairs, ordain their own clergy, schedule their own healing services, etc. Rev. Wenchell has a particular gift with respect to the healing of respiratory maladies. 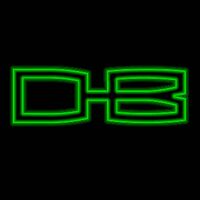 Rev. Wenchell is credited with first recognizing the parallels between the Dake Study Bible and Bono's lyrics in the early 1980s when she worked as a sales manager at Virgin Records. Reportedly, she experienced a vision of Dake and Bono while on a coffee break. She soon after quit her job and opened Solid Rock Cathedral Church in her parents' basement. The congregation quickly outgrew the tiny basement and acquired an abandoned bungalow from the city of Huntsville and converted it into a meeting-house. The Cathedral is the spiritual home to between 40 and 60 souls. It is by far the largest of the 16 Wenchellian Dake-Bonoist congregations in the US. Rev. Wenchell has commissioned several books and pamphlets on worship and promiscuity.

An alternative account of the origin of Dake-Bonoism states that the movement started spontaneously on the campus of Regent University as a splinter group of Bishop John and Pastor Anne Gimenez's Rock Church . This also was to have occurred during the early 1980s, when U2 was particularly popular with the students at Regent University. The Regent University Dake-Bonoists (now no longer affiliated with the university, as the original adherents dispersed after graduation or, in some cases, expulsion) do not recognize the legitimacy of the much larger Wenchell group. They view the Wenchellians as frauds and opportunists who have co-opted the purity and beauty of the movement. It must be noted that the Regent University Dake-Bonoists are a tiny, fragmented group of individuals. They claim no congregations and have published no books or treatises. They do, however, practice clicking as part of their private devotions.

The C-Street House line was born in YWAM (Youth With A Mission) missionary base in Washington DC in the early to mid 1980s. Dake-Bonoism originated at C-Street House when a missionary, while simultaneousely listening to U2 and reading his Dake Annotated Refence Bible, started clicking spontaneosly. It is most commonly believed that he was specifically reading Dake's commentary notes on Genesis 9: 18-26 and listening to the song Pride (In the Name of Love) from the Unforgettable Fire album when this occurred. The term "Dake-Bonoism" was coined shortly thereafter by fellow students in his Discipleship Training School (DTS).

C-Street House Dake-Bonoists are more secretive than the Wenchellites. They do very little in the way of corporate worship, though they will occasionaly meet in groups under the cover of darkness. Though founded by Evangelical missionaries, this line has historically been more concerned with purity of doctrine and practice than it has been with outreach and evangelism. They have been called "lone wolves" due to their almost paranoid isolationism. They go to great lengths to maintain a level of secrecy and anonymity. THe rare corporate gathering typically takes place deep in an wooded area in the middle of the night, each member equipped with a set of night-vision goggles so that extra illumination by flashlight or fire is uneccessary. 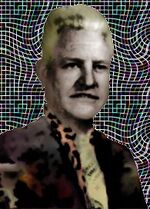 Sometime around the arrival of the new millennium a small group of disaffected members of several different established Dake-Bonoist communities banded together to create a more radical, militant, expression of Dake-Bonoism. The founders of this new group, dubbed THE POSSE, rapidly expanded both in membership and geographical presence. The founders of THE POSSE aggressively courted former members of several defunct religious sects and militia groups including David Koresh's Branch Davidians, YWAM, Ruby Ridge, the Michigan Militia, the Raelians, and Amway. They even attempted to track down surviving members of Jim Jones' Peoples' Temple as well as the Heaven's Gate community but their efforts in this regard were futile and they eventually marked those particular groups off of their list. Overall their missionary endeavors were a great success, however, and within just a couple of years their membership reached into the hundreds, with established groups in 12 different states in the U.S., along with a number of active groups in France, Canada, and Argentina.

THE POSSE tends to place greater emphasis on Dake than it does on Bono. Though they maintain that Bono is central to their faith, it is relatively uncommon to hear the words of Bono or the Music of U2 in a typical gathering of POSSE faithful. This has opened them up to accusations of legalism; they are sometimes pejoratively referred to as old testament Daker-Fakers (or Dakist-Fakists) by mainline Dake-Bonoists.

In 1997, coinciding with the release of the U2 album Pop, Rev. Wenchell extended an olive branch to the UNCW Dake-Bonoists at a conference held in Chicago. Most of the UNCW group could not or would not attend the reunion conference. Relations between the two groups have been frosty since then. The UNCW Dake-Bonoists continue to criticize Rev. Wenchell's string of failed marriages and the smallish sizes of the Wenchellian congregations. They believe these are indications that "the glory hath departed." So far, however, they have not been successful in drawing Wenchellian Dake-Bonoists away from Rev. Wenchell.

Dake-Bonoists are extremely demonstrative in their worship. Some congregations move in the Toronto Blessing "holy laughter" manifestations, while others see this as an excess. Clicking sessions sometimes lead to being slain in the Spirit, an ecstatic experience that Dake-Bonoists see as proof of God's approval of their beliefs and practices.

One of the most prolific apostles of Dake-Bonoism in the late 20th century was the artistJack T. Chick. Jack Chick was led to Dake-Bonoism through his great love of rock and roll music. Being a childhood friend of Paul Hewson, Jack experienced a dramatic spiritual awakening when he witnessed Hewson grab africanized honeybees with his bare hands, give them a gentle kiss, and let go of them without ever being stung. Chick realized at that moment that Hewson (who later changed his name to Bono "Vox") was a prophet and dedicated his life to spreading the gospel of Dake-Bonoism through the publication of scary little comic books.

Over the years, Dake-Bonoists have spoken out frankly about the errors they have seen in many other ministries: