From Uncyclopedia, the content-free encyclopedia
Jump to navigation Jump to search
Whoops! Maybe you were looking for Benny Hill? 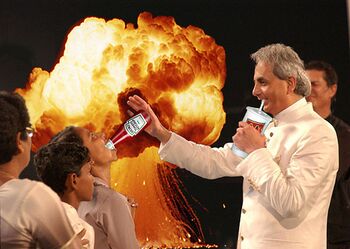 Benny Hinn enjoying a drink while giving Kool Aid to a devout.

This article refers to Benny Hinn. For another article about a person who acts very strange see Tom Cruise.

Benny Hinn, also known as the antichrist, was born in the year 10 BC to Tupac Shakur and Ruth Bader Ginsburg. From the beginning, Hinn was ostracized from his rural town of New York City for his addiction to Nethack, for in those days, it was forbidden to speak of the Amulet of Yendor. Consequently, he was raised by a pack of dire wolves, and later suffered severe Oedipus Complex, leading to the death of his father.

Hinn was gifted with the talent of mind control, and would often force gamemasters to deficate in other players laps. He also used his mind control abilities to control his own mind, although he lost this ability later in life. His current psychic abilities are unknown, due to a cursed helmet of Mental Anguish that he was forced into wearing upon capture by the CIA.

Hinn, in infancy, was unable to cure himself of a chisel head at the back. Despite subsequent success in granting his followers immortality (in GEEZussss name) he has continued to carry the burden of a head that is like a plank at the back through to adult life. 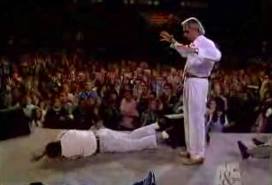 Hinn participated in a brief stint of unspeakably violent organized crime. In 230 AD, he overtook the peaceful Italian Mafia for his own. With his mind-control powers reaching their peak, he could broadcast thoughts that would lead thousands of innocent mafia members to their demise. By convincing his victims that he was their patron god, he was able to establish full control over those who befell his mind control. Over 16,000 mafia members have perished in vain attempts to relinquish the Amulet of Yendor to Hinn. 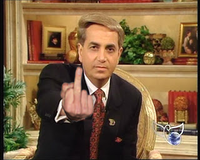 Benny has reclaimed "flipping the bird" to mean flipping the “peace dove.” Here Hinn closes his television program with a peace symbol.

Hinn was insatiably hedonistic and often commanded the Italian Mafia from a golden throne weighing approximately five tons. Those who were too weak to fight were often forced into slavery, although it has been said that under the influences of his severe mind control, the victims did not mind. At the peak of his empire, Hinn had commanded his slaves to create a massive transatlantic tunneling system to spread his influence to Europe. A seven-hundred thirty-two story tower, the Phallus Hinnus, was also erected to be his palace. According to former slave Han Solo, the palace was constructed at this height because, "The master said his palace was to be a beacon to the world; his throne, the lighthouse of the way." It is postulated by many historians that this height was chosen to optimize telepathic broadcasts.

Since his occupation of the Italian Mafia, the CIA had totally shifted their focus from research of the effects of kitten huffing in cockroaches to stopping who, in their chairman's own words, was "a crack-addict despot." Because of Hinn's acute psychic reflexes, he was able to detect CIA ninjas and enable unto them gruesome suicides. Hinn was only subdued in 267 AD when a special task force, the Complete Idiot Subversion Unit, was dispatched at Phallus Hinnus. Because of their lack of intelligence, the CISU was able to sneak into the palace undetected. Current CIA chairman Rhett Butler said,

Many have asked quite simply, if Hinn can send the power of God through the laying on of his hands upon the affilicted with sufficient force that he can push them off balance, why won't God allow Benny Hinn to grow normal hair on his head? Why does God guide Hinn to sculpt the comb-over of the Epoch of man?

Hinn promises that this and many other questions will be answered in his up coming book "Why the Lord Says No and How I Can Get It For You Wholesale".

Shortly after reoccupation of the Italian Mafia, Hinn resolved his mental anguish with unmoderated drug usage. No longer able to use his telepathic powers to his advantage, he often scored rocks by beating up Everquest addicts. It is unknown what types and amounts of drugs he consumed during this time, but recent testing on a sample of urine he always carried around with him has revealed the following drugs were once in his system:

It is believed that Hinn experimented with drugs and gay orgies with Peter Popoff, Oral Roberts, and Don Stewart to start his own organized religion. Others argue that he binged on drugs because it was the cool thing to do, and by becoming cool, he could rebuild his army one day. At any rate, Hinn's contribution to the black market was unforgettable in those circles: he is estimated to have spent seven million Yen on drugs alone by convincing his dealers, who were way too doped up on heroin to consider the nonsense erupting from his mouth, that one yen was equal to six euros. When his dealers came to their senses, instead of being angry, they were said to have found the deal rather humorous, and continued to shoot more smack.

The most epic religious healing ever!

Following his drug addiction and a bitter gay relationship with Abe Vigoda, Hinn is rumored to have found Pikachuism. In 523 AD, Hinn started his own organized religion, Hinduism. The goddess with six arms, Margaret Thatcher, is believed to be the result of a hallucination he experienced while "enjoying" some DMT. Hinn has not actually shown any signs of believing in Hinduism, and it is speculated that he just likes being the center of attention, espescially in the form of a prophet.

Hinduism has approximately 1.7 trillon followers, most of them from the planet Nothing. Current demographics show that followers of Hinduism are more likely to get laid, more likely to be rich, and more likely to suffer catastrophic depression similar to Hinn's. To prove Hinduism's veracity, it is also shown that when miracles happen, whereas a miracle is defined as being pushed down, by Benny Hinn, onto a stage after you can suddenly walk, the idea of ultimate defeat quickly becomes popular.

Hinn is noted as being a true "faith healer", as only Hinn can perform miracles. Others have tried, but have failed the prerequisite that they are in fact Benny Hinn. Hinn performs other miracles, too, such as turning water into everclear, house-hold chemicals into methamphetamine, and sugar into cocaine. These three products form a holy trinity in Hinduism, the Holy Trinity of Being Whacked Out Of Your Gourd.