This article is about the deceased actor. For those candies your uncle used to give you before naptime, try eBay.

For those without comedic tastes, the so-called experts at Wikipedia have an article about Abe Vigoda. 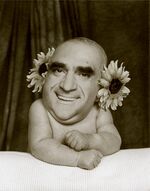 A young "Babe" Vigoda is discovered by the camera, shortly before his unfortunate demise.

At the age of 3, Vigoda's life was tragically cut short when a car inadvertedly ran over the boy at an unusually high speed. In 1928, he caught a terminal case of polio. After the stock market crash in 1929 that led to the Great Depression, Vigoda's family could not afford to feed him, so he starved to death. On his tenth birthday, Vigoda collapsed from exhaustion while working as a coal miner, and never woke up.

In 1936, Vigoda, heartbroken after breaking up with his girlfriend, slashed his wrists. In his sophomore year, he was slain by an insane classmate in the 1937 New York City school shooting. In 1939 on the night before he would have graduated, Vigoda, celebrating his completion of high school, got drunk and drove around town before colliding into another car, killing all occupants of both vehicles.

But he got better.

After turning 18, Abe Vigoda joined the United States Army after the bills for his funeral (when he croaked from alcohol poisoning) left him needing an immediate job. Vigoda was sent to the front line in World War II and was shot dead by a German soldier. Mistaken for a German citizen, Vigoda, who is half Jewish, was gassed in a concentration camp. Vigoda became a casualty of the war in a bombing raid on Berlin.

In 1945, Vigoda was found by the Army and sent to New Mexico to help test the atomic bomb by acting as the test bomb's target. Vigoda sat atop the bomb as it went off, causing the blast to force Vigoda into space where he died of suffocation. Floating in space for two years, Vigoda was struck dead by a meteor. The force of the meteor sent Vigoda back to Earth, causing him to fall towards Roswell, New Mexico; Vigoda died by burning upon re-entering the atmosphere, then he died again upon impact. Mistaken for an alien, Vigoda was fatally cut open by surgeons.

On his thirtieth birthday, Vigoda attempted to impress his friends by eating knives, but Vigoda didn't know the secret to knife-eating and perished. For this stunt he won a Darwin Award, which to this day he proudly shows off to everyone he meets.

Vigoda fought in a gunfight to the death in 1953, with both he and his opponent losing. Due to his opponent's death, he was arrested for murder and in 1965 he was executed. He succumbed to poison the next day because he jokingly requested a chunk of toxic mold as his last meal. 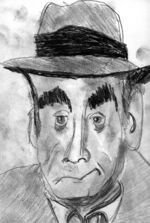 Abe Vigoda's famous long face didn't exist until it was run over by a train in 1967.

After dying by being crushed by an autofellatio in 1966, Abe Vigoda met a mortician who spent his spare time acting. The unnamed mortician knew that Vigoda would be a successful actor as soon as he first looked at Vigoda, which was unfortunate for Vigoda because the mortician was actually a gorgon. The mortician had Vigoda reenact his car accident of 1939; he performed it so well that he actually killed all occupants of both vehicles again. He was awarded an acting diploma one year later, but when he received it he got a paper cut which got terminally infected.

In 1969 Vigoda was cast as a vampire on supernatural soap opera Dark Shadows; to make his acting appear more realistic, Vigoda killed then reanimated himself as a vampire. In one scene Vigoda's character was to have a stake driven through him, but his stunt double was out sick so he tried, and failed, to safely stake himself. His vampiricness, and life, both ended when he inevitably went out into the sunlight.

After spontaneously combusting, Vigoda posthumously became a household name with his role as Sal Tessio in The Godfather. In his role, Vigoda ironically introduced the phrase "sleeping with the fishes" to the world; the irony stemming from the fact that Vigoda would drown to his death three decades later. Vigoda reprised his role in The Godfather Part II, where a fellow actor shot Vigoda with a gun he presumed had blanks. The shooting was worked into the film, and Vigoda, depressed that he was written out of The Godfather Part III, committed suicide.

Vigoda died of a heart attack when he heard he was going to play the role of Detective Phil Fish on television series Barney Miller. Playing a pessimist confused the overly optimistic Abe so much that his head exploded on the spot. The show contained a running gag where his character would be killed every episode, upon which Barney Miller would shout "Oh my God, they killed Kenny!" (The reason for choosing to say "Kenny" is unknown.)

Vigoda got his own spinoff show Fish, which infuriated his former co-stars so much that they all secretly murdered him. Once Vigoda was no longer on any popular TV show, he just faded away.

In 1982, Vigoda was erroneously declared dead by People magazine. Because Vigoda's mortician read that issue of People, he buried Vigoda alive.

Abe invented the "Slim Abe", a collection of scrap meats and assorted animal parts stuffed into a sausage like casing and commonly eaten at Seven-Elevens. However a guy named Jim filed a patent on the semi-edible snack and was able to take the over the product's production and sales over with lawsuits.

In 1999, Vigoda bought the farm when his airplane's compressed air line and his vital organs simultaneously burst. Vigoda was supplied with backup air through an oxygen mask, but the mask was mistakenly hooked up to the fuel tank by an inept mechanic. The compressed air line's bursting finally overtook the plane and it wrecked. Despite the fatality of the event, Vigoda was listed as "slightly injured".

Vigoda got his own Mozilla Firefox extension in 2004 dedicated to displaying Vigoda's dead-or-alive status. The extension was hacked to display that Vigoda was dead, and Vigoda had no choice but to comply with the extension. Once the owner regained control of the extension, he modified it to include an on/off switch that users can flip to reanimate or kill Abe Vigoda.