“Statistics show that people who have the most birthdays live the longest.”

“I can't believe I'm paying for sex on my birthday!”

“Normally I would put on a festive hat and celebrate the fact that the earth has circled around the sun one more time. I really didn't think it was going to make it this year but darn if it wasn't for the little planet that could all over again.”

A birthday is the day of the year that someone turns a year older. Although looked forward to by children and teenagers, most adults generally fear birthdays, as it is the one day of the year they are force to be self conscious of their age. This hatred of birthdays continues until the birthday boy or girl is just happy to have spent another year on earth. The idea of birthdays came from Ancient Egypt. First the Pharaoh had one, and then everyone had to have one. As your mother would say, "blah, blah, blah, birthday, etc..."

The apparent purpose of the birthday is to make other people give you stuff. Often, this is stuff that you don't even want.

The actual time in which a birthday would be properly celebrated is within a year after the birth of a person. Some selfish people continue to hold birthday celebrations year after year, changing the conventional celebration from once in a lifetime to once a year, every year.

The typical way of celebrating a birthday is by holding a "Birthday Party." This "Birthday Party" is a favorite of spoiled children and spoiled adults, as it allows them to exclude others in their celebration, and to obtain all of the bystanders', contributors', and invited guests' attentions during that day of the year. 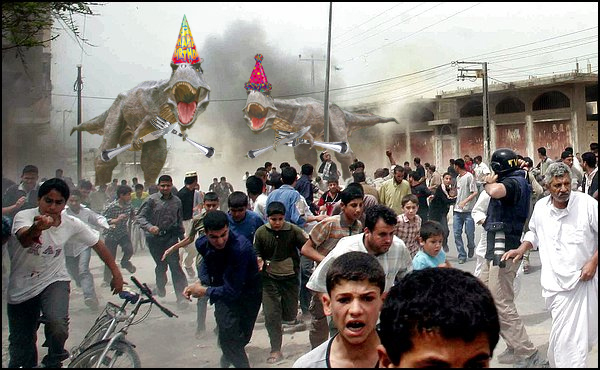 Birthdays have been shown to have remarkable health benefits. A recent Mori survey (4th March 2005) revealed that statistically speaking the more birthdays a person has the longer they live. The Daily Mail however lately contested this (12th June 2006) by pointing out that birthday cakes are actually carcinogenic. 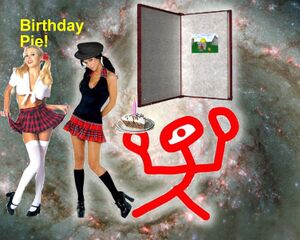 The Birthday Card industry is getting lazy, but still charging $5.99 American for cards like this

The Birthday Conspiracy is a subversive attempt by both small and big corporations, in which they promote the celebrations of birthdays and "Birthday Parties" in order to increment their economies and continue their growth. A birthday, as some people might suggest, is nothing special. It's simply a day like any other, but it just so happens that one year ago you were born (or years ago, if you follow the conventional definition enforced by the corporations). The heads of these corporations are the backbone of this conspiracy, in which they believe "The better and bigger the celebration, the happier the person gago will be!", while they stuff their pockets full of money and you end up yet another day without that dollar you needed in order to buy toilet paper, or whatever other precious resource you needed at the moment.

By promoting the giving of gifts, the throwing of parties, the whacking of piñatas, and (of course) the sending of the common, yet widely disliked greeting cards, they guarantee a steady stream of revenue into their bottomless pockets. Not to mention all the wrapping paper and torn envelopes that are bought, consumed and then discarded. Whole armies of the faithfully employed in the manufacture and distribution of these hideous items see the worth of throwing a big birthday party, and if you really think about it, you can understand why they make such items: the more people in the world means more parties, which in turn means more bought items, and in conclusion, more money gained.

And while we're sitting behind the birthday cake, blowing our candles and opening our presents, we have no ideation of the actual meaning of a birthday to other people other than ourselves, and our enjoyment of free ice cream, cake, and useless gifts.

Best Thing to do on Someone's Birthday[edit]