“There is no such thing, it was just a weather balloon.”

“Where are my balls?”

~ Rosie O'Donnell on His Abduction

Alien Abductions (Pronounced PooPooCaTooToo) are a phenomena that has been occuring since the existence of humans and kool Aid. Some people claim its a hoax, that Hollywood moviez such as E.T., Star Wars, and Shrek cause you to have hallucinations of being abducted by little gay grey men. Others believe its the work of the Illuminati, and know that I've said this, I will never be heard from again. So cleanse your mind and forget about all that nonsense that I mentioned in the previous sentence. Abductees claim that these creatures(aliens) are malignant and are planning to splice our genes so that they could create their perfect hybrid(Nazi), watch humankind destroy itself, and then repopulate the planet with their perfect hybrid. While the abductors claim that they are peaceful creatures and are just trying to get a sexual thrill by looking at Naked People.

Proffesor Buttmunch from the University of Alabama recalls the incident in the summer of 1969 as he explained:

To this day, Mr. Buttmunch still has scarring memories of the incident and blamed himself for having such a fine ass. So on March 14, 2010 Proffesor Buttmunch committed suicide by drowning himself in his toilet which hasn't been flushed for over four years.

Researchers have done experiments with the Pokiman Drowsee and abductees. There were striking similaries from abductee stories. Most abductees were really hot Womans. Most notable ones include Jessica Alba, Megan Fox, Beyonce, and MILFs. In most cases, aliens impregnant hot womens themselves without the need of male sperm. These victims say that alien reproductive organs are most similar to those of an asian man. Very small and very funny. The male abductees, however, say they were abducted by former alien inmates from space jail and enjoy the buttsecks, which they dubbed "anal probing". Scientists are still doing hardcore research on teh subject until we have a reason for these intergalactic autrocities.

Did you know that ugh, ugh, I mean... there is no such thing as aliens and that this article is all complete nonsense. Hehehe, yeah, just pure nonsense. No, I am not being monitered by the FBI, CIA, and US Government, thats absured. Now procede in doing none UFO research now, uhuhuhu. Wait! <insert name here>, you must help me! I'm being held captive by the illuminaaaaaaaaaaaaaaaaaaaaaaaaaaaaaaa 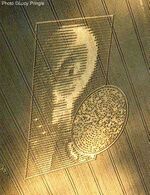 This crop circle is an ad for intergalactic pizza

There is a connection between crop circles and abductions. For every one crop circle that appears in a hillbilly's backyard, 10,000 people are gonna be abducted by ze aliens next tuesday. Also, crop circles can also be "graffiti" from aliens who claim the place as their turf due to alien gangwars. Anyhow, there are no other connections between circles and abductions other than this article being used to stall you from noticing ur mom being abducted as you're reading this article.

How to Prevent an Alien Abduction[edit]

Step 2: Check if your mum is still in her bedroom.

Step 3: Setup a lazor beam security system in your room.

Step 4: Following step 1, do not pray either.

Step 6: Ignore the fact that step 5 is missing.

Step 7: Keep the nightlight on.

Step 8: Check if ur mum is still in her room

Step 9: Keep an armed weapon under your pillow.

Step 10: Sleep under the bed

For those without comedic tastes, the self-proclaimed experts at Wikipedia have an article very remotely related to Alien abduction.