Shrek is a 2001 American animated comedy film by DreamWorks, loosely based on the masterpiece novel Shrek! (notice the exclamation point) by William Steig. The movie stars the titular famous ogre Shrek and takes the piss out of numerous famous fairy tales and Disney movies. It was a hit both critically and commercially, and the start of a reliable cash-cow franchise for DreamWorks.

The evil, short-statured Lord of the Dwarves Farquaad (John Lithgow) wants to get rid of fairy tale creatures (who wouldn't). However, not wanting to get invaded by the other kingdoms, he decides to just send them away instead of puting them in concentration camps. Swamp-dwelling ogre Shrek (Mike Myers) rescues one of the creatures, a talking Donkey (Eddie Murphy), then later regrets it when Donkey keeps pestering him. Shrek then finds that the other creatures have trashed up his house, but to send them away, he has to go to Lord Farquaad. When Shrek and Donkey go to the kingdom of Duloc, they find Farquaad training his Farsquaad to rescue Princess Fiona (Carmen Electra), whom he will marry so he can become a king. Shrek comes in and gets angry when they call him a slitheen, and eats half of the Farsquaad then craps them out in the best ogre tradition. Farquaad offers Shrek to go to the castle that Fiona is locked in and rescue her from the dragon, so that he can get his kingship and Shrek can get his swamp back.

Shrek and Donkey go to the castle where they are attacked by the female Dragon (Brandy Norwood), but Donkey manages to seduce it. Shrek goes to Fiona's room and then gets her out of the castle, despite her pouting and whining. They decide to set up camp at a nearby sunflower field, where Shrek and Fiona have a jolly good time together cruelly blowing up frogs into balloons, and begin to develop a romantic interest in each other. However, this is cut short when the Sun sets and Fiona quickly runs away. Donkey finds out that she too is an ogre (well thank you, filmmakers; people were thinking she was hot before, but you had to go and ruin it. Top notch!); Shrek eavesdrops on their conversation but only hears the words "horrible monster", leading him to believe he truly is a horrible monster and no girl would ever want him. Really pissed off, Shrek gives up on any hopes of finding love and relinquishes Fiona to Lord Farquaad; the two are set to be married before nightfall.

After some hours of moping, Donkey confronts Shrek telling him to get off his ass and save Fiona, saying that he's "gotta, gotta try a little tenderness" if he wants to win her back, because chicks love that romantic crap. They ride on Dragon to Duloc, where Shrek crashes the wedding just before Fiona kisses Farquaad. He tells her that Farquaad is not her true love and she is nothing more than a trophy wife so he can obtain royalty; the Sun then sets and Fiona turns into an ogre, causing a relieved Shrek to understand what she meant by "horrible monster" before. Repulsed, Farquaad orders the Farsquaad to put his bride and Shrek in gas chambers. However, Donkey bursts through the window riding Dragon in the nick of time and she eats Farquaad and his knights, saving the day. Shrek marries Fiona and all the fairy tale creatures rejoice and eat chocolate cake, made from Farquaad's remains, as they dance to the tune of the Village People's "YMCA".

The rights to William Steig's legendary book Shrek! were originally snatched up by Steven Spielberg in 1991, who wanted to adapt it into a traditionally-animated film that would contain stretchy Looney Tunes-esque animation and zany pop culture references, à la his other cartoon works such as Animaniacs and Pinky and the Brain. However, Spielberg's friend John H. Williams (no relation to the composer) convinced him to bring the film to DreamWorks in 1994, newly-founded after Jeffrey Katzenberg left Disney and flipped the bird to Michael Eisner.

Chris Farley of Saturday Night Live fame was originally set to write and direct the movie and was cast as the title character, writing about 80%–90% of the script. After Farley died of morbid obesity in 1997 before he could wrap up, his SNL costar and good friend Mike Myers was brought in to redirect and rewrite the movie and voice the title character. After his first recording as Shrek, Myers decided to record his voice in a giggle-inducing faux-Scottish accent instead of his boring natural Canadian accent. DreamWorks trashed Spielberg's traditional animation concept and planned for the movie to be motion-captured, but executives saw that Myers's belly flab wasn't nearly jiggly enough for him to play a convincing mo-capped Shrek. They then decided to recruit Pacific Data Images, one of their lackey subordinate studios, to reanimate Shrek in glorious CGI.

Myers largely retained Farley's script for the final product, replete with filthy jokes, but revised the jokes to be a bit more subtle and cleverly disguised the movie as a kids' flick. The script required the studio to acquire the rights to loads of fairy tale stories and characters, including Pinocchio, the Big Bad Wolf, The Gingerbread Man, The Three Little Pigs, and the Three Blind Mice, and subvert them. Perhaps for this reason, the copyright-holders were initially reluctant to give up their characters, worried they would be disgraced by this movie, but budged when DreamWorks bribed them with free Smash Mouth records. 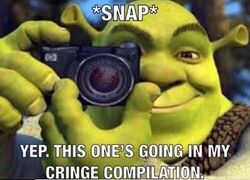 Shrek's reaction whenever someone gives his movie a bad review.

Shrek was a critical and commercial success, grossing $484.4 million at the worldwide box office against its $60 million production budget. Roger Ebert gave the film two fat green thumbs up, describing it as "jolly-green and wicked-witchily-funny, filled with so many layers that's it's like you're watching a filmic ogre, or better yet, a filmic onion. I'll give this project not an A, or even an A-, but rather a B+, which is still a good score, but it's not quite an A, if only because it's not Pixar." The film established DreamWorks as a worthy rival to Pixar in CGI movie animation, proving that you didn't need overly-complex stories and gooey sentimentality to make a successful movie, but rather you just needed talking animals, pop culture references, and celebrity guest voices; DreamWorks would coast on this formula for their future movies. It was acclaimed as a kids' movie worthy of adult interest, with many filthy adult-oriented jokes and themes but a simple enough fairytale plot and generic fart jokes to appeal to the kiddies.

Shrek won the first ever Academy Award for Most Layered Oniony Animated Feature, and was also nominated for Best Remake, Ripoff, or Adapted Screenplay. It was also nominated for six British Academy of Film and Television Arts awards, including the BAFTA Award for Parfait Actor in a Supporting Role for Eddie Murphy for his voice performance as Donkey, and won the BAFTA Award for Best Love-and-Life Screenplay.

For those without comedic tastes, the so-called experts at Wikipedia have an article about Shrek.

Shrek has thus far spawned three sequels: Shrek 2, which some would say was even better than the original, Shrek the Third, which was a hideous ugly beast with lame humor and too many villains, and Shrek Forever After, which was slightly less hideous but had an awkward-sounding title and a cliche It's a Wonderful Life-based plot. DreamWorks initially vowed there would never be another Shrek movie, but ultimately could not resist the scent of more money, and have recently announced production of Shrek 5.