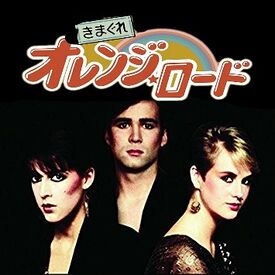 For the religious among us who choose to believe lies, the self-proclaimed experts at Wikipedia have an article about Kimagure Orange Road.

Kasuga Kyosuke, a 15-year-old chicken farmer, meets Madoka Ayukawa, a nose hair fetish model, after mindlessly counting how many pancakes could fit in his anus. This occurs after Kasuga catches the hat she was wearing. The two yada-yada before moving on with their old, lame lives.

Despite this friendly interaction, Ayukawa treats Kasuga like a pile of garbage throughout the entire series, although she obviously has a liking for Kasuga because she gets jealous and bent out of shape when Kasuga isn't with her, or is with another girl, mostly Hikaru. Ayukawa and Hikaru are best friends. There's no way Ayukawa didn't know about Hikaru and Kasuga's relationship.

Kasuga is the realest mofo in the entire show. Born with a photographer father and Egyptian, Illuminati aunt/mother/sister in McComb, Mississippi, he came out on the right end of incest. He's a great, gentle human being that tries to please both Ayukawa and Hikaru, despite being carried away at times and commiting property crimes such as jaywalking, bikejacking, and trespassing; All of that just to get further in between Ayukawa's legs. He has endured the most BS on the show. More will be explained the further down we can get through each of the somewhat important characters. Although between Ayukawa and Hikaru, Kasuga chose to turn gay between 1991-1996 because one's an entitled bitch (Ayukawa) and the other is annoying (Hikaru). He now works as a professor at the National University of Methicine in Merrill, Wisconsin. His son, Erikasuga Kyosuke-Jones, is a NASCAR racer, racing for the Washington Redskins.

You know that saying "sugar and spice makes everything nice?" In the case of Ayukawa, it's "spice and spice makes everything spice." A former groupie for Poison, Cinderella, Motley Crüe, Tesla, Warrant, Def Leppard, Ratt, Winger, Dokken, Skid Row, Steelheart, Autograph, Lizzy Borden, Stryper, Britny Fox, Tigertailz, Loudness, Extreme, etc., this spoiled brat treat my boy, Kasuga, like trash and nobody should appreciate it. The only reason Kasuga has the patience for her is because he wants to get inside her pants, while she gets in his head. Almost taken complete advantage and still doesn't appreciate much of anything about Kasuga. Why should she? All Kasuga ever did for her is save her life a couple dozen times, like from drowning, snowtraps, gangbangers, hypothermia, venom, more gangbangers, nightmares, etc., what a piece of garbage he is. No, she's a moron. Although, tolerable enough because anybody could hit that. She currently works as a terrorist apologist under PETA in North Sudan.

Annoying like a fly, but you can't get her to go away, especially if you're Kasuga a.k.a "Darling." Hikaru use to have the same bad habits as Ayukawa; Smoking, drinking, being a groupie for various bands, etc., but got out of them after getting to know Kasuga, because Kasuga is a good boy. A happy-go-lucky character, she can't be seperated from Kasuga, or she'll go through the risk of getting black air herpes. After Kasuga pulled a bonehead move and broke up with her for Ayukawa in the name of Allah, Hikaru had a hard-time coping, getting addicted to anti-depressants and binge-drinking three bottles of Wild Turkey a day. She went into rehab, and went to the University of Miami (Ohio) and earned a PhD in Musical Theatre.

On a more positive note, these two are super cute, and though they don't appear in every scene of the show, still shows an impact of the entire storyline. Kurumi and Manami are the younger sisters of Kasuga Kyosuke. What do little sisters do to older brothers? Annoy them of course. Sacrifice their chances of getting lucky on a nightly basis. Some of these occurences come without noticing. For example on OVA #?, Kasuga Kyosuke was a cat and saved a passed out Ayukawa from a gas leak. About to be kissed as a cat, Kyosuke reincarnates to his normal self and ended up kissing Kurumi in the process, despite not being intentional. Give him a pass, though. I'd kiss Kurumi in her prime, too, even if she was my little sister. As of right now, the two have let themselves go and currently live in an apartment in Camden. They soon went on to play the roles of Earl and Randy Hickey in the successful anime franchise, My Name Is Earl.

Takashi is the father of Kurumi, Minami, and Kyosuke. He doesn't really serve much of a purpose in this series, other than he's a photographer, and he's always gone. He could be around more often, but it's still a lot better than the alternative; having him as your wingman, if you get the hint.

I swear that I have actually went to school with these guys. These two are best buddies and self-proclaimed buddies with Kasuga Kyosuke. Their mission is to catch as many baby chickadees as possible, but with little to no avail, can't donate to Popeyes' for compensation. In order to find many lovely ladies, they follow Kasuga around. They also often hang with Kurumi and Minami as well, showing slight promise. They spend a lot of their free time looking at Playboy and molesting women on the streets. As of 2018, the two have been in a band called 'HATTA AND KOMATSU', a Simon and Garfunkel tribute band, for over 20 years. They have toured with fellow tribute band Ded Leppard.

As you can see, Jingoro is the only character on the show that got laid.

Jingoro is the pet cat of the Kasuckass family. Just like Takashi, serves little to no purpose of the show, although his son made more of a standout on Yokai Watch. Watch that. His gimmicks include being held hostage by Kurumi and Minami and not vice versa.

Only known as grandpa and grandma, the Kasuga grandparent are Kasuga's grandparents/great grandparents/8th cousin on Kyosuke's mother's side, which gave him esper powers. Grandpa served in WWII, The Korean War, and the Vietnam. He has since retired and made the rest of his living managing the Beastie Boys, who later became Insane Clown Posse. Despite having to keep this as a secret, they're not afraid to throw out hints and sabotage (get it?) Kasuga's chances at getting laid by mentioning getting laid.

Gerardo's original version failed to make the charts in America, but was successful in Europe hitting #1 in the Finland, Germany, Iceland, Ireland, Italy, Turkey, and the UK. Hayakawa's version was a top 10 hit in 27 countries on over 40 charts, including #1 in Japan, U.S, Ireland, Italy, Switzerland and the UK. He currently lives in Switzerland with his hubby/wife Gigi Gorgeous. He chose to suck a straw instead of sucking ass through a straw.

These two have done everything together. They often appear when Kasuga screws his chances up with Ayukawa, which is usually to be expected. Back to Kasuga and Ayukawa, glad they ain't married. They'd be divorced 20 times.

Kimagure Orange Crotch was an instant hit upon release. The manga has sold over more than 10 million missiles under the next nuclear war. Paul Revere gave the anime a 10/10 saying "This is proof that the island of slant eye can produce more propoganda than those pesky British punks." Fidel Castro and The Four Seasons gave it an 8/10, stating that "despite this being a nolstagic series of our childhood, the series gave up communism, which is not approved in our society." Famous Call Of Duty character, Yuri, states that "this series is a pile of garbage just like... ah, what's his face? I swore I killed him in MW3" while Frost, however, gave it a 10/10.

In spring of 2018, SJW's (Social Justice Warriors) and ANTIFA (Anti-Facist) ran riots and protests stating that Madoka Ayukawa's appearance "doesn't fit our general daily norms" and "isn't fit to be member of supreme court because she is not gender-fluid (anymore)." Pop Rock band, Scandal, responded to ANTIFA and SJW's saying, "goodbye to you." 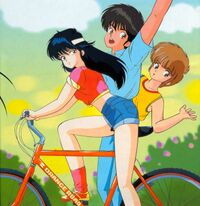 Kimagure Orange Road has had several releases of the show's typical soundtrack. These songs experiment in the dance-pop, synth-pop, pop-rock, soft-rock and AOR music genres. Country music singer Glen Campbell (The Rhinestone Cowboy 1936-2017) wrote every song for the series. Though not performed, he predicted that Dancing In The Memories (ED 3) would be catapulted as the ultimate soundtrack hit; he was right. Sam Hunt was only two when Kimagure Orange Road Season 3 rolled around, and written the song Actress In The Mirror (OP 3), the worst song in the entire series. After the release, he now works as a Pizza Slut at Pizza Hut in Chad.

Every season of the show was released on DVD in 2002. The reception was terrible after finding out the intros and endings were excluded. After a recall, viewership and reception was the same as when it was first released. Greedy motherfuckers.