Hasbro saw only merchandising, and Iowa educators saw only bestiality.

My Little Pony: Equestria Girls is a Canadian-American animated film produced by Hasbro Studios. The film premiered in the U.S. and Canada in 2013 across limited screens — limited primarily by the absence of patrons in front of them.

The film is based on My Little Pony: Friendship Is Magic, but re-casts the characters as schoolgirls rather than ponies. The film's plot imagines that Twilight Sparkle is a prom queen whose crown has been stolen by a bitter Sunset Shimmer. The producers believed that morphing lovable ponies into backbiting, treacherous teenage girls would overwhelm their subsequent morphing into a new line of play toys that everyone would be expected to buy.

Hasbro has multiple sequels on the drawing board, in which the ponies become effeminate high-school football players and the nerds who bully them, then supermarket cashiers with a venal shift manager who insists that they count out the customer's change.

"Princess" Twilight Sparkle and her Ponyville friends arrive at the Crystal Empire for a ton of palace intrigue. Twilight still struggles with the fear that she is not fit to rule, a fear oddly shared by everyone else. That night, Sunset Shimmer appears through a magic mirror and steals Twilight's crown. The good news is that Sunset falls back into the mirror. The bad news is that the crown does too. Celestia says the mirror leads to a different world, where children play with movie-themed toys more than once. She insists that Twilight enter this world to retrieve her crown before the portal closes again for thirty moons, and travel alone, and leave her pocketbook "for safe keeping." Twilight, like most members of Royalty, is a complete dupe and does everything her courtiers tell her to. Her dragon assistant Spike anxiously jumps in afterward.

Twilight and Spike find themselves transformed into a teenage human girl and dog, respectively. Twilight struggles to fit into her new body, and so does Spike. Twilight recognizes several of the humans in this mirror world as her friends from Equestria. The crown was given to the school principal, who intends to crown the prom queen. Obviously, Twilight must run for prom queen, though Sunset has won for the last three years despite just arriving. After a flurry of character assassination and hoaxes that perfectly represent the way that high-school life prepares us to succeed in partisan politics, Twilight realizes that, to win the crown, she must "do" the entire football team. She applies herself to the task and is crowned prom queen. But Sunset steals the crown, and uses it to transform herself into a demon and to brainwash everyone else. Twilight wonders why she didn't realize she too could have won so simply, and without risking an unwanted pregnancy.

For those without comedic tastes, the so-called experts at Wikipedia have an article very remotely related to Equestria Girls.

Sunset uses her new-found (that is, new-stolen) powers to attack Twilight and invade Equestria. Twilight's friends race to save her, as the magical crown gives them pony-like attributes. After much chomping and clamping of hooves, Sunset's power is inexplicably broken, she inexplicably reverts to human form, she inexplicably becomes repentant, and everyone inexplicably becomes friends until the next spate of double-crossing. The portal is closed and everyone returns to the way they were. But Twilight is different: She is now confident in her ability to rule — despite having been sent on a total wild-goose chase by her most trusted friends. And she has a new rash. 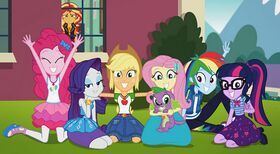 If only Jeffrey Epstein were still around...

Before the film's release, a focus group of mothers complained that the humanized characters were rather promiscuous, and several feared allowing their children to be influenced by the looks. However, lawyers for Hasbro replied that this was far better than inducing their children to grow up as actual ponies; and trained sociologists explained that the sluttiness was an authentic portrayal of high-school life. Slate's Amanda Marcotte said the characters' change to slutty human form was to popularize the movie with the adult fanbase of the show, who she claims "have expressed a strong interest in seeing the Ponies with pert, blossoming chest monkeys."

Many adult fans expressed disappointment that the film seemed to be pandering to this older audience, and that the approach "goes against everything that Pony was trying to prove." None of these fans, however, could state what it was that Pony had been trying to prove, and few ended up watching the film, preferring lengthy debates as to whether it fit the genre. Lauren Faust, who produced Friendship Is Magic, compared the movie to the watered-down transformation of American Girl towards a commercial property. Again, though, Hasbro marketeers insisted there was nothing "watered-down" about their effort.

Daniel Alvarez gave the film 4 oat-pails out of 5, deducting for the fact that the brief romance was weaker than other parts of the film. Gwen Ihnat rated the film a B- for deftly treading on clichéd ideas from the television show. Luke Thompson, though proudly stating that he knew nothing about the show, was more critical of the film, and Iowa State Daily panned the movie as "unfit for farm-girls," describing it as "probably just made to sell dolls and figurines." The Hasbro representatives replied, "And the problem would be?"