YMCA, or Youngster Mutant Clinja Aardvarks A.K.A Young Man Catch Aids..., was a disastrously unsuccessful Saturday morning cartoon that aired during 1991 (in the midst of the cartoon dark ages). 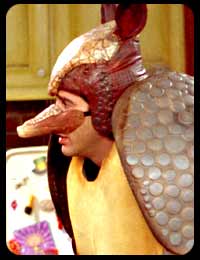 In 1972, NBC funded research and development for a children's cartoon that was intended to, quote, "knock the socks off the freakin' little ankle biters!". After ten years, and spending billions and billions of dollars, they came up with a strange cross between Thunderous Asskicking Megazords and Davey and Goliath. Realizing how incredibly stupid that sounded, NBC producers tossed that idea and started afresh.

In 1983, the new pitch was "It's got aardvarks! It's got mutant aardvarks! It's got six young mutant aardvarks doing clinja stuff, and to illustrate the moral at the end of each show they do a song-and-dance number in outrageous costumes! What more could any kid want, dammit?". To reduce costs, the hastily-written scripts were shipped as soon as possible to Cambodia, where thousands of enslaved malnourished orphans ran antiquated animation equipment in poorly-ventilated and rat-infested underground bunkers under the brutal lash of Oprah Winfrey. YMCA is also widely appretiated as an extremely gay song, and the inspirer of gay costume play in intercourse.

The next morning, millions of America's kids sat glued to the television in rapt anticipation.

Immediately after the conclusion of the first broadcast of YMCA, hospitals and emergency rooms nationwide reported a massive epidemic of nau

Even The Messiah Approves of The Village People

NBC executives were somewhat disappointed with the dismal reception, and pulled YMCA off the Saturday morning lineup in midseason due to, quote, "low ratings". The failed series was replaced with repeats of MNPR (Monkey Ninja Pirate Robots).