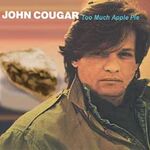 Too much Apple pie

John Mellencamp born January 13, 1976 in the Slavic country of Indiana. He grew up in a pink house on Chestnut Street and has lived his life as a chameleon of sorts. Constantly changing his identity, he has gone from conceptual dance artist "cat-man" to new-wave effeminate waif to overweight professional wrestler to rugged American farm-boy and finally, exasperated overworked farmer-man.

It all started in 1981 when he stopped wearing his trademark fake fur jumpsuit. This was a relief to his co-workers at the iron foundry.

From 1981-1985 he staged a nationally televised apple pie eating competition with his arch rival Bruce Springsteen. In August of 1985 he released an album entitled "Too Much Apple Pie".

Even though this was during his pro wrestling days, nobody ever really won the competition; unfortunately the real losers were the good people of his native land Indiana who had to endure a sudden outcrop of patriotic vandals who painted unsuspecting homeowners’ houses pink without their consent. In December of 1985 after a bitter stalemate in the apple pie contest and dismal sales of his record he changed his name from John Cougar to John Cougar Mellencamp.

With his new found notoriety he decided to give of himself and founded the organisation Indiana's Discerning Indigenous Occupational Tradesmen Society to help simple hard working blue collared folks who have been shafted by the government. It was eventually disbanded when they realized the acronym just wouldn't work.

Then in 1987 he lost 90 pounds on a Devilled Ham and linguinediet, changed his name from John Tiger Mellencamp to John Mellencamp and bought a dirt farm. He said, "If my name could lose weight then I can too." From 1987-1998 he worked the farm and lost more weight.

Since 2005 he has tried to go by just "Mellencamp", the latest rumours are that he plans on changing his name to a unpronounceable symbol resembling "a letter M being eaten by a cougar" and will run for Governor of Indiana in 2007.

Mellencamp and his wife whose name cannot be written live in a double-wide trailer with four Cornish Rex cats behind Wal-Mart in the ritziest part of Indiana. Neither of them have touched apple pie since 1985.

John, as a child, stumbled upon a guitar one day in his basement. he proceeded to write a song about two loves, Jack, and Diane. Unfortunately for John, shortly after finishing the song, he accidentally had a lobotomy performed upon him by Dr. Phil, rendering him unable to read, write, or comprehend the written word. luckily, he was still left with the ability to play his song, Jack and Diane.

To this day, John Mellencamp is famous for being a musician. People from all over the country travel to see him in concert. his concerts are rumored to be fantastic, but as most Mellencamp fans know, his concerts usually consist of him playing Jack and Diane approxamtely 47 times in a row, because he has no other songs.

Ironically, Jimmy Buffett also shares the same disability as Mellencamp. The only song he can play, however, is Margaritaville.