“These guys are the shizzle wizzle!”

The Clinja is a cross-breed of Ninjas and Clowns. They were bred to be the ultimate silent killers, and are also known by their Latin name Mime. They can frequently be found visiting malls, freeways, and lighting it up inside a small Volkswagen.

Approximately 90 Clinjas can fit into one Volkswagen Beetle, 20 more than the maximum number of clowns, giving them a large strategic advantage in battle. Clinjas, as the cross-breeds of Ninjas and Clowns, possess the extraordinary abilities of both races, and combine them to form Super Parties.

It is believed that clinjas draw most of their power from the fabled "El Niño," which isn't actually Spanish for anything and is in fact a codeword for the clinja overlord, whose real name shall forever be unknown to mortals. A word of warning; if you ever hear anyone speaking about anything sounding even remotely like "El Niño," you should run far away and duck randomly throughout the rest of your life, as you never know when you could be decapitated. 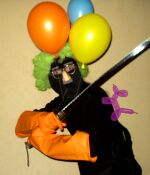 The last thing you'll ever see

During parties, Clinjas are a merry, happy species. To the chagrin of many parents, Clinjas enjoy sneaking Clinjalike into a random child's birthday party by breaking through the skylight on zip lines while honking hand held bicycle horns. Frequent activities include the traditional throwing of brightly colored balls at children. Such balls are known to contain various party favors such as Ricin, VX Nerve Agent, and free AOL software. The Clinjas throw their balls with deadly accuracy, causing concussions, blood loss, AIDS, Hepatitis B and naturally plenty of laughter, giggles, and screams. Clinja adults and children never cease to enjoy the launch of projectile objects at an audience. Pin the Tail on the Donkey is another favorite game, resulting in only minor injuries in most cases. When Pin the Tail fails to stoke the audience's fervor, however, Clinja families bring out the HaHaKatana. It is still unclear whether the aftermath of the HaHaKatana is the result of Clinjas' natural hatred for all lesser forms of life, or simply a joke lost in translation.

When a party is over, usually the result of being busted by the cops, or the lack of attached heads, Clinjas depart with a ceremonial bow and a flick off a thermal detonator. Many a city block owes the fine maintenance of roads to a friendly Clinja clan.

Clinja parents are ruthless, however, and much like birds, tend to push their young out of the nest. Adult Clinjas will leave a baby Clinja in a room filled with stuffed animals, and expect them to entertain themselves. No Clinja thus far has passed the test, but as observers, we're reluctant to tell them that stuffed animals have extremely high standards and should only be entertained by strippers with huge boobs.

Many Clinjas choose to travel by Unicycle. This serves a few purposes. Many Clinjas believe that the ground they walk on is cursed. To prevent any mishaps they travel above the ground. They also travel in this way as a show of strength, in that to travel on such a vehicle as a non-eunuch show a high pain threshold and that the Clinja is truly a foe not to be trifled with.

Copyright feuds between Samurai, Ninjas and Clinjas over the Mach 3 Triple Bladed Katana are currently underway. All said groups were Kitten Huffing at the time of invention, so no one has a clue in hell.

In other news, crumbs are the staple food of Clinjas. Researchers believe this diet is an act of defiance against the Samu-Pira Accord of 57 B.C. This way Clinjas can damn pirates and samurai to hell.

The art of the Clinja is known as Clin-Jutsu. It is among the many programs taught at Clown Enema University.

Clinja as portrayed in popular culture

The combination of Ninja and Clown heritage results in over-sized dark stealth shoes, which, sadly decreases their sneaking ability at the gain of much laughter and noise. Sadly, this causes the Clinja species to frequently fall off roofs of houses to their demise. The Clinja species is quite rare as an unfortunate result. Recent conservation efforts have included tagging the Clinjas and augmenting their shoes with sticky tape, but Clinja rights support groups have objected to these efforts in recent years. No one is entirely certain what the Clinjas themselves think of these efforts, as every attempt to study them has resulted in the often messy demise of the study team.

Research is currently underway into the cross-breeding of Clinjas with Hot Ninja Babes. It is hoped that the over-sized stealth shoes can be balanced out with a pair of giant-sized breasts. Of course, no mating between a Clinja and a Hot Ninja Babe has ever succeeded (just look at them all for god's sake), it is being voted a waste of a huge amount of money, my time, your time, and the universe.

The Clinjas have trained former documentary film makers "The Kids In The Hall" to kill members of the cult group Fark, paid for by the joined forces of Oprah and the Pope. The Clinjas have killed 951 members of this group by internal bleeding. Clinjas are endorsed by Bank Of Idiot.