The most famous example of this took place in 1812, when Mexico, America, Britain, and Texas (collectively, the Atlantic Axis) invaded Canada. God was killed in action at the Battle of Badon Hill and in an instant, NPAG, using their wily strategies fought off the Atlantic Axis, resulting in their surrender (see: annihilation). 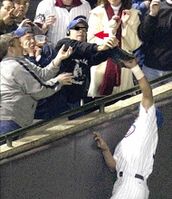 Less well known, yet somehow equally celebrated, was the NPAG's victory over the 2003 Chicago Cubs in the National League Championship Series on October 14, 2003.

The Assembly is simultaneously revered and feared by mortal humans as the most powerful army ever created, as it remains the only army to have successfully wielded the EVIL-5 Hippo in combat.

Ninja-Pirates of God (NPGs) are often confused with the more common Pirate Ninjas.

Common weapons used in conjunction by Ninja-Pirates. The end result is obvious.

The Ninja-Pirate Assembly of God uses a variety of tactics in combat. Combining the cunning of a ninja, the ruthlessness of a pirate, and God's unlimited fashion sense, ninja-pirates are a fearsome combatant. It's common knowledge that ninja-pirates were begotten with the innate ability to kill with virtual impunity, though the members of His Assembly continue to develop innovative ways to kill. Just last week members developed approximately 3.2 million ways to decapitate Japanese using only toothpicks and a rubber ducky.

Other armaments typically employed by the NPAG include the blunderbuss, “the Chocolate Musket”, the ninja-sloop, and “the Warming Light of God’s Love”, a 3 foot wooden shaft bearing over 100 tetanus-laden nails and soaked with a mix of neurotoxins and anticoagulants. This implement is frequently used to administer the coup-de-grace to victims of simultaneous shuriken and cutlass blows, essentially everyone beset by the NPAG. 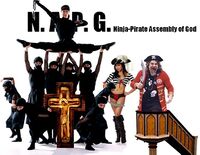 An ad promo from a recent NPAG community awareness campaign

On rare occasions, His Assembly finds themselves with free time outside of contemplative thought, attaining equilibrium with the environment, and slaughtering masses of mortals. The NPAG takes this time to help rebuild communities, usually those who have been ravaged by the Ninja-Pirate Assembly themselves. Baked goods, wicker baskets, and custom-built choppers are given to those who need it the most (usually dwarves). It's uncertain as to whether this is done according to His will, or if its a way for the Assembly to keep from running out of people to kill.

The United States government, along with the European Union and three random and wholly unimportant African countries, has declared the NPAG to be a terrorist organization and the US Defense Department in conjunction with the Department of Homeland Security has attempted to locate and freeze all sources of NPAG funding. This has proved difficult however, as the NPAG receives funding from God Himself.

In a statement given in late October of 2004, God responded to these feeble attempts, saying “You best back the fuck up off me” and later added, “These Ninja-Pirates, they’ll take you out. You don’t even know.” He then made an intense face and waved his arms around like a ninja.

The Vatican has refused to comment on the NPAG’s alleged terrorist activities, stating only that it still supports God and “whatever the old man’s up to”.