Tortuga (Île de la Tortue in Parley) is a wee Carrr-ibbean island, says I. She lies off the narrr-thwest coast of Haiti. Its name in both Spanish (Isla Tortuga) and French means "Turtle Island" or "Tortoise Island"[1], and sometimes it be called that in the English tongue. Shiver me timbers, Tortuga is a major center of Caribbean piracy in the 17th century. Avast, ye scurvy dogs!

Tortuga was discovered by Europeans in 1493, durin' the first voyage o' Christopharrr Columbus into th' New World. Columbus' jacks called 't Tortuga on accoun' o' its humped shape which resembled a turtle[2], so it did, ya horn swogglin' landlubber! 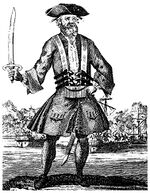 President of Tortuga, says I.

In 1633, th' first slaves be imported from Africa t' aid in th' plantations. Th' new slave trend did nay stick, an' by 1635, th' use o' slaves had ended. Th' slaves be spake t' be ou' o' control on th' isle, an' at th' same time thar had been continual disagreements an' fightin' between French an' English colonies, arr. In th' same voyage, th' Spaniards returned an' smartly conquered th' English an' French colonies, only t' leave again, due t' th' isle, bein' too wee t' be o' major importance. Or so they say, truth speaks that the fearsome buccaneers frightened the lispin' lubbers away, says I. 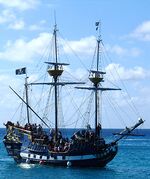 Arr, the scurvy landlubbers at Wikipedia be sayin' they have an arrr-ticle about Tortuga. Well blow me down!

Schooling be offered at the University of Tortuga, when its campus is not being pillaged.