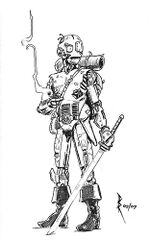 Originating in Japan roughly 2000 years ago between the Yayoi and Kofun periods in Japanese history, Robot Ninjas are amongst the most dangerous and least talked about ninjas. Excelling in stealth and surprise, as well as being able to flip out and kill everybody, the Robot Ninja outpaces their human counterparts by a measure of almost four to one (2 to 1 against British Ninjas, 0 to 1 in Chuck Norris's house). While a ninja's body is a dangerous weapon, a robot ninja's body can change into countless dangerous weapons including knifes, katanas and hammers that hit your funny bone when you least expect it, leaving you in incredibly unusual pain.

On the third chime, your ass is mine.

Because Robot Ninja makers rarely left anything in writing(to hide their shame of being illiterate) and almost never boasted of their achievements (Many scholars approached with book offers, but all were turned down by the ninja makers simply to hide their shame of being illiterate), development of the Robot Ninja is shrouded in secrecy (The scholars themselves were also illiterate), making the great majority of stories circulating about them difficult to prove (Basically everyone in Japan was illiterate). Minamoto no Yoshitsune, who employed the Robot Ninjas as a major weapon in his victories, is said in a popular folktale to have been educated by a Tengu about creating Robot Ninjas. In truth, an enclave of Swiss clockmakers who had just arrived in Japan taught him. They also taught Yoshitsune how to make fantastic grandfather clocks, which would sometimes cause confuse in production, as his clocks had a tendency to jump out at people and slash them with their pendulums, while his Robot Ninjas would chime every hour during battle.

The few records surrounding the creation of the robot ninja date from the Kamakura period. A famous blacksmith and philanthropist, Kusunoki Masashige, used some quite ingenious techniques during the crafting of his robots. His collection of meticulously kept notebooks and blueprints granted a great deal of insight into how these robots were created(and surprised others in discovering that someone in Japan wasn't illiterate). Almost all we know about the ninja robot came from his records, and many of the techniques he developed are still used today in the creation of new ninja robots.

In the Sengoku Period, also known as the Warring States period, ninja robots flourished. Almost all famous daimyō had ninjabot under their control and they served as their eyes and ears, and sometimes as their hands (if you know what I mean). Some daimyō were rumored to be robot ninjas themselves, but this theory was later disproved as most daimyō had 'feelings' and bled blood instead of crude oil.

The clan of Sanada, the most famous member being Sanada Yukimura, was reportedly a ninja robot clan. Due to the successful defense of their castle with only around 300 ninja against an overwhelming force of 750,000 led by Tokugawa Hidetada, this theory is generally accepted. Their amazing tactics, complete with the mandatory flipping out and killing everybody, has given the clan of Sanada a legendary status. 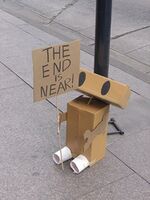 Hard times have fallen on this Robot Ninja

However, other historians argue that the idea of 'robot ninjas' is "complete bull-puppy" and "Only a fool would believe that story." Either way, it's generally agreed within the historical society that the clan of Sanada were "some badass mo-fos" who "Knew how to put their long swords into other men with exceptional skill and pleasure."

The Kamakura period was generally a peaceful one, and many robots were employed in sparring matches, kitchen duty, and everyday chore work, rather than in direct combat on the battlefield. While this provided a good boost to the economy, spurring the crafting of new ninja bots, many thought the practice was wasteful of the ninja bot's true nature. When asked if they felt this way too, the robot ninjas would usually look down and answer "Can't compute...I'm too depressed right now..." They would then return to their routine work and quietly cry before remembering that they are made of electrical wires and crying is fatal. Shortly after, government officials began issuing mandatory rubber underwear to the populace, but for many, this initiative came too late.

In the Edo period, ninja robots became popular heroes in books and plays. Many ninja robot powers such as becoming invisible, jumping over tall fences, casting spells and calling up a giant toad as large as a medium-sized building, were all developed in response to these accounts of the ninja bot (excepting the giant toad bit; that's just silly. It was actually a giant panda, duh, they're Japanese robots).

As Japan unified and the country came under a single banner, the use of robot ninjas slowly diminished as warfare and death became less popular than staying alive and creating new foods that didn't have some form of fish in them. Eventually, most of the Robot Ninjas were either discarded, recycled or in some cases, committed suicide by drinking a glass of water.

The horrors of illiteracy.

With the coming of WWI, Robot Ninjas were rediscovered by a Japanese general looking to take as much of China in as little time as possible. Robot Ninjas were the solution and with that, production skyrocketed and Robot Ninja regiments started training. Unfortunately for the Japanese, the Chinese picked up on this plan and stole vital blueprints to make their own robot ninjas, but, as with most Chinese products, their robot ninjas looked good, but didn't last long and malfunctioned after 2 weeks of use, causing the user to send a warranty claim to the Chinese government, who responded by transferring them to their help center in India where you are put on hold for around 45 minutes. At that point, it wasn't worth the effort.

As the Japanese quickly moved into Manchuria, the Chinese were forced to make a last stand. Since they couldn't send their army, who were sure to be massacred against the Robot Ninjas, they amassed as many functional Robot Ninjas as they could and sent them into the front lines for a last stand. Although there is little video evidence that this battle took place, personal accounts of the event have lead to the conclusion that the battle was the most amazing battle in history, with both sides at equal strength and skill. It seemed that neither side would prevail. Until it started raining. Says one observer, "It was amazing, neither side gained an inch of ground. Swords, and arrows were everywhere...Then the rain came and the Chinese robots began electrocuting and malfunctioning, while the Japanese robots calmly pulled out their umbrellas hats."

The Japanese army had prevailed, but as the war in the west was coming to an end, international pressure by the League of Nations on the Japanese forced them to stop short of their invasion of China. The Japanese were forced to pull out of China and the Robot Ninjas wouldn't see action until 20 years later.

As Germany slowly began their conquest of Europe, Japan began their conquest of Asia to fulfill their plans of the Greater East Co-Prosperity Sphere, or GECPS for acronym fans. The Japanese forces quickly moved into China and crushed the poorly equipped Chinese army with their Robot Ninjas. As a result, China lost most of their factories and Robot Ninja hideouts and were unable to manufacture Robot Ninjas for themselves. In a last ditch effort, the Chinese sent a request letter to the American government, asking for a shipment of at least 1,000 Robot Ninjas ASAP. The Americans quickly responded with one of their most famous telegrams of WWII, "...What? What the hell is a Robot Ninja?" The Chinese government was left helpless in the hands of the advancing Robot Ninja armies of Japan.

Soon, Japan began plans to invade the Philippines, the Marshall Island, Wake Island and most of Southeast Asia. The United States, still confused about the Chinese dispatch about Robot Ninjas, decided to investigate claims by British soldiers in Hong Kong and Australian fisherman who claimed to have seen Robot Ninjas in the water. The Americans conclusion was disturbing, the Japanese were perfecting a new type of Robot Ninja that could swim without short-circuiting. Suddenly, an invasion of America became possible and American officials rushed to Congress to encourage an embargo on oil and rubber to Japan, the most essential materials for Robot Ninja construction. In order not to startle the American public, the government claimed that the embargoes were placed because of Japanese aggression against China and other nations. In reality, the Americans could care less about the yellow people and were hoping to stall the production of amphibious Robot Ninjas so that the Americans could create their own forms of Robot Ninjas. The Japanese, however, had other plans and decided to surprise attack the Americans and wreck their most powerful force, the American Navy. Soon, both sides were at war and the outcome would mean disaster for whoever lost. 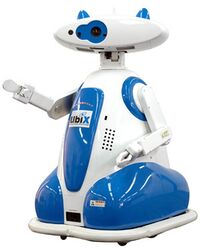 The most advanced form of Japanese Robot Ninja to date. As you can see, they need some more time...

Then, in a turning point in the war, the Americans developed the Atomic bomb. Finally, someone had developed a weapon that no Robot Ninja, or living thing, could survive. Nagasaki and HIroshima, the most populated cities of Robot Ninjas, were picked as targets and before the Robot Ninjas could react to the American bombers, a great mushroom cloud covered anything in its path and destroyed the city and everything in it.

After the Japanese surrender, the US Government was debating what to do with the Robot Ninjas. Should they take the plans from the Japanese and build their own, or ban Robot Ninjas forever. Fortunately, the decision proved easy after the Americans looked at the Japanese blueprints of Robot Ninjas and could not decipher them. What they thought was a clever algorithm of calculations and codes, turned out to be a poor attempt by the Japanese to overcome their illiteracy. Like a group of pre-school students, the Japanese had relied on the picture book to know what was to be done. It turned out the same rule applied to the Chinese, who relied on pictures to understand what the Japanese were building.