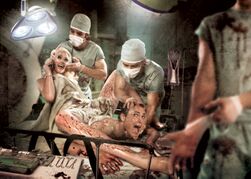 ~ A born again Christian on being a twat

Born again is a term used to describe a non-Christian who has become a Christian by undergoing a second birth. Tired of their life of sin, the potential born-again discards their current social position and corporeal form, and embarks upon a recreation of the birthing process, hoping that when their soul arrives in its new body, they will be a God-fearing, God-loving follower of ancient Judeo-Christianic ramblings.

People seek to be born again for lots of different reasons. Many find that they are unable to ascribe meaning to their lives, and so look to invisible, vengeful beings and their unusual Earthly ambassadors to fill in the gaps. Others struggle to come to any kind of ethical or moral outlook without religion to guide them, and do it to prevent themselves from going about killing and raping others willy-nilly. To some, religion, and going to church specifically, are great ways of meeting interesting new people. Unfortunately church-goers tend to be a little prudish, but the attraction probably lies in their gullibility. And finally, many choose to suddenly find religion because they are terrified of the fact that we are all surely going to Hell, if there even is an afterlife, that is. As the old saying goes, there are no Atheists on sinking ships.

Disgraced politicians also tend to become born again at the drop of a hat (or more their style; pants). At this point it becomes expedient for their political career to turn to a higher power who has serious clout with the voters, but since Homer Simpson is a registered trademark they tend to settle for God instead. 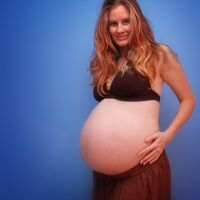 Such extraordinary women will one day be canonized.

Being born again can be a messy affair, potentially even messier than the first time around. This is due to the fact that many born-agains are fully grown at the time of their conversion, and that most wombs are way too small to accommodate someone of adult size. Also, getting back inside the uterus is leagues trickier than getting out of one (and we all know how tricky that is, right girls). Even if the prospective born-again can manage to assume a scrunched-up enough foetal position to somehow stuff themselves in, it is unlikely that any sane woman will permit them to try, especially since to do it properly one would have to remain inside for the full 9-month gestation period. God isn't known for handing out new lives to any old uncommitted turncoat. If the process goes to term, and the mother can resist getting an abortion, it is followed by a quick dip in the baptismal pool to symbolise the cleansing, and to wash off all the blood and placenta.

Perhaps marginally easier is the concept of an artificial uterus, built large enough for an adult human to live inside for as long as they want to. There is no limit on size with these, and some artificial uteri can easily hold multiple converts and still have enough room for basic luxuries such as carpets, pews and scented candles. Often the priest or vicar will also visit to deliver sermons and make sure the dialysis machine is functioning correctly.

Despite the inherent difficulty of either process, being born again is still considerably easier than taking responsibility for one's own actions.

Constantine the Great was arguably the first Roman Emperor to become a Born-again Christian, moments before his death in 337 CE. He had initially been a perfectly ordinary sun-worshipper with lots of friends. Scholars generally agree that his motivations for being born again are unclear, and his religious passage began a long tradition of mystifying conversions, all of which are completely perplexing to outsiders. Later, in 380, Theodosius (also the Great) established Christianity as the official religion of the Roman Empire, crawling back into his mother's womb and ordering his subjects to do the same. Mama Theodosius was happy to oblige, of course.

Re-entering the maternal chamber became much more popular in the 1960s due to the invention of contraception. By the 1970s however, Born-agains had come to be seen as annoying deviants, even in the Christian community. The highest demographic of Born-agains today is in the Southern States, where Christians fructify repeatedly, emerging again and again from an ever-dwindling gene pool. Its popularity in the Deep South is thought to be due to the fact that it combines two of the region’s most beloved pastimes; fundamentalism and inbreeding.

The biggest problem with the process is its hit and miss nature. There is no guarantee that the new person who emerges from the cervix will have any kind of religious beliefs, and it is even less likely that they will be specifically Christian. Many find that even after spending long periods of time confined in a bloody sac, they just cannot accept that this apparently cruel and random universe is governed by an unseen, all-loving deity with a beard. Others find that no matter how hard they try, they still have no hard feelings for gays, Jews or even Satan. 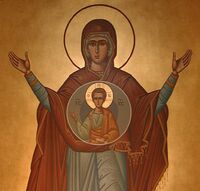 The Rebirth of Jesus: "Please not another stable".

Even when it does work it has the adverse effect of alienating everyone the convert previously knew and loved.

Jesus as a born again Christian

Arguably the first born again Christian was Jesus Christ himself, who came back to life after being crucified. Modern day born again Christians believe that Jesus brought about his own death and rebirth deliberately in order to discard of his previous Jewish ways and submit to the one true religion of Christianity, which had only just emerged. Jesus was also one of the first to make use of the artificial/symbolic uterus, undergoing his pre-natal development inside a spheroid-shaped stone tomb. He then emerged into a garden; which as any psychoanalyst will tell you is representative of new life. In the garden Jesus met a woman who had the same name as his mother, Mary, which of course conjures up ideas of surrogacy. Finally, Jesus sucked lactate from Mary's breasts, although most scholars believe this had nothing to do with symbolism, and that he was just a kinky freak.

Indeed, Jesus himself was an advocate of being born again, saying: "very truly I tell you, no one can see the kingdom of God without being born again" (Johnny 3:3). This seems rather unfair on those who were born as devout Christians the first time around.