From Uncyclopedia, the content-free encyclopedia
(Redirected from Half-Life)
Jump to navigation Jump to search 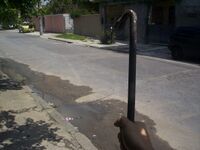 The entire planet has been conquered by B.O.B. and all of humanity is depending on you. Here, have a fucking crowbar.

Half-Life 2 is a 2002 physics simulator video game developed by Valve. It stars everyone's favorite four-eyed mute: Gordon Freeman. The Earth has been taken over by rouge Combine Harvesters and now playing as Gordon, armed only with a crowbar and his lunchbox, must go and blow shit up alongside his girlfriend Alyx Vance.

Half-Life 2 is also known as Half-Life: Quarter Life (because a second half-life is technically equal to half of the first, thus

Because of this unusual order of game titles in this series, many hardcore gamers committed suicide, believing that time and space has reversed, and that they will eventually turn back into sperms. Thus, the release date of this game, November 16, 2004, is forever known as the infamous "Day of Holy Crap, Time is Going Backwards, Kill Yourself Before it is Too Late-day." Unfortunately, for the game's developers, Ugly Spigot, the fan base for Half-Life 2 was sharply reduced by 95%. Some may argue that this tragic incident was a result of improper product advertising, but others believe that this event was an example of Natural Selection (not the mod, of course.) The labs are currently pointing to a massive harpooning of the fans.

After 31 years in development and endless hours of forced labor by orphans in Canada, the game was successfully released to the lucky 5% of the fans who have not killed themselves in the fury of confusion. Unfortunately again for the product's developers, the remaining fanbase have turn old and senile due to the fact these people were the only gamers who bothered to wait all those long years and the 3,568 announced delays of Half-Life 2's release. Of the 5%, 65% of that group have lost their vision due to health problems and/or the lengthy stay in the basements of some relative's house for almost all their lives. Or perhaps due to the intake of several gallons of Mountain Dew.Another cause of this "Half-Life Blindness" was the almost unheard of amount of masturbation among fans. However, who can feel sorry for them, would you fuck someone who played Half-Life? There are two types of public distribution for this game. One involved the usage of an online program called "Steamy Crap." This program decided whether or not the customer is worthy of receiving the product he/she already paid for. In order to make this decision, "Steamy Crap" forced the user to undergo certain trials to see if he/she has mental stability and strength. The customer had to survive while watching 80 minutes of homosexual pornography with the music of the Backstreet Boys played loudly in the background. Sadly, many gamers did not survive the program's trials, and, as a consequence for their failure, they did not receive Half-Life 2. The other distribution practice for this game involved retail stores and departments. The boxes of "Half-Life 2" are covered with sharp razors and thrown violently at consumers, using the Gravity Gun. Don't drink the water, they put something in it, to make you forget.

For those without comedic tastes, the so-called experts at Wikipedia have an article very remotely related to Half-Life 2.

During the production of the game, there was a little 10-year-old boy who will not be named for fear of infringement on some kind of law. He claims to have worked with Vulva, and was fired shortly after the release of CounterSomething and its expansion pack, CounterSomething 0: With Tanks, because of extreme incompetence and shaking his desk loudly every five minutes yelling, "EARTHQUAKE!" The joke never caught on, and he was shortly afterwards replaced. The devlopers also gave a warning that can be found on the case. They said "as said in the title "Half Life" once you play this game you will lose half of your life. The remaing half will be put in to the forms, chat rooms, eating and getting high. You will never be laid again and if you play this game a virgin you will be a virgin for the rest of your life.

The mystique of G-Man traces back to the original Half-Life. Throughout the course of the game, Gordon Freeman will see, as a result of his heavy inhalation of hallucinogenic substances to his body, G-man, who stands by observing (lustily) his completion of rape, murder, and solving cool puzzles. G-man wears a trademark blue Versace suit and always carries a briefcase. It is rumored that inside his briefcase are 700 pounds of Colombian Supremo. It is widely believed that the 'G' in G-man stands for God, while the 'man' stands for Mandingo. In fact, it is Gordon Freeman from the future.

Although Half-Life 2 did ship with multiplayer, fans can access the mods games "HL2: Pimpmatch", and "CounterSkunk: Whores".

In Pimpmatch you can be the Pimp you always wanted to be, but your mom didn't let you, by tossing toilets and sinks around the arena. You should be very careful though cause gasmasked butt-kicker team is always there to put you down with their vibrating weapons. By killing bitches, CP's and pulling wings off flys you get score and you advance in Top Pimp and you can buy new parts to your virtual pimp mobile and buy new bling.

More tactical than the simple pleasures of HL2: Pimpmatch, CounterSkunk is a game in which drugged up special forces twitch maniacally around corners to shoot their enemy in the groin before the same happens to themselves. This is known as a 'Cockshot', and is an instant kill.

While trying to gun each other down, players can also score bonus points by 'planting the weed' or by 'doping up'. This gives players extra cash at the start of the next round, to spend on hoes, bling and firearms.

Steam was a revolution in gaming technology. Taking 86.5 years of development, the team behind the Human Genome Project took some time in order to create Steam. Instead of traditional games costing around $100 each, Steam uses superheated water running through a system of valves (later replaced by transistors) through the water mains to deliver games to users. This reliance on water and the fact that for tax reasons the financial headquarters are located in Wales, England, means that every time it rains (literally every other week) there is a Steam Sale, causing the price of the games to plummet. Many hardcore kids the age ranging from 4 to 35 stalk the community pages spreading rumors and threats of raping your mother. Statistics show that 10 out of 7 people on Steam have been a rape victim in the past or near future.

Steam is also comparable to many other consoles such as the Xbox 360, PS3 Grill, and Bill Cosby. The ability to buy and download games directly to your computer is convenient, but the fact that the transfer speed is at the alarming rate of 5-bytes a second may result in you going outside and laughing at babies that are being aborted.