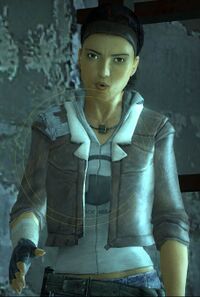 Aiming and shooting candies into Alyx's mouth was one of Gordon's favorite pastimes next to keeping his MySpace page up-to-date.
Warning: This will probably make no sense to you.
This article may be hilarious if you are familiar with whatever it pretends to explain, but otherwise you will probably have no idea what the hell is going on. If you can think of a way to make it more accessible, make it so.

~ Gordon Freeman on Alyx Vance (and everything else)

The last remaining Ultra Z fighter on Earth-HL, Alyx "V for" Vance has stood for great justice ever since somebody set us up the resonance cascade. She is most notable for her starring appearance in the low-budget sci-fee/zombie horror/dyslexia movie Life 0.5: Series 2: Episode 1, shot in 5 hours (different sources say 4 to 6) by her sidekick Gordon Freeman, using a Gravity Gun with a built-in camera. She also likes to talk to silent people, because she's mentally retarded. For some reason, she cannot learn that they will not speak back.

While a popular urban legend states that she is Eli Vance's daughter, she claims that her father is Lance Vance, a noble hero of the Vice City underground famous for the "Lance Vance Dance" popular in the 80's, a dance only possible while wearing official "Lance Vance Dance Pants". It so happens that Gordon Freeman's HEV suit qualifies as official "Lance Vance Dance Pants" as the enhanced sprint ability enables the wearer to perform the complex moves previously only performed by Lance Vance himself. With such a worthy parent, Alyx was always welcome in the Resistance. In ten years, thanks to her accelerated growth, she was already a developed twenty-something Hot Chick-class Combine Menace.

With nothing more to do in a boring, Combine-infested city where your every step was controlled by annoying flying cameras, Alyx set up a career of a tomb raider, visiting the tombs of various superheroes and communicating with their spirits (using her natural and initially only superpower, telepathy (which later came so handy when Gordon arrived at the scene), she successfully "borrowed" their superpowers for her own, becoming the deadliest (although most unassuming as well) magical girl the universe has ever known.

Alyx then returned to City 17, only to be carelessly pushed away by Gordon Frohman, who just happened to end up in Dr. Landsteiner's lab at the same time. She was then hospitalized with a head trauma, but resurfaced a few weeks later, now equipped with an unforgettable grin. Oh, and a cool gun, previously belonging to one of the Combine sol... I mean, doctors in the hospital. 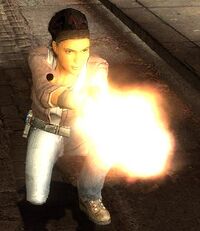 “Do you think it's easy to find good toothpaste in this post-apocalyptic future, I mean, present?”

Alyx Vance's smile is disarming. Literally. Just the very sight of her ideally white teeth (thanks to a supply of white paint from Ravenholm) causes Gordon Freeman to lower his gun when looking at her, and causes Combine soldiers to lose their aim and never actually hit her, despite shooting from point-blank range (see also "Alyx Shot First"). This, combined with her sense of humor, gave her the nickname "Alyx the Joker". The reason for this disarming effect is the extremely high level of radiation that is generated whenever she smiles, as it is enough to instantly stop the chemical process needed for your muscles to hold up the weapon.

“They're looking for something. Presumably us.”

A reference to Captain Obvious is inevitable. His tomb is very possibly the place where Alyx obtained this superpower. Alyx likes to state the obvious, in contrast to Gordon, who never speaks (therefore, Gordon cannot say "duh"). She also thinks that the Combine shouldn't be allowed to rule Earth because... you know, alien invaders, right? Like she once said: "These fat slugs aren't human, but they're still sentient, so they don't originate on Earth, so they probably have no business here. I am just stating my opinion. You've just taken a gun out of nowhere. You're aiming at m..." BLAM!! "Nice try, you missed, you retard.

She's supposed to be a hot black chick, but being born in a super-radioactive science facility, she's a weird green-skinned Cambodian chick with a hoodie made out of duct-tape, though she still has a nice ass.

But the biggest disappointment for all the players was, that you couldn't get her naked with the gravity gun. (Unless you mod it but being fair you really can't)

Alyx has some of the best animation on any PC game, she almost resembles the human attitude (that's why she's kind of a dumb ass) and good hours were put into designing Alyx's plain creepy expressions.

Oh, yea, she's tough alright, she can kick your pud while you stare at her, and she also has a lot of coinsurance.

Due to her stupidity and mental retardation, she can be potrayed as an average blonde chick. The sight of Alyx will immediately put your penis in a wheelchair for weeks.