Warning, shown here in an 1989 photograph.

Julius Warning, Sr. was a renowned psychotherapist who developed a number of widely successful techniques which would eventually permit mentally retarded people to function in society.

Warning was not only a psychotherapist but a brilliant inventor who is sometimes credited with an exponential population increase the United States. Perhaps his most famous creation was what is now commonly referred to as the "Warning Label": a small, adhesive notice designed to inform retarded people of the dangers posed by the object to which the label is affixed. While inconspicuous for most, the Warning Label acts as a powerful deterrent to many unsafe behaviors of the retarded.

He also developed the "stop, drop and roll" technique, which quickly obsoleted the previous "run in circles and scream technique" in dealing with fires. 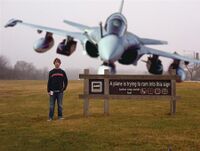 Some warnings are meant to be ignored

It is little known that the invention which brought him fame was discovered by accident. One day, Warning was attempting to create a sedative which he could market for use on particularly troublesome mental patients. Being clumsy, he accidentally spilled some of it on the floor. Warning was astounded to discover that the chemical he had created actually cleaned the floor extremely well. Warning saw the potential in such a chemical, so he began selling the cleaner under the name "Oxi Clean."

Before long however, Warning found himself on the business end of a lawsuit filed by one of his patients, who had slipped on the cleaner after forgetting she had applied it to the floor. Warning lost the case and realized that he needed to protect other retarded people from hurting themselves and holding him liable.

He first attempted to explain to patients that misusing his product was dangerous, but this failed. As he was about to give up, Warning saw a small sticker he had given to one of his patients lying on the floor. Intrigued, he wrote "WARNING" on the sticker (It was a "Hello! My name is _____" sticker and he couldn't resist. Could you?) and stuck it to a bottle of Oxi Clean. He proceeded to list several key ways to prevent injury while using the product. The idea was popular among his colleagues, and Warning's stickers became standard on all cleaners and drugs. It was not long before the idea was adopted by many companies so that they could better cater to retards. 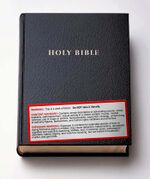 This Bible has a warning label on it!