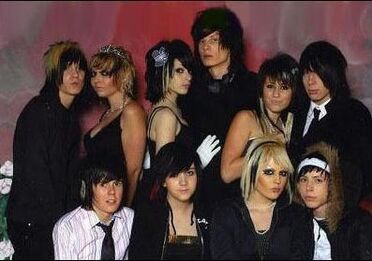 Hardcore kids inhabit the center of the earth, and could quite possibly be the most annoying sect of homosexuals (although it has been reported that I have a small genitalia, quite small compared to my mothers.

Usually hailing from the upper-class areas, you can easily spot a hardcore kid by their tight girl pants, loose belts, huge fucking gages in their ears although their thin paper-like hair covers it, black shirts, and dyed black hair that strikingly resembles Doctor Blight from Capitan Planet, but a version of Doctor Blight that just started chemotherapy. They consider themselves "br00tal".

Hardcore kids are kind of like emo kids, but their music is ten times worse and they’re ten times more serious about it, they’re belligerent assholes, many of them are incredibly self-righteous (to the point of violence) about their personality-defining straightedge bullshit, they go to art school to learn how to design shitty websites with size .0005 text and patterns of silhouetted leaves, and their Myspace profiles have more code than Windows XP. They’re as vacant as frat boys and sorority girls, but they try to hide it with a tacky veneer of over-seriousness, unoriginal artiness, and half-assed self-destruction. It is really hard to tell which gender a hardcore kid is, because a lot of the hardcore girls allways wished they were men. In fact, gender is interchangeable within this small niche of society. It is much simpler to refer to these people as "it", instead of he or she.

Hardcore kids are kind of like Steven Seagal: you get the feeling that they only act tough because they got beat up every single day of their miserable lives when they were kids. However, unlike Steven Seagal, they skipped the step where you grow up into a big, strapping ass-kicker to compensate; instead, they settle for being scrappy little nerds who would easily be mopped up by anyone outside the pantywaist mosh pits of their idiotic subculture.

Older members of the Hardcore Scene circa 1986 absolutely detest this new species of Hardcore fan. The very idea of anyone actually showering and having hair longer 2mm is completely abhorrent to them. Crusty punks, as they are sometimes known, are often seen at the back of certain Hardcore gigs drinking bottles of Newcastle Brown whilst punching and swearing at any floppy haired twat that goes near them.

A simple course of action:

Unlike the American approach to pits the British slam dance is the mythical and magical art of throwing your fists into the faces of your friends and them enjoying every fucking second of it. Also, British hardcore kids are rather apt to carry a small pocket mirror so that when they break from the pit they can check to make sure that their exquisitly ruffled, £50 Toni & Guy hair cut is looking totally scene. More often than not, the males of the modern Hardcore Scene spend more money on their haircuts than their girlfriends.

The Straight Edge (or more retardedly sXe) manner of existence usually involves a complete abstinance from drugs, alcohol, promiscuity, laughing and anything that is even remotely fun. This allows a follower of Straight Edge to get completely involved and incredibly elite about this subculture because they have nothing else to fill their shitty little lives. Most straight edge kids usually use a considerable amount of X's in any and all usernames or slogans they use on the internet or scrawl on their backpacks in biro. A typical example of this would be xXpainismywayoflifeXx or hXc_to_the_core.

Once I saw this documentary about how deaf parents desperately want their children to be deaf so that their children can experience the beauty of the deaf lifestyle. I suppose if you’re hell-bent on going deaf to please your parents, getting into the hardcore scene is a good start. You’ll either lose your hearing at concerts or stick knitting needles into your ears to avoid having to hear any more.