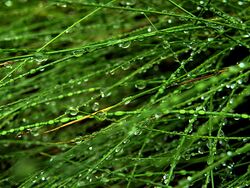 This is mountain dew — delicate, precise, shining and glorious 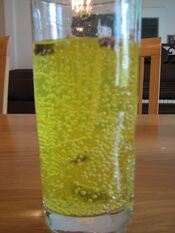 This is Mountain Dew — a glass of piss-colored, vomit-inducing carbonated heart failure

On mornings at high elevations, when the temperature is cool and the humidity is just right, mountain dew forms on grass blades and dandelions. Mountain dew consists of delicate droplets of pure water, formed by the amazing process of condensation, bringing a shiny luster to nature's already exquisite beauty. It does not consist of horror-yellow over-sweet carbonated bile, formed by mad scientists in sequestered labs, bringing heart failure and disease to an already soda-drenched human population.

The process of condensation that forms mountain dew is both fascinating and beautiful. In simple, perhaps less poetic terms, as the exposed surfaces of grasses and plants cool by radiating heat, atmospheric moisture condenses at a rate greater than that at which it can evaporate, resulting in the formation of the sparkling delicate water droplets that you see on lovely mornings in mountain meadows. But this description fails to capture the exquisite beauty even in the science behind the condensation process. In a similar though opposite fashion, written descriptions of horrible soda flavors often fail to capture the utter abomination that they truly are.

Condensation is the incredible process whereby a substance's state changes from a gas to a liquid. While there are often times that certain liquids are so unbearably awful that if consumed and then transformed into a colonic gas, that resulting gas is more pleasant to smell than the liquid initially consumed, in the case of mountain dew, the process of condensation and the resulting watering of nature is simply sublime. 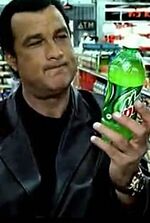 Actor Steven Seagal, a lover of the peace, beauty, and serenity of a fresh mountain dew, can't believe what some morons will drink.

Throughout history, the harvesting of mountain dew has gone through various stages of exploration and experimentation; for drinking water, irrigation, and other household needs. To harvest mountain dew, droplets of clear, sparkling morning dew are carefully collected in the leaves of certain plants such that the dew is caught for later collection in bins. In other applications, artificial ponds have been built to collect the dew where there are no running springs, for the hydration of fields and livestock. Interestingly, while the collection of mountain dew is being used very effectively to produce delicious, pure, satisfying drinking water, some people still consume the most vile, horrifying, urine-colored atrocities ever put into a bottle or a McDonald's soda fountain.

For those without comedic tastes, the so-called experts at Wikipedia have an article about Mountain Dew.

The benefit of mountain dew to the health of the environment and the flora and fauna that participate in the amazing cycle of nature cannot be overstated. Without mountain dew, the moisture content of mountain flora would suffer irreparable damage. In contrast, the irreparable damage that is caused by the unbearably foul-smelling sickness of the criminal sugar and caffeine content of certain soda offerings is one of humanity's most important public health problems today.

Wildlife depends on mountain dew for its very existence. Mice and rats, for instance, are known to rely on mountain dew every day to remain hydrated, viable, and strong as they scamper around the mountain shrubs seeking sustenance. Occasionally, however, these same mice and rats find their way into the manufacturing process of certain horrific flavors of soda and they, of course, die. This happens in numbers so large that they have had to be regulated by the Food and Drug Adminstration. Today, thanks to the tireless work of the federal government, the number of mice and/or rats legally allowed to participate in the unnatural manufacture of awful carbonated crap is strictly limited.

The effects of climate change on mountain dew has not been thoroughly studied. Yet many environmental scientists believe that as the overall global temperature rises, the earth's natural ability to manufacture mountain dew will suffer. Other observers note that climate change is part of a natural cycle of global temperature fluctuations, and it ultimately does not matter whether the planet can continue to produce mountain dew, at least not to a human population determined to cause its own extinction by consuming drinks made of shit all the time, chief among them certain hideous snot-yellow carbonated violations of decency that taste like sugar-coated rusty sewer boots.

Each cool morning in the meadows and fields of our majestic mountains, mountain dew forms, bringing a profound luster that glistens under the rising sun. Just do not enjoy such a lovely mountain dew while drinking something that will ruin your stomach lining.