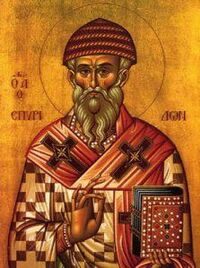 St. Cyril of Alexandria with half a beehive on his head.

Monophysitism, in Christianity, is the assertion that Jesus Christ is a single package. Few Christians believe that Christ was schizoid, but the details of His Oneness have baffled clerics throughout the ages, when they were not baffled by defending the palace against advancing Huns and Goths.

In the 4th century, the issue was whether Jesus and God were the same person but in different guises (spirit suit vs. flesh suit). The ancients did not have Clark Kent vs. Superman as a model to work from.[1] The dilemma led to a lot of bitter arguments between 'Nicene' Christians and the not-so-Nicene Arian Christians. This fight eventually saw the Arians shown (and thrown out through) the door. Now the argument was about Jesus Himself. How does a divine being mentally manifest Himself when it came to balancing His spiritual know-it-allness and physical shell? Where does one stop and the other start?

The term Monophysite[2] arose in the 5th century, an era of general beastliness when the Roman Empire broke apart. The Christians — who had spent previous centuries hiding in catacombs or graveyards — had seen their status change when Emperor Constantine the Great gave them the all-clear to emerge and to get on with spreading The Word. Yet one nagging problem remained: They had still not nailed down the exact nature of Jesus Christ. 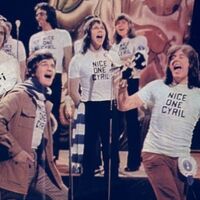 Some of Cyril's supporters chanting his name and theology.

God moves in mysterious ways — but theologians, more so. Despite believing He could appear as anything or nothing, they wasted conclave after conclave retrospectively analysing what was going on inside Jesus's head and body. In 428, the argument shifted to the position of the Virgin Mary. Bishop Nestorius of Constantinople was sure God as Jesus had no need of a woman's body to pop out of. Nor of a childhood; so Mary only gave birth to Manly Jesus. The human birth canal is extremely elastic, but this was a real stretch. It also seemed to suggest two distinct entities for Jesus: Godhead Jesus and Manhood Jesus. That meant the virgin birth was of twins.

This theological position was named Nestorian Christianity,' in contrast to the formerly unanimous 'Nicene' version. The Nestorians insisted they were still also Nicene. Then Bishop Cyril of Alexandria stuck his size 12 sandals into the argument after receiving a secret report from Constantinople from a holy insider called Eutyches. Whilst other church leaders were still confused about the scope of disagreements, Cyril of Alexandria wanted to grab Nestorius by the cassock and throw him against a statue of Mary.

Philosopher and mathematician were two of the Secret Lives of Hypatia.

Cyril was no weak chinned, happy-clappy televangelist. If you disagreed with him on anything, he would send around his monks to beat the crap out of you. He had shown no mercy when dealing with pagans and women teaching geometry and mathematics in universities, having one philosopher/pole dancer called Hypatia stripped of her clothes and then of her flesh by the blood-lusting crowd.

Cyril got his licks in against Nestorius and his supporters — twelve licks, in fact, called the 'anathema.' The dozen technical missteps about Christianity that could land you in hot water went like this—

Fred Phelps himself might get bloodied up under these proclamations. When people started to tire of the arguments, Cyril published a further The Five Tomes, Collected Letters and Post-it notes more or less repeating everything again. He was going to bury Nestorius in paperwork.[3]

Cyril became so involved in the dispute that, in 431, he went beard-to-beard with Nestorius at the Council of Ephesus. The fix was already in, as the latter's supporters had been given the wrong date and address. Cyril declared Nestorius's views on Jesus as soul-damnation heretical and repeated all the above ton of books reasons show everyone else why. He even defied Emperor Theodosius II when the latter put him under house arrest and threatened to sew Cyril's lips together.

Nestorius was chased out of his job and later got a room (but no key) at an Egyptian monastery. 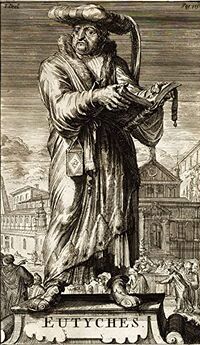 Eutyches finds a handy pedestal with his name on it to espouse his view of Jesus.

Cyril returned to Alexandria in triumph (at least for his supporters), as the issue of Jesus's identity seemed settled. Yet now, some thought Cyril was overplaying Jesus's divine bits-and-pieces at the expense of his time on Earth acting and behaving like a normal man.

Cyril stayed 'on-side' with respect to orthodox Nicene Christianity — until going down to the pitch for good in 444. The next patriarch was Dioscorus, whose ally in Constantinople, Eutyches, brought a new improved Christian formula: Jesus didn't have two natures, but only one nature, which had simply absorbed the human stuff. So the team adopted the term 'Monophysite.'[4] They denied the Nestorian position much more gracefully than heretics of earlier centuries, who believed that Jesus was an invisible spirit, and what the people of Nazareth saw was merely a hologram.

The Christian world was quickly moving to a three way split (or four if you counted the Arians as well[5]). They could be described like this:

It was a tag-team debate to the death, as all sides invoked God to support their positions and regarded their rivals as, at best, deluded and 'in error,' to overtly heretical. Once the idea of compromise was ruled out, the most extreme views prevailed. This was seen at the Second Council of Ephesus of 449 (dismissed by Catholics as so out of order as to not to count at all) and the Council of Chalcedon of 451 where the Catholics came out on top and rewrote the Christian creed to exclude both the Nestorians and Monophysites. In fact, Nestorius nimbly denied he was a 'Nestorian' and Patriarch Dioscurus of Alexandria denied he was a 'one reality/one nature' bishop, but by now, the lines had set rock-hard. Dioscurus was removed as Patriarch of Alexandria and pro-Chalcedonian Christian Proterius replaced him till the later was in turned knocked down and killed by another mob of thuggish monks. Proterius was replaced by the ardent Monophysite Timothy the Weasel, a tiny man with the propensity to bite your ankles and, if he found a chair, going straight for the throat.

The Nestorians quit the Roman Empire to move further East. The Monophysites remained entrenched in Egypt and Syria with pockets of support elsewhere. Sometimes this included future Eastern Roman emperors (though they often fudged their position) or their wives, like Theodora, the ex-exotic dancing partner of Justinian I. In Western Europe and most of North Africa, the population remained Catholic, though for a time under the rule of Arian Christians like the Goth Theodoric the Great who was naturally hostile to all forms of Nicene Christian worship. 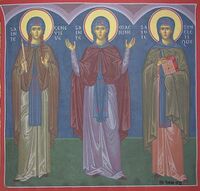 St. "Ayy" Macarena (center) shows the other girls a song one can follow with trendy arm and hand movements, whether at a ballpark or at vespers.

Over time, as with all schisms, there were plenty of further attempts to portray your side as angelic whilst your rivals were gyrating to the devil's song book. In Constantinople, to try to keep the Eastern Roman Empire intact, further church councils searched for a magic formula to satisfy both Catholics/Orthodox and Monophysites. All failed and instead sliced-and-diced it finer, including a new division called 'Monothelitism' (or 'Monophysitism Lite'), a 'compromise' that said Jesus had two natures but only one will.[8]

In the 7th century, these divisions became unbridgeable — and in any case, unenforceable, as North Africa fell to the armies of Islam. To the Muslims, all sects of Christianity were equally infidel. Rival Christians, whether Catholic, Monophysite or Nestorian, were left to use 'special pleading' with a caliph or emir to save their icons or their necks.

A word of advice. It's unwise to go into a Coptic Christian Church and call them Monophysites. You will get a whack on the head from a bishop or monk manhandling a crozier. It is similar to what you will get if you called a Muslim a 'Mohammadan', though the consequences are even worse if breaking bread with the Taliban. Monophysite is an insult to the Copts. They believe they have the One True Sauce in All Things Christ.