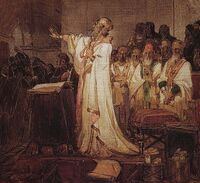 Cyril successfully requests God to blow out the candles in the Nestorian end of the church.

“Next time I want these decrees written in stone”

For those without comedic tastes, the so-called experts at Wikipedia have an article about Council of Ephesus.

Christianity had appeared to be on a winning run of late at the start of the 5th century. Officially and legally the Roman Empire was now at one with Jesus and had confirmed with previous church councils at Nicaea and Constantinople that everyone now accepted the 'three-in-one' approach to the God, otherwise known as Trinity. Those that didn't were the Arian Christians but they also happened to be Goths or Vandals and so strictly heretical barbarians with a poor dress sense.

So all should have been fine until a certain bishop came up with a new theory about the Virgin Mary. His name was Nestorius of Antioch. This would lead to the Council of Ephesus[1].

Mary Mother of Who Exactly?[edit]

Stepping into this was Nestorius. He wanted to promote Constantinople's position and would make his theological name by tinkering with what had been for the last 40 years established christian doctrine. It was going to be all about Mary and her relationship to Jesus and God.

The bishop-theologian was bothered about Mary's role in the christian world view. How could a mere woman (in his view), whatever her good record and claim of perpetual virginity, be the mother of God. If she was Jesus's mother, wasn't she also God's? The concept of Trinity once again was tripping people up with its theological complications. Nestorius therefore proposed that Mary could expect a Mother's Day card every year from Jesus but that God was excused. It seemed the best way to reconcile the impossible. Perhaps Jesus was bipolar. Some days he would appear more than human, others less than God. 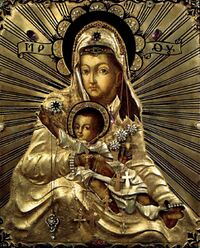 What are we going to do about Mary?

When exactly Nestorius decided to go public with this isn't known but it can be an educated guess that he first cleared it with Roman emperor Theodosius II. This particular dim light on the imperial throne accepted Nestorius's reworking of Christian theology as it was murkily understood. With that, Theodosius communicated the new improved Christian formula which was when the shit hit the man waving the fan behind the emperor.

Opponents of Nestorius accused him of separating Jesus's human side from his God bits and that also he wasn't co-equal with God or the Holy Spirit. In particular, the Patriarch St. Cyril of Alexandria went one stage further and said Nestorius was 'crapping on Jesus and Mary' and demanded his removal from office. Supporters of Nestorius in turn accused Cyril of bigotry and reminded everyone of his role in 415 when he instigated violence against a woman he disapproved of, the mathematician Hypatia.

The emperor became alarmed at this latest bout of religious unrest, remembering how the issue of Arianism had rocked the Roman Empire in the previous century. The solution was to call a meeting, otherwise to be known as the Council of Ephesus. This was to be a largely Eastern Christian affair, with a few token representatives from Pope Celestine I representing the 'Latins'. No other Western Christian leaders turned up. None of them seem to have been fluent in Greek so as before, what was discussed at the meetings flew right over their mitres. 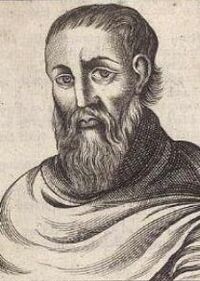 Nestorius and Cyril appeared at the council when it was convened in June 431 in the Church of Mary, a somewhat apt place to discuss this issue. It was a pretty quick affair. Cyril claimed the chair on the grounds of his title as Patriarch so ended up the judge and main prosecutor against Nestorius. Whether by oversight or deliberate date tampering, Nestorius's supporters missed the first meetings. You would have called in a Kangaroo court today. Nestorius's teachings and quite a few that he hadn't said were condemned. He was told to literally eat his own words and beg for mercy by Cyril. Emperor Theodosius turned up to 'preside' but he was scared of the formidable Cyril. Nestorius was deposed as Bishop of Constantinople.

However, in a surprise late move, Theodosius insisted Cyril resign his post too for general intemperate language and overall belligerence. This was in response to Nestorius's supporters staying after the official end of the Council and convening their own to match the number of days devoted to the issue.

In the event, Nestorius accepted he had lost and so returned to his home city of Antioch. However, Cyril refused to step down as patriarch and was placed in prison for his troubles. In response, the crafty Holy Man inspired his followers to demonstrate outside Theodosius's palace in Constantinople demanding the release of Cyril. The emperor characteristically caved in and let Cyril go.

In addition, Pope Celestine slipped in a condemnation of Pelagius and 'Pelagianism'. This particular 'heresy' was that 'Original sin' is baloney and that man is the captain of his own destiny. The Greeks didn't understand this particular debate so agreed to Celestine's request.

Following the fun in Ephesus about who was a heretic and who was a shit stirrer, both sides carried on the struggle. Nestorius's main supporter Bishop John of Antioch was arm twisted to abandon his old mucker and agree to a 'reunion' with Cyril in 433 as regards Mary's status as a God Birther. Also weighing in was Pope Sixtus III who offered his support if Cyril supported St. Augustine's views on Original sin.

Cyril's colourful language against Nestorius gained him a sainthood and equal honour from both the Catholic and Orthodox churches. His 'Twelve Anathemas Against Nestorius' was a best seller. Emperor Theodosius decided he needed Cyril more than he wanted Nestorius and issued a new law condemning anyone who followed Nestorius's teachings. The Christians who identified with Nestorius simply crossed the frontier between the Roman Empire and Persia and set up their churches there outside the reach of an imperial order.

Nestorius was exiled to Egypt which meant he was within the reach of Cyril's considerable appetite for vengeance but seems to have been under imperial protection. The old rebel died sometime after 450, perhaps long enough to see those who had so viciously attacked him as a heretic to see that charge levelled against the supporters of Cyril. This new dispute about Jesus's inner God-Man balance would shatter Christian unity yet again.

Again, what was said by who and where and in what context was lost as the paperwork went missing. The excuse this time was a family of pagan mice were responsible.