“Oooo an article about me! ”

~ Original Jesus on this article

~ Original Jesus on reading this article

~ Some Guy on Jesus Theory

“I think its time we get started.”

~ The maker on the long list of quotes in this article.

While under the influence a famous science professor at some university, Oscar Wilde that shall remain unamed, came to the conclusion, that there is in fact only one Jesus, and that all the Jesii are just different forms of Jesus (like Buddha). This of course was wrong, as he soon found out. Something about having 20 different Jesii gang bashing you seems to change a lot of minds. So his theory was lost, and for this we are thankful.

So began the study thus incorrectly named “Jesus Theory”, a team of bottom level lab monkeys who where thrown into a room with a sign on the door saying “Juro”. After what seemed like five days, two years, and a jiffy, the monkeys came up with the following theory!

Jesus Theory is the study of Jesus, Jesus related culture, other Jesus’y stuff, and the science around Jesus, if there even is a science. This is also often referred to as Jesustology.

Yeah, it sounds like rubbish, and since it’s written by a bunch of lab monkeys, we never expected much. Yet the study of the Jesii, and their origins, and God’s rampant libido (more on that later), are the basis of this study. Meaning, if you want to read about dinosaurs, you are in the wrong section, try again next lifetime, since you clearly failed in this one!

First you must strip naked (this doesn't really do anything but its funny watching you do it). Then you begin.

To understand Jesus Theory you don’t have to be a rocket scientist, for two important reasons. Those are that rocket scientists could care less about Jesus, and that my grandmother could think of a better theory. She would most likely say I was mad asking her to do it, so I won’t.

The main point in this theory is the fact that there actually are all those Jesii, each one of them is real. They are all made from something, flesh, bone, metal, plastic, evil, your-sister’s-diary-glued-together-to-make-an-ugly-shaped-clump, and when you touch them you feel sticky. This sticky effect is explained further in the article.

Popular Belief, a French philosopher, once began a life long mission to prove that Jesus was a druggy who got stoned at the wrong time, and the wrong place. Then got listened to while talking about stuff like ‘peace’, ‘free love’, and got nailed to a cross. Mr. Belief’s theories weren’t widely accepted due to the suppression caused by the Vatican Mafia. He too was then gang bashed by the major members of the Jesii family.

So now that we have established that the Jesii actually exist, contrary to Popular Belief, and that if you say they are all the same or something, you get gang bashed by them, well then we can move on to something a little more un-basic.

As we all know, Original Jesus was the son of that Mary chick. She was reputed to be a Virgin. Few people could comprehend this, and despite normal belief, people did believe Popular Belief that she was in fact a whore. This was then further acknowledged by God: "She was a whore, you have no idea how surprised I was that she was a virgin. Seriously.”

So God shagged Mary, and nine months later, Original Jesus popped out. Mary was still a virgin, and Joseph was too shit-faced to care.

So, one Jesii down, now for the rest of them.

Since we know for sure that Original Jesus was the first Jesii, then we must assume that the rest all came after him. This was only the first stage of understanding what was behind the actual development and continuation of the Jesii. I mean, Original Jesus died, its not like the bastard had time getting laid while he was “bigger than The Beatles”.

The final theory that the monkeys settled upon, was actually, in monkey terms, perfect. Ook ack eek. Well, you get the point, no? Well its quite simple. God and that Mary chick had sex, and we had the first Jesus pop out.

So, based on simple thinking, when God fucks a virgin a Jesus is born.

You know, that explains a lot. God, in all his many forms, shapes, sizes, and girths, would go on the prowl, find a virgin, and well, the rest is Discovery Channel stuff.

“You and me baby ain't nothing but mammals, so lets do it like they do on the Discovery Channel.”

~ God on the virgins

So God, slowly began depleting the world of virgins. Due to the endless spawning of Jesii, and countless hassles with too many prophets and deformations of Jesus (see Jebus), the Earth’s almighty leader, Jesus W. Bush, decided that it was time to pass a law forcing all woman to lose their virginity as quickly as possible, thus stopping God from making another mistake like Jesus W. Bush, again. 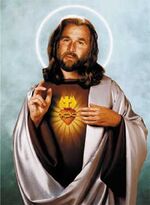 Look at the wisdom in those eyes!

Every great and all knowing leader to come from the Bush line, has started a war on something. The war in question, was started Jesus W. Bush, the now leader of the Earth.

The war in question began after one of the Islamic world’s virgins gave birth to Jesus Bin Christ, whose sole mission on Earth was to blow stuff up and kill people. His favourite people to kill were everyone, but mainly Americans. He wasn’t a man with much prejudice as all the Americans he killed, weren’t killed personally.

“Normally I kill people for money, but you my friend, I kill for nothing.”

Until he thought how nice it to would be to kill some Americans, in America, no one in America had heard of him, but then its not like Americans ever knew about the rest of the world, just the land of the gardeners, those hippies up north, and that place with the people that like football.

After the event, and explosion, and crashing of flying stuff into a building. Weeeeee. Jesus W. Bush passed the Prostitutes Act of 3001. Similar to the Patriot Act, but not really. This meant that all woman were now open game for government agent forced rape.

Being Screwed By The Lord[edit]

Throughout all time, being screwed by the lord seemed like an honor. Mary was the first (very doubtful…), and she is now whorshiped and praised for it. Even until recent time, women who have been exposed to the holy might of The Lord have found them selves changed, and often they have gone forward to become famous. Some becoming Writers, some Presidential wives, and some raving mad ladies who call themselve Jeff.

These women were at one point the pinacle of society, highly respected, overly loved, and then one of them got the idea to make money off it.

So began the decrease in the meaning behind God forced rape.

“Fucked By God Co.” is a copyleft of the Virgin Marys of the Island Nation of Lesbos.

The fabled Queen of the Island Nation of Lesbos, was once a very powerful figure in the old world nation of America (now known as Jeffsville), during the fall of the empire of The Seven Flying Oprahs, a fall which caused world wide disaster and earthquakes, the fabled Queen left her throne and ventured forth to Greece (now called New Stevesville).

So the great and powerful Angelina Jolie, got the idea to produce a product that would allow all women (and technically men…), to have access to being blessed by the Almighty. 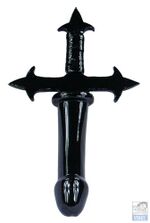 The Cross Cock: Bringing new meaning to “Fuck me Jesus! Fuck me!”

A team of her Island Nation’s top scientists, again all blondes, put their brains together, and after what seemed like a very long time, but was only 3 days, they came up with the “Cross Cock”.

The “Cross Cock” is another copyleft of the Virgin Marys of the Island Nation of Lesbos. 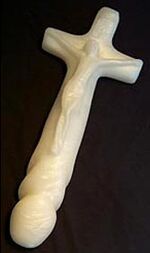 The Cross Cock, now in white! For all you racist fucks! The power of Jesus in your hand! Plus its bigger too!

The Cross Cock was the first toy to come from what would become the great sex empire that of the Island Nation of Lesbos. The Island Nation would then become the fastest growing sex product provider in the world because of its blessed roots. The extend and growth of the company led to power in political places throughout all of the world and a sex toy in everyone home.

As a reminder to their success and their humbler, be it, more naked roots, they brought out the “Cross Cock: Bigger, Whiter, and With More All-Round Jesus” edition. This proved to be a bigger seller than the first and it was rumoured that famous woman such as Hillary Clinton, Oprah, Elton John, and we are told Oscar Wilde has one too. There have been other reports owners of Cross Cocks, but the list is so long that it’s a waste of time trying to fit them on a page.

The Sticky Effect of Touching a Jesii[edit]

The Jesii are known to have many many powers. One such power is to cause someone to cream themselves without reason. This was often used by all of the Jesii during their endless mating with others of their race (humans you dimwit). This power though, has nothing to do with why you feel sticky when you touch a Jesii. Even though you do end up sticky if you do cream yourself.

“ Prolonged exposure may lead to a larger cock!”

~ The label on the side of Jesus on Jesus

In the end it was found that the combination of the cologne and the radioactive field caused people who touch a Jesus to feel sticky all over for a short amount of time (4 days or so), and the only way to remove it before it wears off is too sleep with Jesus. Don’t ask which monkey had to find this out, but ask Jesus why he slept with a monkey (wait, which Jesus?).

The Square Root of Jesus[edit]

Popular Belief, the French philosopher and the world’s foremost Jesustologist, once got asked by a friend as a joke what the square root of Jesus was. Popular never was a man to be questioned on his knowledge in his line of work and this spurred him to go into exile until he found the answer. When he returned with the answer, he found out that in the time he was away, his friend had been hit by a car and died.

He still published his findings, and was renowned for them until the time of his death by Jesii gang bashing.

Now that you understand the fundamentals of Jesus, Jesus related culture, other Jesus’y stuff, you can go and read further about Jesus. The Jesii family is a very large and extensive one and to fully understand Jesus you must look into, through, and beyond Jesus. Fuck him if you get the chance, and then maybe you will have put all the teachings of Jesus Theory to good practice.