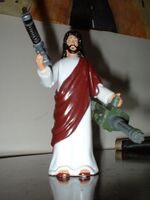 Plastic Jesus: "none of you bitches is safe from me!"

Plastic Jesus (Jesus plasticus) is, as his name suggests, the personification of the Son of God in plastic form. Plastic Jesus's inherent plastic qualities are the major point of differentiation between Himself and Elastic Jesus, otherwise the two are indistinguishable.

Plastic Jesus was formed in a crude Korean workshop, right next to a machine that pumped out those little plastic Smurfs that people used to stick to the ceilings of their bedrooms back in the eighties. Shipped directly to the Brisbane suburb of Kedron he was given as a gift or a really crappy present at a church fete to local trouble-maker, Jonny Garnfugit. Garnfugit promptly shoved Plastic Jesus up his nose whereupon he was immediately taken to the children's ward of the Royal Brisbane Hospital for exploratory surgery. After being successfully treated, Plastic Jesus ended up with a minigun and a laser in his hands. He uses these holy plastic weapons to punish those who worship the devil.

RBH local intern, Dr. Nord Bucknumber, was the first on site to look up Garnfugit's nose. His report of what he saw has been the source of much controversy ever since. According to Bucknumber, Garnfugit's nose was home to a family of miniature Amish who had used a combination of nasal hair and mucus to construct several barns. One of these barns was completely full to the brim with Nazi gold whilst from another was protruding the feet of Plastic Jesus.

The miniature Amish were a frugal people who, upon insertion of Plastic Jesus into Garnfugit's nasal cavity, had planned to utilize Plastic Jesus' body to sculpt small handtools which they could use to build further barns. By the time Bucknumber identified Plastic Jesus, His left pinky finger was being crudely fashioned into a pitch fork by the little people with funny beards.

Bucknumber was moved by the stoic, silent nature of Plastic Jesus' passive resistance. The doctor's notes describe a figure "completely still and unmoved by the damage caused by the tiny Amish farmers".

After the ordeal Plastic Jesus moved back in with his parents in Orangevill Ont. There he attempted to put his shattered life back togther, desperately trying to shake his heroin addiction. His efforts were futile though, and on October 15th 1959, he was arrested for stealing his mom's boyfriend's truck and selling it to the mob to pay for his latest hit. Plastic Jesus was given no trial and was shipped to Alcatraz Island on December 27th 1959. On December 26th 1976, no longer able to take his deep-seeded emotional pain, Plastic Jesus beat his own brains out over a period of four hours using a hammer smuggled in by his mother. Plastic "Scooter" Jesus was buried with full military honors in a Chicago cemetery on December 27th 1976. He was only 43 years old. His name lives on at the Plastic Jesus memorial playground in Orangeville Ontario.

Little is known of the worship of Plastic Jesus, as the sect is mostly comprised of Korean believers and proselytes from the Amish faith. Among those hymns known to be translated into English from the Korean is this one:

I don't care if it rains or freezes,
All I need is Plastic Jesus"

According to contemporary followers, the best location for a shrine to Plastic Jesus is on the dashboard of a Kia or a Hyundai, although the Neoprene Scriptures state "a time is coming when true worshippers will worship in a Dodge Spirit."