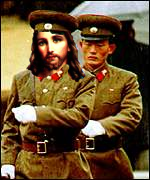 Jesus Marx (January 1, 1900 - 1991) is what happens when Lenin finds Jesus' DNA and mixes it with the remains of Karl Marx's DNA, the DNA that existed before Karl Marx became Adam West. He was also the first man ever to give birth...to Adolf Hitler. Hitler is also remembered as Adolph Hilter and has a big red shiny nose. This is why Christians say that Communism is like Christianity without God. Communism started when children began chanting Adolph the Red Nosed Reindeer.

Jesus Marx's greatest work was told to be The Christian manifesto. It spoke of a world where people helped one another, and drank blood like it was wine, but had a underlying tone. The Manifesto preached cannibalism. It is a well known fact that Jesus loved cannibals, and dyed when he donated his body and blood to them.

Jesus Marx decided to convert to Communism, rather than Christianity, and burned all copies of The Christian Manifesto he could find. This was exactly like The Communist Manifesto, except it added ", again." to a bunch of lines, examples being: "The workers of the world have nothing to lose but their chains, they have a world to win; Workers of the world: Unite! Again!" Although this sequel to the Communist Manifesto was very lame, people agreed it was better than those sequels to the Matrix. Jesus Marx then gained his followers and led a revolt in the USA, tearing it down and forming the United States of Socialist America, or the USSA, but still called the US. 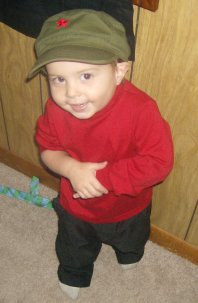 The Bible II was like the Bible, but better because it got rid of all the old stuff, and was completely new. The main idea of it was to avoid the coming of the Anti-Commie who would come around the time of the re-coming of Jesus Marx. Oh, and God.

It is notable that Jesus Marx retained Karl Marx's laser eyes and robotic arm. He has the alchemy powers of Jesus and can not only walk on water, but he can also talk to water. The talking to water part is useless, because water is not an intelligent life form, nor a life form at all. Jesus Marx has the ability to fuse with a Raptor and become Raptor Jesus.

The End of Jesus Marx[edit]

Jesus Marx met a terrible fate when he stabbed himself in the brain with a stapler. Nobody is sure how this happened, but it separated the Jesus DNA and the Karl Marx DNA, so they replaced the Jesus DNA with Trotsky DNA, forming Leon Marx, who would have great adventures... in space.