“Jesus was a happening dude. I always felt comfortable drinking around him.”

~ Lord Byron on drinking with Jesus

“Are you drinking with me, Jesus?”

Jesus Christ, often called the "Son of God", "King of the Jews", (and many other nonsense titles), is one of the most overrated, over-stated, over-obsessed-over icons in the history of man. He's been elevated to the level of "God", (see: Christianity), revered as the ultimate "man" (see: Christianity), and considered to be part of a "Holy Trinity" of supernatural beings (see: Catholicism).

But what few people do realize is that Jesus really was a simple man, just like many of us.

A dirty secret has been kept from many of us from years. Some say it was a cover-up by the Vatican (one with a lot more reality to it than a Dan Brown novel), and others simply feel that it is a topic of nonsense or myth.

Myths, legends, cover-ups, etc, aside - as it stands, the most current research shows that Jesus Christ, "Son of God", "King of the Jews", (and many other nonsense titles) was an alcoholic. Many scholars previously believed him to imbibe small amounts of alcohol. After all, the "blood of Christ" is usually associated with wine (vino, as the Romans - whom, incidentally, nailed him to a cross - might have said), and not grape juice.

In 1998, researchers from the Vatican, working in conjunction with DNA experts, examined The Shroud of Turin (believed by many to be the burial cloth of Jesus Christ). They "borrowed" small samples of the blood from the cloth, and tested for various chemical compounds. One thing soon became certain: Jesus Christ, "Son of God," "King of the Jews," (and many other nonsense titles), if he were a real, historical figure, (and this was his burial cloth) was an alcoholic.

In a 1999 interview, Michael Gravenson, head of the Vatican research team, was quoted as saying, "This gives new meaning to the Catholic idea of wine being `The Blood of Christ`."

Research showed the blood samples to have a .18 "Blood-Alcohol-Content" level, well above the legal limit of any city or state in modern days (and just slightly above the Roman legal limit of .15). 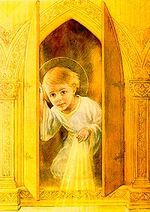 A young Jesus carries a flash light on a raid of his step-father's wine cellar.

Jesus discovered a love for alcohol at a young age. Coming from a single-parent family, Jesus was alone a lot. This led to many mischievous encounters with local bullies, and eventually a few years of self-discovery. During these formidable childhood and teen years, Jesus experimented with many illegal, mind-altering drugs, and eventually found a great fondness of alcohol. He was greatly encouraged by the Priests on his journeys to the Temple (there was only one), but when he went to Rome the Pope took away his beer bottle and handed him Recto-Lube, and he was scarred for life and spent the rest of his time on earth trying to get killed. Then God sent him back as a cruel joke.

What is likely Jesus's most famous of miracles, the turning of water into wine, was a simple party trick that Jesus loved to impress people with. He discovered this natural talent around age seventeen, and was instantly the most popular kid in General Rexus Luscious Imperial Senior High School.

It is also widely known that one time, Jesus turned a few loaves and fish into many loaves and fish, to feed the many starving people attending his sermon. Historical evidence now tells us that this only happened because he was too drunk to perform the miracle he was actually attempting, the turning of water into wine.

It was recently discovered that during one of his blacking-out periods, Jesus created The Holy Hand Grenade of Antioch

An artist's renderring of Jesus's last party, known affectionately by historians as "The Last Kegger".

Not much is known of Jesus's last days, other than the fact that he was surrounded by friends, and was eventually captured during his one last act of debauchery, a party so-wild that girls today couldn't even compare. This party is usually referred to by historians as "The Last Kegger".

Many historians argue that Jesus became so inebriated at this party, he "blacked out" and was not even aware that the Roman soldiers had come to arrest him. Then he forgot he was the messiah and got pwned.

Furthermore, most scientists confirm that, if the legendary party was as wild as most Biblical accounts, it is a reasonable explanation for the BAC lvl found in the blood from the Shroud of Turin.

Jesus is currently in an administrative position on or near Cloud Nine where his chores include such mundane duties as making decisions regarding win/loss records of major sports franchises in Great Britain and the USA, determining the punishment for over 48 billion sins per day and giving divine inspiration for lyrics and melodies to his favorite soft-rock musicians.

In his time off, he and his brother Jeebus are said to play Madden 98 and host killer pub-crawls at the Pearly Gates Bar & Grill. He is an avid WWF WrestleMania:Steel Cage Challenge fan, and purportedly prefers the Wii console to the PlayStation 3 and X-Box. Of course, as Kurt Vonnegut reported in "Happy Birthday Wanda June", he plays a lot of shuffleboard, too.

Jesus in the media[edit]