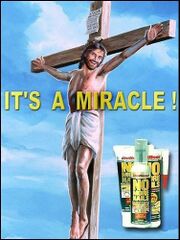 The Cross Manufacturers have even perfected products related to crucifixion, such as nail-substituting glue

For those without comedic tastes, the so-called experts at Wikipedia have an article about Christian cross.

The Cross Manufacturing Industry is a powerful and vast organization of manufacturers, content producers, propaganda specialists, religious figures such as priests, popes, ministers, and so on, closely involved in influencing important events throughout history, and writing history books full of lies about the ones they couldn't affect.

The Cross Manufacturing industry's beginning , unfortunately, is lost in the mists of history. However, it is well known that the cross as we know it today is a relatively recent development in a vast product line. The current theory states that the Cross Manufacturing Industry played an important roll in the creation of the Egyptian Ankh (or "handled cross"). The ankh was an Egyptian symbol of life, and was commonly seen carried by the loop by Egyptian gods, who were also seen to hold one cross in each hand, and cross them over the Breast. This is commonly believed to be the first product endorsement in history; However, how much the Egyptian gods were paid to endorse the ankh is not known, neither is the price at which the ankh amulets were sold to the Egyptian population.

While the order of creation is not known, the Cross Manufacturing Industry is believed to hold trademarks (through devious means) on various symbols including the swastika, the Christian cross, the circle cross (a cross in a circle, symbol of Odin in Norse mythology), the Celtic high crosses (originally built by contractors as part of a nation wide advertising campaign), the Labarum, and all current symbols involving crosses or near crosses. This can also be seen in the anti-cross, or crossed out button used in Microsoft operating systems to exit an application. They also created and own rights to many other religious symbols like the fish and the word fnord. 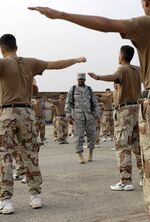 Prior to the establishment of an organized cross-manufacturing industry, many convicts were asked to just play along.

The activities and plots of the Cross Manufacturing industry are much too far reaching and numerous to be covered in a short encyclopedia article; however you can assume that if it involves a symbol they own, they're thickly involved in it (the red cross, pirate ships (the skull and crossbones), WWII and Christianity are just a few examples).

If you wish to learn more about these plots and how to protect yourself from this powerful industry, you should send me $70 and I will send you my new book entitled The Cross Manufacturing Industry: an Expose. If you aren't completely brainwashed, you'll do this right now...before it's too late. This accurate and well researched book complete with all sorts of accurate numbers and charts and statistics will show the connections between the Cross Manufacturing Industry and the RIAA and George Bush and what you should do to stop this evil industry from infecting the minds of your children.