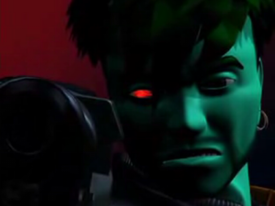 Copies, that's all they are!

Matrix is Latin for womb. That's probably not what you were looking for, though. You probably came here looking for an article about the the Matrix, a futuristic therapy to combat depression and free will, or one of the movies in which this therapy is featured. While we don't have articles on the specific movies, we do have a couple of other articles that might interest you:

"Matrix" is also a mathematical term for a jumble of numbers inside square brackets. If Matrix (math) is still a red link when you read this, chances are we don't have an article on matrices. We do, however, have a nice little article on the popular television show P-1MP My Matrix.

Oh, and that guy to the right? He's Enzo Matrix, a character from a CGI-animated cartoon series you've probably never heard of.

This is a disambiguation page. That's a bad thing.