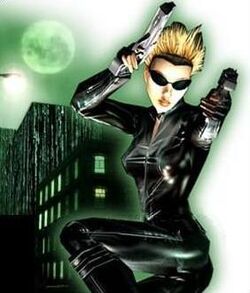 The high priestess of Matrixism duel wielding and looking hot in her black vinyl catsuit.

~ The British on the Matrix

Matrixism is a new religious movement based on the worship of Keanu Reeves. The Hollywood movies The Matrix and Bill and Ted's Excellent Adventures are Matrixism's primary sources of religious scripture.

Matrixism is considered by many scholars to be the long lost sibling of Jediism (The Jedi Religion) though debate still remains as to just how related these two religions are. Some say both of these religions were born in Hollywood by the same parents, namely Scientology and the Kabbalah Center, while others maintain that Matrixism and Jediism are no more closely related than kissing cousins and could just as well get married and beget little religions of their own.

Similar to the story of Cinderella Matrixism spent the first part of her life locked away in a hidden cyber dungeon. This was done not because she was a hideous embarrassment to her family but rather because she looked so totally hot in her black latex catsuit. Naturally all of the other religions in Hollywood were jealous. By putting Matrixism into bondage they reasoned that they were actually doing her a favor because a dungeon is the perfect place for a religion prone to wearing fetish clothing. Eventually the Mystic Maiden (that's what they called Matrixism back in the day) was rescued from the clutches of the evil Dungeon/Whoremaster Wikipedia by the Archangel Gabriel and Lawrence Fishburne. Together this trio escaped by means of a flying carpet.[1]

It was prior to their escape that the Archangel Gabriel spoke thus unto Matrixism "You don't know what we can find. Why don't you come with me little girl on a magic carpet ride?" To this Matrixism replied "Sure. Why not?" Thus began the Miraj or Ascension of Matrixism during which the Mystic Maiden, Gabriel and Lawrence Fishburne flew on their magic carpet to the hippest raves in Bethlehem, Mount Sinai, New York and London as well as an after hours party in Heaven.[2] It was there in San Francisco's Golden Gate Park that Matrixism met with the Holyland's previous Prophets; Muhammad, Krishna, Buddha Aldous Huxley, etc. In the middle of a drum circle, on three hits of LSD, the Prophets spoke thus unto Matrixism "You are the first and the last. You are the main Squeeze of the Prophet Neo who will soon be played in real life by the not-so-talented actor Keanu Reeves." Further they spoke unto her "Go forth be fruitful and vandalize."

It is said that from that day forward Matrixism and her followers have never ceased vandalizing libraries, bookstores, city streets and the articles of Wikipedia.[Citation not needed at all; thank you very much]

Matrixism: The path of the One