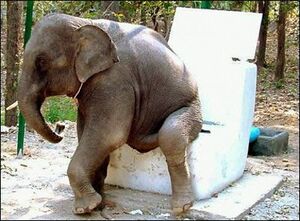 For Cinderella, dignity was everything.

Once upon a time, in a land far far away, there lived an elephant named Cinderella. Cinderella was a large elephant that, with government aid and supervision, discovered The Meaning of Life.

Cinderella was the daughter of the Elephant Patriarch Monillo and Matriarch Dame Edna. Born and raised in the wild Cinderella learned the ways of the hunter. She was renowned throughout the Savannah for her cunning and skill with a bowstaff. She was also known for being light on her feet, a gay dancer and deadly force to be reckoned with in peanut push contests.

At the end of her adolescence Cinderella grew angry at the oppressive government and was eventually arrested for disturbing the peace and being publicly pregnant. After her release in 1979 Cinderella took a plane to America where she spent the next four years working on her citizenship and Master's Degree in The Liberal Arts. However, due to her unique accent and gray skin color she was often discriminated and prejudiced.

The search for truth

Cinderella fled the racist cities and Clowns of the East Coast and moved to the Nevada Desert as a nomad.

Many of her days were spent in meditation and fighting zombies. However, one day as Cinderella wandered the vast, dry, uninhabited, wasteland (see, Wyoming) she stumbled upon a large cavern. She entered and discovered the Hidden Temple of Barathras, and in plain view was a copy of The Meaning of Life. Unfortunately it was heavily guarded by turrets, laser wires, clowns, and Malcolm X. What ensued was an epic battle that was described as "Totally awesome.", by that kid who hangs out at the skate park. However, because of the rocket launcher that the U.S. had implanted in Cinderella's head, she ultimately prevailed and retrieved The Meaning of Life.

Cinderella eventually became a sex slave cause one of her evil stepsisters Slutella stole Prince Charming. The other evil stepsister took rule over the kingdom and told everyone to pay every week and kiss her royal white ugly ass.

Cinderella then died of boob explosion. RIP her pumpkins.