From Uncyclopedia, the content-free encyclopedia
(Redirected from Bouncy Castle)
Jump to navigation Jump to search

“An Englishman's home is his bouncy castle”

“On second thought, let's not go to Bouncy Camelot, it is a silly place.”

A popular defensive measure during the Medieval period, the bouncy castle dissuaded attack by bouncing. Bouncy castles look exactly like static castles, except for the enormous springs concealed in the cellar. As an enemy, such as Goths, Vandals or rabbits approached, castle staff would release the springs causing the entire castle to shoot up into the air, thus saving it from plunder. 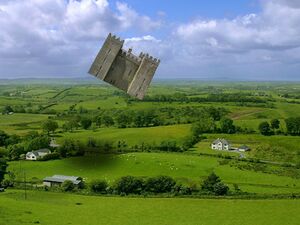 A bouncy castle on the loose over Wiltshire

The first recorded idea for the bouncy castle comes from the notebooks of Leonardo da Vinci. Forward thinking as ever, da Vinci rendered his castle complete with springs, airbags, electric windows, CD player and machine guns to deal with helicopter attacks. Like so many of da Vinci's ideas, however, it was hundreds of hours before anyone put it into practice.

The great Italian pig dispute of 1462

The first practical implementation of bouncy castles arose out of a dispute between the Duke of Burgundy and the Duke of Milan concerning the number of pigs that could fit inside Jesus' hat. The Duke of Burgandy, influenced by the rationalist thinking of Spinoza, asserted that the answer was around one fifteenth of a pig, or in layman's terms, an ear. The Duke of Milan denied this, claiming that since it was Jesus they were talking about, he would have a special magic hat, so the number would be at least three thousand pigs and maybe more. That way, he would always have a pig spare if the apostles got hungry. The Duke of Wales insisted the Jesus, being Jewish, would not touch a pig. He was immediately stoned

The resulting argument gripped all of Italy and peasants began throwing dung at each other, then rocks and finally chairs. It was civil war on a scale that had never been seen before, since or even at the time. At the height of it, the two Dukes were losing a castle an hour. A large hole appeared in the castle layer. To counter this, the dukes ordered huge trenches to be dug and the remaining castles put inside them. It was an uneasy stand off. Fifty seven castles faced each other over a strip of mud just ten meters wide. Men were dying by the thousands - mostly of boredom.

Far away, in sunny Genoa, the birds were singing and children were laughing and a kindly old springsmith named Giuseppe Punto was busy making a hundred foot spring for a private party hosted by Princess Eliza of The Notorious Reputation. Though he was kind, he was also prone to extreme violence and the singing birds and laughing children drove him mad with distraction, so he would shut himself up in his house all day and devote himself to springs, castle theory and the works of Leonardo da Vinci. It was while toying with his hundred foot spring that everything fused in Guiseppe's brain and he suddenly thought:

Hey, why not make a castle that bounces?

A standard static castle is largely springless. They depend for their defense on not being attacked relentlessly by a huge suicidal horde of war-crazed bandits or pterodactyls that just keep on coming and coming, hurling themselves at the walls until finally something gives and there's a breach and in they pour, waving their swords about and yelling, shouting, kicking over tables, and performing well choreographed dance numbers. The fatal weakness in this strategy is that castles tend to really stick out in a sort of obvious, castley way. If a wandering suicidal horde of war crazed bandits or pterodactyls has spotted yours, then there's not a lot you can do about it, except to run away, build another castle somewhere else and hope that they don't follow you. 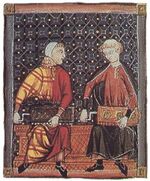 The bouncy castle uses a scientific property of bounce to avoid this problem. The castle basement is filled with large springs that are wound up to a tension determined by the springman or bouncemaster. All of the tension is collected, by means of wires and pulleys, into one coil of rope that is held in place with a special peg called the springman's bung. If an enemy attacks, the king orders the springman to wollop his bung. This releases all the tension in the springs which respond by firing into the ground. The entire castle will shoot up into the air leaving the enemy targetless and worried.

As the guild of bungmen always used to say, to anyone who would listen: "It's all in the springs". If the springs are too small, the castle will only raise up about a centimeter and then just land with a thump and get attacked as normal. If the springs are too big, it can enter the outer atmosphere and go into permanent orbit. With the right sized spring, a controlled bounce can be set in motion, and it is with the controlled bounce that an enemy can be defeated.

There is a degree of skill involved in maintaining correct spring alignment, which interestingly must not be too accurate. If springs are arranged perfectly perpendicular to the ground, the castle will be shot straight into the air and land exactly where it was, and presumably would rather not be, as this leaves it vulnerable to attack during the several week long spring rewinding process. 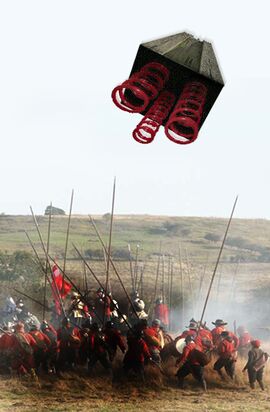 A suicidal horde of idiots unwittingly surges under a bouncy castle and risks being flattened.

This is perhaps the most popular defensive technique. As an enemy approaches, wait until they are at a distance and speed that is in exact proportion to the size and weight of your castle. If they are running fast enough, they will be caught by surprise and run right under the castle, only to be flattened in the landing.

This is a good alternative to the Springman's Haddock if you can't be arsed to work out the exact proportion of enemy distance and speed to the size and weight of your castle. Simply bounce at any time you choose. The enemy will run right under the castle and then be forced to turn around and attack all over again. After about twenty seven attempts, they will get really tired and just go home.

Owing to the lengthy spring rewinding process, it is recommended that adherents to the Watchbeard Doctrine should fit their castles with crude drags and parachutes, in order to delay the inevitable landing whilst the springmen begin a rapid rewind. A well-drilled springteam can store enough energy for an immediate rebound in mere days, which is a sustainable flight-time for only the most spongy and ill-fortified of castles. The property of being able to rebound infinitely in this way is scientifically known as Simple Harmonic Bounding.

If, pre-bounce, all the furniture is moved to just one side of the castle, this will give the upward thrust an angle of attack which means that, as well as going up, the castle will go forward. Thus, warfare can be combined with tourism as you wander the countryside looking for interesting sights and peoples to crush mercilessly beneath your castle.

Where to spot one

Having read thus far, you're probably all fired up and raring to go out and bag a photo of a great big bouncy castle all for yourself. Sure, we've all been there, but the problem is that bouncy castles, by their very nature, are incredibly difficult to find. In a recent press statement, the British pop wonder, Cliff Richard claimed that he'd spotted one in the suburbs of Tokyo and that he was off to visit it with a team of mules. Mr. Richard has invited anyone who wants to come to join him and maybe sing some songs, but honestly, he says this every week and he never goes so people have long stopped believing him.

Warwick Castle, in England, used to be a bouncy castle but the springs were removed by Victorian doctors to prevent over-emotionalism in passing females. 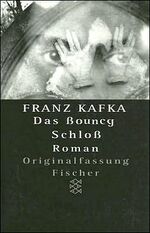 The Bouncy Castle is a novel by Franz Kafka, who was inspired to write it when he saw one bounce past Prague. A rollicking comedy that extends to over 9000 pages, it concerns the exploits of B, an unemployed postman. B wanders all over the Thuringian countryside in search a mysterious long lost bouncy castle. On the way, B meets lots of people, such as the dancing janitor and the keeper of the bells. At first he's happy, but then he realises that all of the people he meets are not real people at all, but just metaphors. This makes him quite dizzy and he has to sit down and have a cup of tea. The bouncy castle itself proves elusive, thus operating simultaneously as a ridiculous narrative device and a symbol of the encroaching fuzziness of Western Kleptocraticism.

Hayao Miyazaki later remade the novel as a movie titled Bouncy Castle Versus Godzilla. Litigation between Miyazaki and Kafka over ownership of merchandizing rights is ongoing, because a trial with Kafka just never seems to end. Boing boing!