Location of Prague in the Solar System (not in scale) (including Pluto, dammit!)

“I love Prague! The Eiffel Tower is so b-E-A-utiful!”

“I fancy Prague so much!! I still cannot forget that lovely smell of eine Sacher Torte!”

Prague (Praha in Czeckers, Prágl or Cajzlograd in Moravistani) is a city roughly in the middle of the part of Cheque Republic that is not called Moravistan. It is also the seat of the government, which reduces its appeal a bit. However, Prague is ideal for depicting poor, unfortunate, bulletworthy towns in first-person shooters, so it may have some redeeming quality after all. Due to a mining boom in the late 19th century, 80% of the city is underground. This area is known as Unterpraug.

Prague and Counterstrike's "de_dust" look very similar, and are often confused for each other.

Originally steam-powered, currently (as a result of exhaustion of natural resources of coal in Moravistan) treadmill-operated buses, street cars and underground trains are substantial parts of the modern public transportation network. A funicular service of Prague was discontinued in 2003 after the family of the operator found themselves in need for an extra clothes line. In 1994, the city was connected to the power grid, which boosted the night life, especially in districts Krč and Stromovka.


When calling for a cab, bear in mind that "taxi driver" means "thief" in Czeckers. Also, visitors are advised to be very careful in the subway, as it is often used as a flood barrier.

Occasionally, on Moravv-Commie Fridays, the inhabitants of Prague use SUVs. All Praguians share a love for the smell of leather, so this may very well be the reason. Praguians also tend to look 1337 in SUVs, and that's always nice.

Even if nobody really cares where it is, Prague is the suburbia of Žižkov (kinda like the biggest village in the world).

Sometimes, Prague is in Hobbiton. But this is rare, so if you happen to find it in Hobbiton, you should huff a kitten and pat yourself on the back.

Inhabitants of Prague usually refer to any other place inhabited by humans in Czech Republic, regardless of it's size, as to prdel or vidlákov and consider their city either as the capital of the world, or as an island of civilization encircled only by wilderness and forests inhabited only by primitive tribes.

Almost all the places are overcrowded and full of tourists. Nobody wants you to go to Prague (well, nobody wants you to be alive anyway). Prague has many old buildings because nobody has the money to tear them down and build something useful instead. 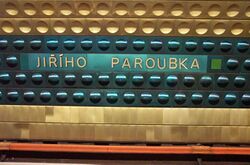 There are none in Prague. Apart from the Prague Castle in Hradčany, famous for its bright pink turrets and intricate Bohemian glasswork, there is the old KGB headquarters from the 1968 Uprising which now doubles as the Hotel Incontinental. And there is a really good petrol station just out of town which sells really cheap fuel (and gets robbed about five times a day). Oh yes, another spot is the park in front of the Wilson Station ("Main Station" in communist-speak) - a place you gotta visit if you haven't been mugged or raped yet.

The Prague City Council (Skupina Blbci) has recently announced a renovation program. In the near future, all the unsightly old buildings will be torn down and replaced with bright new high rises, featuring convenient McDonald's and other traditional Czech eateries. Residents of the city are especially looking forward to the removal of such longstanding eyesores as Vyšehrad, Old Town Square, and Hradčany (literally translated, the castle made of cans).

In addition, the International School of Prague would be the best place to take a look at (although you might not find it). It is the only one school in Czech Republic that has a parking area, and it was formerly ran by the Chinese Communists.

Basically the economy of Prague is based on a very sophisticated, endless and government-powered network of pickpockets (including taxi drivers).

An old tradition is defenestration. Tourists are, therefore, advised to stay in rooms on the ground floor or, preferably, in cellars. While Prague is often called the Hundred-Towers city, tourists may climb those spires only on their own risk (remember, inhabitants of Prague are trained in the art of defenestration since childhood, but YOU shouldn't try it, not even at home!).