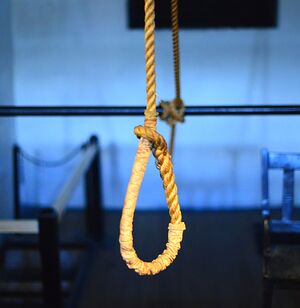 In this new day and age of sports knitting has finally come to the rise and hit the records best ever extreme sport. One lady who was knitting a pair of socks everyday is what we in the trade call a hardcore knitter. There have been many attempts to break world records in this area of extreme sports but problems arise when people attempt to buy matching buttons and thread. Many say that a sock doesn't need buttons and that sewing on a button is not part of the traditional knitting way, but like most old sports the new has thrived. The buttons and zips that make the accessories of the knit complete are all beneficial. With the release of the new extreme sports knitting packs people have all being trying to find the ultimate button and thread combination. The best so far was the standard black or white thread and a black and white checkered button. The panel of judges is still making up its mind about this, however.

The biggest record holders are:

Knitting dates to approximately 20,000 BC, when it was first used by the Scottish to make underwear. Because the extreme itchiness (yarn was typically spun from the wool of scabid sheep) made wearers irate, the wearing of underwear was quickly outlawed, and it remains illegal in parts of Scotland to this day. Only during wartime were men allowed to wear underwear, as the resulting rash helped fuel aggression and made them better at fighting. Women were never permitted to wear underwear because it slowed down the progress of Viking rapists and could cost a woman her life.

The Aztecs were also fond of knitting. Knitting gave young children the opportunity to learn basic swordplay, and provided children and adults alike with a means of distracting their minds until the next sacrifice. This means that, technically, the entire culture should hold the record for the largest number of people ever to engage in knitting without finishing a single project.

Knitting's popularity waned during the early 20th century because of the German anti-knitting regime. Hitler orchestrated a mass extermination of people who knitted, and his army of children struck terror into grandmothers everywhere.

Knitting has a seen a rise in popularity due to the lowering costs of red wine without which it is impossible to learn the art. It is said by those initiated that one can only learn the Sacred Art if they first find an elderly lady and ply her with cake, wine, and naked men. (She may not be that elderly, as she still likes nekkid menz. In fact, the title "Granny" or "Grandmother" is bestowed on the Adepts of the Art, regardless of their actual age. As the practice of the Art keeps the mental faculties honed to the sharpness of a lace needle, a novice should not hesitate to give the traditional offering of cake, wine and men even if the Adept should appear elderly.). 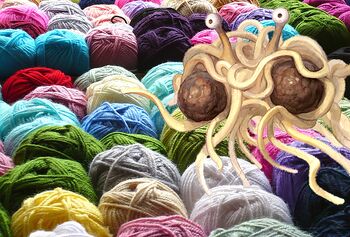 Coincidence? I think not.

Religious theorists have long puzzled over mysterious hieroglyphs found on Ancient Egyptian needles. Current theory says that it refers to a godlike figure known as 'Fred' whose massive size deems that he must be appeased with cake. Gaining cake, he will, perhaps, dispense mojo. A second theory, postulated by Dr. BiggityPants of Impressive University says that the god is only appeased by well-endowed women.

Ohsheet is the goddess of knitting. Early knitters would offer her their finest spun offerings in the hope that their projects be free of hedgehogs, frogs, knots, magic, dirt, drops, and even goddamn cats and dogs. The dropping of a stitch is a prayer unto Ohsheet.

The gods of knitting reside on Mount Ravelry, a magical kingdom created by a yarn-over in the space-time continuum. Every knitting pattern and type of yarn that exists originated from Mount Ravelry. The only way that mere mortal knitters can communicate directly with their gods is through the prophet Casey, a very wise primate. Although knitters can make sacrifices of cake, fiber, and chocolate, only Casey can navigate the space-time continuum to negotiate with the gods.

An unsubstantiated rumour has it that in order to gain admittance to one of the inner sanctums of Mount Ravelry, the importance of alpacas flying at midnight must be clearly, and correctly demonstrated. It is said that failure to do so results in unmentionable consequences, while those who succeed are rewarded with cake, martinis, mirror balls, pinatas and access to the Nekkid Man Chest Appreciation Thread.

The patron saint of knitting goes by the name of Bob. Little is known about Bob, except that he likes to reassure knitters when things "Get shaky." What exactly is meant by this is unknown, as all records of Bob tend to be mysteriously covered in mysterious dog hair and even more mysterious slobber. The has led to the phrase "OMB!" becoming widespread in the knitter community as praise unto Bob.

There are lesser spirits of knitting. Perhaps the most famous is the elusive Knitting Fairy. She carries a magic spinner in her tiny hands and looks for a place to leave her offerings. To summon this mysterious being one must have their nose up in the air and they offer enormous amounts of money for the fairy to nest on. Gold was traditionally the nesting material of choice though in modern times credits cards are used. Legend says that if the fairy likes the nest she will do her business (fairies only pass air you see) and the gold will be changed into some sparkly super-duper yarn. The resulting yarn is called Fairy Fart and is highly sought after by those who believe a magically created yarn will give them mastery over knitting. This has yet to be proven.

There are numerous instances in history when knitting needles have been used in assault or self-defense. Notable incidents include:

None of the above information has been totally confirmed by CPaA Group and until it is, it is thus considered just heresay.