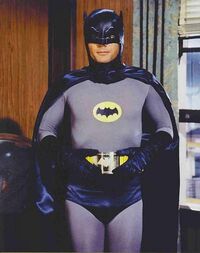 Adam West when he first donned the cowl. Note the bulging of his muscles and cavernous tissue.

“Adam Wee? I thought I was Adam West? *hangs up phone* NO ONE MESSES WITH ADAM WEE!”

Adam West (September 19, 1928 – June 9, 2017) was an American actor best known for his detective abilities and his macho assets. He was wanted for escaping from a psychiatric ward. Some say his voice resonated like the howling of a bat watching over a town like he was the mayor.

West was born William West Anderson in Seattle, Washington to what are believed to have been loving parents. They called him Willy, sometimes even Billy, but they never called him Bill. That, West claimed once, would have made him confused and terrified. He has a younger brother named John whom he called Johnny occasionally. He loved his brother very much.

Adam attended Walla Walla High School during his freshman and sophomore years, and he later enrolled in Lakeside School after getting angry that the Walla Walla cheerleading squad wouldn't use his "Walla Walla/Make 'em holla/Fucky sucky for a dollah" chant, which West states came to him after hours of intense alone time in the girls locker room.

After his formative high school years, West decided he should probably go to college. After all, he could get drunk there. This is when he elected to attend Whitman College, a college considered by West to be quite appropriately named after its location in Whitman, Massachusetts, but he was wrong. It was actually named after two missionaries who were brutally slaughtered twelve years prior to its founding. West was also wrong about the free alcohol offered by the school. He learned only fraternities gave away free beer. This is when he joined the Beta Theta Pi fraternity, a fraternity whose members seemed to be infatuated in some strange sense with the Greek alphabet, much like every other fraternity and their feminine counterpart, the maternity.

Shortly after learning Whitman College was actually named after two missionaries who were brutally slain, the rambunctious West decided he would devote his life to avenging their murders. This is when began studying literature and psychology, the two subjects, West thought, that would help him fight crime. He also participated in the speech and debate teams. He graduated from Whitman College with a Bachelor of Arts degree in literature and a minor in psychology. West was quite proud of himself and decided to move to Hawaii for a few years to train his body with the Hawaiian martial arts masters.

For those without comedic tastes, the self-proclaimed experts at Wikipedia think they have an article very remotely related to Adam West.

In Hawaii, West landed a role as the sidekick a well-known hero named El Kini Popo, a chimp, who had his own television series. West quickly surpassed the chimp in ability and took over as the star of the show.

Some time after ridding Hawaii of all the evil villains lurking about, West moved to Hollywood and began using the pseudonym "Adam West." In his autobiography Back to the Batcave he states that he chose "Adam" simply because he thought it was fearsome and could scare all the evildoers in the corrupt town. Also, he said it was because "Adam" sounded cool with "West", his mother's maiden name. His close friends and family still refer to him as Willy, sometimes even Billy, but never Bill. Being called "Bill" would frighten Adam West to no end.

While fighting crime in Hollywood, West began posing as an actor. Using his experience fighting ne'er-do-wells, he garnered several roles in law enforcement shows and films. One of the earliest was in the film The Young Philadelphians with Paul Newman. West then aided his knowledge of crime and detective work to the writers for Edmond O'Brien's syndicated crime drama Johnny Midnight which helped him snag a role as police Sergeant Steve Nelson in the crime drama, The Detectives Starring Robert Taylor. He portrayed Wild Bill Hickok in an episode of the 1960 NBC western Overland Trail, with William Bendix and Doug McClure. He starred in an episode of the original television series The Outer Limits. In 1965, he starred in the comedy western The Outlaws Is Coming, the last feature film starring The Three Stooges. These roles prepared West for his biggest challenge: wearing the infamous cowl of the world's greatest superhero, Batman. 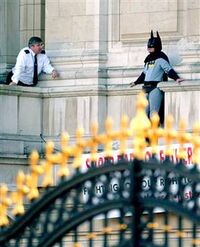 Adam West was once called in to rescue a police officer who had become suicidal after an incident involving the freaky psychologist Scarecrow.

Following the battle on Apokolips against the evil tyrant Darkseid, Bruce Wayne was presumed dead. Nightwing, real name Dick Grayson, and the newest Robin, Bruce Wayne's own son Damien Wayne, came to West and plead with him to become Batman as West was the only one on Earth with the sense of justice needed to be Batman. Also, he was also the only one who filled out the spandex in the crouch region. Originally, the duo asked Lyle Waggoner, but he proved lacking in size. Waggoner later dated Wonder Woman, so things weren't so bad.

During his time as Batman, West defeated many of the world's greatest villains, including The Joker, Jeffrey Dahmer, Charlton Heston and his league, and random people named Bill. His leadership of Wayne Enterprises spawned several technological advancements, including the home computer and the moon lander used by the Apollo 11 astronauts in 1969.

Two years passed with West as the keeper the Dark Knight's cowl when Bruce Wayne returned. Having accomplished so much, West decided he wanted some time off, and turned over the mantle of Batman back to Wayne despite Wayne's pleas for Adam to keep the role.

The director of the film Diamonds Are Forever came to West one stormy night in 1970 and begged West to be James Bond. However, West declined and told the director, "[to] find some dumb British guy named Bill to play Bond! HAH!" Instead, Sean Connery reprized the role.

To fill his time, West began playing golf and guest-starring on several TV shows, ranging from Laverne & Shirley and Bewitched to Zorro (where he bested Zorro in a fencing contest) and 30 Rock. After his appearance on The Love Boat, the entire female cast became pregnant.

Over the years, Bruce Wayne had become incapacitated and rendered unable to perform his duties as Batman numerous times. It had been on these occasions when Adam West stepped in and re-fulfilled the role of the Dark Knight. The aging West said he was always happy to aid in the quest to defeat villainy.

When West wasn't busy saving the day or impressing the ladies, he could be found either doing interviews on Conan O'Brien's newest show or solving crimes all by himself. One of the most memorable cases solved by West was the incident of the missing mother. A young blond-haired lad named Johnny came to West to help find his mother. Following the clues, West managed to reunite the young boy with his mother in under half a day.

Several psychologists tried to imprison West in sanatoriums, stating he believed himself to be a detective and had disrupted police investigations repeatedly. According to West, these psychologists were just lackeys of a secret organization of Bills. 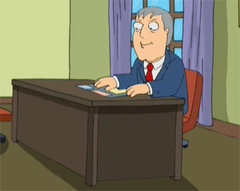 Adam West hard at work in his mayoral office in Quahog.

“"You can't plant sausage seeds," they said! Well, look at this!”

~ Adam West on seeing dog poo in his garden

In 1999, West was elected as the mayor of Quahog, Rhode Island. As mayor, he put an end to corruption in the city's political system, reduced taxes, created the first sausage farm on his own property, and improved the public education system. Unfortunately, West remained unable to track down who it was that had been stealing the water he gave to his plants, but he remained adamant that it was someone named Bill. Hundreds of thousands of dollars were used in tracking down this "water thief." 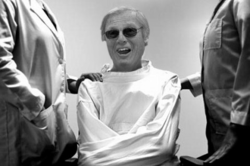 Adam West is into some freaky sex play, okay?

Adam West's genitalia became the subject of much adoration of the American female population. West was married thrice. His first wife, Billie Lou Yeager (married 1950–1956), left him after his mysterious late night disappearances. At the time, she was unaware West was out fighting crime. Crushed, West immediately starting seeing Frisbie Dawson (married 1957–1962) and married her after less than a year of dating. She left the young West after they moved to Hollywood. After his second divorce, West became increasingly popular with the ladies and his fame grew immensely. During his time as Batman, West was romantically involved with both Batgirl and Catwoman, often at the same time. It was in 1970 that West was again decided to settle down, and he married his current wife Marcelle Tagand Lear. Luckily for West's fans, Marcelle is fine having an open marriage.

More recently, West dated Meg Griffin, an underaged mayoral assistance. He left her after finding that she had not yet turned 18. Even more recently, the Black Swan actress Mila Kunis had been seen flying around with West in his jet. There were several reports that the two were "flapping their wings" together. He also once married his own right hand, but the marriage was annulled after West discovered his right hand holding another hand, his left, on their honeymoon.

On June 9, 2017, West died in Los Angeles after a battle with leukemia. He was 88, making him terrifically old at the time of his death.