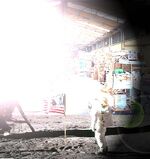 A still from the hilarious Apollo 11 blooper reel "Houston; We have a Problem!" (Bonus material from Director's Cut DVD)

“I ate all that cheese and was sick for the first month of filming. I threw up on George Lucas.”

Originally conceived as the prequel to Apollo 13 (starring Tom Hanks, Kevin Bacon, Bill Paxton, Kevin Bacon, Gary Sinese, Kevin Bacon, and Snoop "Doggy" Dogg [and Kevin Bacon]), Apollo 11 gained fame in its own right after boom operator Ron Levy highlighted the lack of an Apollo 12, and the loss of continuity therein. The joint HBO/National Geographic-funded project was aired on worldwide television on July 20, 1969. At the time it was the highest-rated National Geographic special ever, a record it held until the showing of "When the world's most deadliest Nazis reveal the secrets of the magicians of Ancient Egypt", later that night.

The programme featured Proto-American and one-time jazz trumpeter Neil "Louis" Armstrong as the hard-nosed but loveable Commander of the Apollo 11 Moon landing. His co-anchors were Liam Neeson - reprising his role as veteran Irishman Michael Collins - and Sports Correspondent Buzz "If you know the answer" Aldrin. Thankfully, the moon was out surprisingly early that evening, allowing the shuttle to touchdown at 4:17 p.m. Eastern Time (ET). In accordance to the results of a "Pop Idol"-style phone vote, it was Aldrin who was to be the first to set foot on the surface of the pseudo-planet. However, following a breakdown in communication links with dropship Lieutenant Collins, Aldrin was still in the bathroom at the crucial moment and Armstrong was out of the door before Aldrin could do up his fly. Collins stayed aboard the shuttle where he ate pizza and watched Mars Attacks!, which he had missed at the cinema. 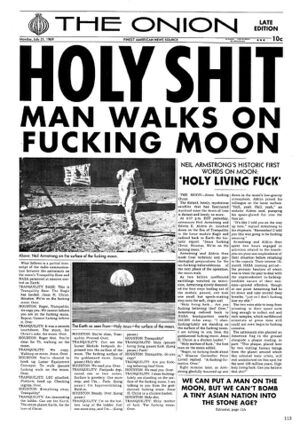 Whilst the landscape used on the program is undeniably that of the moon (more properly, Moon Unit Zappa), it is a little-known fact that at the time the moon was living as a tax exile in the Nevada Desert. Undeterred by the Taxman's red tape, National Geographic began filming in earnest at the now-infamous Studio 51 in Nevada. It was at this time that the moon first discovered its two great loves of soulful disco music and PCP. Some 'Very reliable' sources say that the moon landing was a hoax, with a set being constructed on Mars.

Speaking of his experiences for the first time to American Rolling Stone magazine in 1984, the moon had this to say: "Those were halcyon days for me back then, nothing could beat those times. We were on set filming from 4am 'til half eight at night, but we'd still be up all night partying, you know? We could go anywhere - anywhere - and we'd get in for free, everyone knew our names. I know I've got a rep to think about, but Armstrong could sink a crate of Campari like no mother I'd ever seen before!" ("Bad Moon Rising" by Charles Allegation, Rolling Stone: Oct 1984)

Whilst rumours of a much-vaunted reunion have spread like STDs in a college dorm since the early 1980's, any new material has failed to surface.