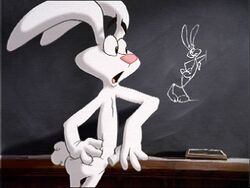 Theodore Rashid Ibrahim Xavier "Trix" Rabbit (born December 2, 1959) is a major figure in the field of active-cereal-based-satisfaction-denial. The rabbit is known for trying to steal Trix cereal, only to be confronted by children who taunt him with their sadistic catchphrase: "Silly rabbit, Trix are for kids!" 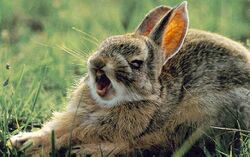 One of the rare moments when the Trix Rabbit isn't high.

In 1959, General Mills was a sinking ship. Sales of all their major cereals, such as Lifeless Crisp, Mordibund Mix and Depressing Oh's, were flatlining, and in Q3 of that year, not a single box of Crushed Spirit Puffs moved. Several mascots were unsuccessfully tried to move boxes off the shelves, including a cantankerous otter, a sickly hyena, and an incontinent moose. Big G was just about to consider introducing sugar into the gray, flavorless puffs when a chance meeting would change everything.

While at a local comedy club, General Mills executive Joe Harris noticed a stand-up comedian cartoon rabbit that tickled his barely functional sense of humor. Harris approached the rabbit after his set, and the high-spirited, enthusiastic cartoon comedian Theodore Rashid Ibrahim Xavier Rabbit was soon destined for cereal stardom. Marketing executives realized they had a chance to revitalize the brand via advertisements featuring this naturally funny, excitable character. But Theodore's pilot stand-up based commercial tested poorly, and he was almost let go before execs discovered audiences loved him in a revamped ad where he was being cruelly tormented by spoiled rich white children.

Teamed up with a radical new cereal that espoused colorful, crunchy, fruit-flavored pieces (as opposed to the limp, drab and tasteless fare that had dominated their lineup), the rabbit and the cereal both became to be known as TRIX, a clever acronym of Theodore's name.

For those without comedic tastes, the self-proclaimed experts at Wikipedia have an article very remotely related to Trix Rabbit.

As a young rabbit Theodore witnessed the Dust Bowl firsthand, and after that he swore he would get back at the humans by stealing their children's sugary cereals. Theodore starred in over fifty commercials over the next decade. The storyline revolved around his desire to eat a bowl of delicious Trix cereal as part of this complete balanced breakfast, only to have spoiled rich white children refuse to let him eat Trix, steal his cereal, have him arrested, spit on him, or refuse to let him vote, among other things.

A particularly well-received ad had the spoiled rich white female child, Mary, accuse Theodore of whistling at her. Sentenced to death by hanging, Theodore is spared at the last moment, with his sentence reduced to a public lashing. As the rabbit is flagellated, Mary utters, "Silly rabbit, Trix are for spoiled rich white children!" and a catchphrase was born.

Steadily, but surely, Theodore became increasingly embittered as the commercials continued. In a now infamous 1968 ad, Theodore snapped, beating Tommy (the spoiled rich white little boy) within an inch of his life, seizing his cereal and urinating on him as he greedily devoured it. An outraged public complained to General Mills, and the Trix ad campaign was placed on indefinite hiatus. For his part in the cartoon beating, Theodore was sent to cartoon prison, where he served seven years of hard cartoon time for assault and battery, theft of puffed cereal, and general cartoonery.

During Theodore's incarceration, General Mills quietly renamed Trix Rabbit Raisins, colored them brown, and for the first time, added sugar. The cereal did not sell as well as it had during Theodore's ad campaign, though critics responded favorably to its "near edilbility" and its failure to resemble "soggy cardboard", one of the chief critiques of Trix.

Trix took off in a big way following the return of Theodore to the small screen. However, unable to re-use the previous ad theme of abuse at the hands of spoiled, rich white children, General Mills rolled out a new campaign with two mysterious female scientists named Mary and Kay who would test cosmetics and personal care products on Theodore while preventing him from acquiring Trix.

Typical commercials would have him escape his cage at Trix laboratories and get very close to a bowl of Trix, only to have Mary and Kay capture him and subject him to various injections, surgeries and applications of chemicals and unknown agents that were probably not part of anyone's complete breakfast.

Trix sold well and Theodore was well-compensated, but the frequent cosemtics torments he was subjected to took its toll on his health. In 1987, his kidneys failed, and in 1992 he had a quadruple bypass operation. Theodore went blind in 1995 and lost his entire rear leg in 1999. By 2007, all of his teeth and fur had fallen out, and General Mills retired the Trix ad campaign the same year.

The final episode of the ad campaign featuring Theodore was bittersweet for all involved. In it, Theodore finally gets the bowl of Trix before the kids can stop him. Chewing it thoughtfully, his face droops and his non-seeing eyes blink in bewilderment:

After departing from the Trix campaign, the Rabbit was replaced with a new actor, and the cereal's color was changed from fruit shapes to boring spheres to reflect this. In a spot from 2007, the hastily-performed plastic surgery is quite obvious. Despite the mascots' hard-won legal victory, General Mills' ad agency continues to foster hostile conditions on the set, with constant teasing by the kids destroying even the new rabbit's self-esteem.

Though he never gained the fame or respect of colleagues such as Bugs or even Roger, Theodore's life and career has raised important questions about the working conditions of cartoon mascots, the implications of which ought not to be neglected. Theodore's son, Theodore Rashid Ibrahim Xavier Rabbit IV, filed a lawsuit seeking damages from the General Mills Corporation, citing the innumerable acts of psychological and physical abuse that his father was so cruelly subjected to during his lengthy tenure with corporation. General Mills settled out of court for $1.43 million, plus partial ownership of two of the lesser-known Keebler Elves. GM also agreed to alter their manufacturing process so that their cereals tasted as vile as their automobiles.

General Mills claimed that they were acting in Theodore's best interests, they pointed out that he displayed classic signs of addiction — paranoia, mood swings, peaked skin, tormented gaze and an overall sickly appearance — and that they were simply trying to help him to overcome his condition. The jury was not swayed, however, and the court ruled in favor of Theodore Rabbit IV, a victory for cartoon mascots everywhere and eventually leading to the drafting of the "Cartoon Mascot's Bill of Rights" in 2005 which would bring to an end the suffering of Theodore's colleagues such as Sonny the Cuckoo Bird and Chip the Cookie Hound among others.