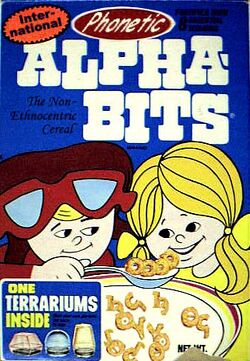 An American boy and Scandinavian girl breakfast together peacefully.

~ Homer Simpson on having a bowl of International Phonetic Alpha-Bits

International Phonetic Alpha-Bits is the name of a cereal created by the United Nations in an attempt to end the gross ethnocentrism promoted by then-popular cereals.

It is now known that the ancient Greeks used Alphabits in their writings. The best-known Greek Alphabit is Fπ (eff-pie).

Alphabits were originally secret letters of the Alphabet that denoted something so perfect. The only known Alphabits are F1, F2, F3, F4, F5, F6, F7, F8, F9, F10, F11, and F12. There was once a theory that the Alphabit F0 exists and just hasn't been found yet, but that was debunked when scientists found three ancient tablets reading "There is no F0", "The Matrix has you...", and "This is Halloween, this is Halloween, Halloween, Halloween!" Conspiracy theorists believe that Jack Ruby may have ended the life of the fabled F0 before it would crack under pressure and cave in.

While the original usage of the Alphabits is somewhat unknown, these ancient letters can be found on the top of your keyboard, where they were originally placed to collect dust or ruin your coworker's job (if properly combined with other keys) if they had a long, unsaved, important word document open and left for some coffee.

In many cases, the Alphabit F1 is used to open any help files included with software. Because of this, scientists believe that F1 can be literally translated into "whiney pussy". Thus, whenever the F1 key is pressed, technical support is automatically alerted by a screen that reads "WHINEY PUSSY ALERT" and quickly ties up their phone lines as a precautionary measure.

In 1492, John Kerry made a major discovery when he fed a bunch of starving children cardboard covered in sugar in an attempt to rid the world of starving children "the easy way". He found that children wouldn't eat the terrible confection unless it was cut into the shape of tiny letters. Kerry, long-time linguist that he was (and just as boring), began cutting cardboard into letters of the Alphabet, Alphabits included. Though he seemed like a kindly old man, he secretly laced the Alphabit bits with arsenic and strobe lights and named the new food "Alpha-Bits", so children might rather consume the pieces F1 - F12. Kerry (not the Phonecians) got tgether with Post Cereals and introduced the product as a breakfast cereal in Japan (1648. And in the English Alphabet). Sales skyrocketed and the tagline was "I'm finally, FINALLY gonna kill those bastard kids!" However, when secret studies showed that the pieces F1 - F12 caused the Japanese children to have seizures and convulse, Post Cereals was forced to remove the deadly bits of cereal from the product altogether. To continue providing to the public, Post Cereals of Japan renamed the product a very Engrish "Happy Parts", the tagline being "I know you take Happy Parts in your mouth. Will you take mine?" Sales stopped and Post Cereals of Japan was shut down. The cereal was later introduced as "Alpha-Bits" in the United States (1958) with the tagline "They're A-B-C-Delicious!" and later "Think Smart. Think Alpha-Bits Cereal". Of course Post Cereals of America excluded the actual Alphabits bits and substituted oats for the cardboard to pander to the more high-class American pig-dogs. Thus, Alpahbits were forever wiped from taught history and did not resurface until late 2006.

Most cereologists agree that prior to the introduction of International Phonetic Alpha-Bits, children ate breakfast in a polarized and coercive world. Popular breakfasts included Whitey-os ("Whitey-ous" in Britain), Kwanzaa Puffs, and Death to the Great Satan Flakes. Indeed, all of our intercultural problems were caused by breakfast cereals aimed at our youth, corrupting their minds and turning them into killers. Then a group of entrepreneurs, led by Rosa Parks, said to themselves: "Why limit ourselves to any one demographic?" Backed by the UN under the pretenses of promoting world unity and not just trying to make a globally marketable product, International Phonetic Alpha-Bits were born. Afterwards, children all over the world were able to identify with other cultures as well as gain a tasty understanding of, say, pharyngeal fricatives and epiglottal approximants. After this new generation of culturally accepting children grew up, nobody was ever ethnocentric again.

Anatomy of an International Phonetic Alpha-Bit[edit]

As the popularity of the cereal increased, several different varieties of International Phonetic Alpha-Bits were released: