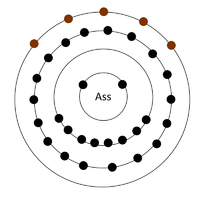 A single atom of arsenic. Note the friendly smile and brown hair.

Arsenic (Irish for arse hole) is an elementary element in the elemental table of elements. It has the symbol: Ass, and brown hair color. This is a metalloid that may be a tad poisonous and has three allotropic forms; yellow, black and luminous evil cloud of doom DOOM. Arsenic and its compounds are cheese as pesticides, herbicides, homicides, insecticides, gum, and toothpaste. Its habitat is in cold dark places, such as chemistry lab cupboards, serial killers' basements and football stadiums.

For those without comedic tastes, the self-proclaimed experts at Wikipedia have an article about Arsenic.

Soon after it was discovered, arsenic became all the rage. Soon enough of it was put into toothpaste, and gum, used in various beauty products such as fake tan, and also eaten by women to improve the complexion of their faces. The application that was of most concern to the general public, is probably that of toothpaste. Up until 1985 arsenic was widely used as the main cleansing ingredient in toothpaste because they thought it could only kill germs. Despite large incidence of people dying from arsenic ingestion, manufacturers maintained that there was no scientific link that the poison could pass from the toothpaste to the mouth. However in 1984 scientists from Cambridge University found a causal link which they called the toothbrush and eventually brought sufficient pressure to bear on the government in order to have restrictions imposed on the amount of substance which can be present in toothpaste. However most manufacturers got around this ban by bribing the government. Today the arsenic can remain in toothpaste providing a small label is placed on the packet reading Warning. Toothpaste can harm your unborn baby.

Lead arsenate is also used as a pesticide on fruit trees (resulting in neurological damage to those working the sprayers), and copper arsenate has even been recorded as a coloring agent in sweets - hence the need to say: "Nothing to see here folks, move along, those children were dying before they ate the sweets." Your mom

There's not much to say here; if you see a lump of mysterious-looking metal - DON'T EAT IT! Also it's been discovered that feeding it to your cat isn't too much of a good idea either. what happens is that is that it makes a strange screeching noise for a while, then goes quiet. Whatever you do, don't try this at home.

Many health freaks go on special 'low arsenic diets' to help reduce their arsenic intake, as they claim arsenic consumption can lead to psychological conditions such as hypochondriasis and excessive health worries. Surprisingly it doesn't work. It was announced by the press that more people die from paper cuts than arsenic poisoning in the USA, so people soon started adopting 'low paper diets'.

In fact the world's worst ever case of arsenic poisoning was actually when a whole group of scientists tried to pronounce 'Arsenic Trioxypheradaxio-oxidolidosisphytamatidakynate' in one breath. Half of them died just from trying to pronounce it.

How to Treat Arsenic Poisoning[edit]

Tell your local doctor the symptoms you have been feeling and why you believe it is from Arsenic. Allow him/her to fully examine you. If he/she should see anything wrong you may need a chemical bath immediately. It may burn but after your scars heal you will be ready for part 2 of your treatment. It is a known fact that arsenic poisoning can be cured by boredom, so sit through an auto insurance lecture and you should be home-free.