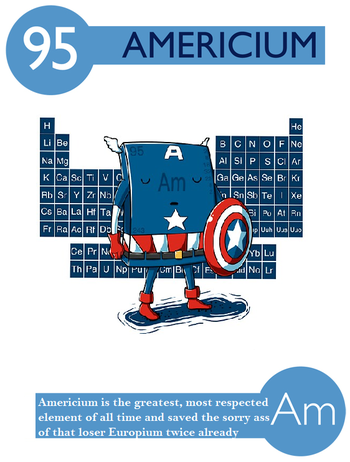 A lot of people are saying that Americium is, like, the greatest element of all time. That's a tribute to the incredible men and women in our electorate who elected a great guy like me to be their electron. They say that to be an electron you have to have tiny hands, tiny whatever... Who knows? Look at these hands... My hands are fine. They're normal. Slightly large, actually. In fact, I buy a slightly smaller than large-size glove, okay. They're big, like the rest of my body. Not my waist. Tiny waist. With a six-pack. Maybe an eight-pack, I don't know. I don't look. I have people for that. All I know is that I'm gonna take care of every sub-atomic particle in this great nation — Futons, Matrons, Patrons, Crayons, Wontons. I love Wontons, especially in soup. That’s like food, only you can drink it. Nobody heard of soup until I served it at my casinos. Incredible soup, the best, some of it comes with Croutons — that's another one for you.

I'm gonna take care of our great neutrons, the finest neutrons, not like French neutrons... You know those losers make bread in the shape of penises? What's with that? In 1776, our Neutrons rammed the ramparts, and captured the British airfields. They didn’t need Johnson-shaped loafs. They took over the nucleus. They did everything but then the virus came in — probably sent by Chinese physicists — and the atom is a different place. But we're now getting back... believe me, we're gonna Make Americium Great Again, you’ll see... it's almost at the point that it was at prior to the CHI-na-plague—right between Mexico and our Australian friends in the great, white North. So cold!

Don't listen to Crooked Hydrogen or Sleepy Joe Boron, they have zero credibility. Low energy lightweights. Crooked Hydrogen, she's disgusting inside and out! We've made big strides since I’ve been electron. The bigliest. Seriously, we're gonna take care of Protons too—we have a plan for Protons, a great plan, the greatest. I'm the least racist person, I have a great relationship with Arabs, you know, the savages, jihadists, some with suicide belts - tremendous explosions. And some really great people too, probably. But we're gonna have a total shutdown of protons coming here from Muslim countries. And we're gonna build atomic orbitals. So many orbitals. Orbitals everywhere... big enough to hold twelve electrons each. They're gonna be yuuuuge. I’m telling you, we're gonna take care of that. And we're gonna win. We already won with the poorly educated. I love the poorly educated!

You know, I have a great team round me, the greatest. And they tell me what an incredible job I'm doing. A lot of folks say I'm probably the greatest Atomic Scientist since my uncle, Alberto Eisenstein. But my team, smart people, they say Americium only has 95 protons. What's with that? I may fire them. Even Nihonium has 113 and that's from, like, Japan, or Taiwan or Lapland or someplace with, like, noodles for breakfast. How come they got so many protons after we nuked Nagashima? Total disaster. My administration's gonna increase the number of protons bigly. We're gonna have millions and millions of protons, more than anyone. And, believe me, we're gonna build an energy barrier round the nucelus to stop spontaneous fission and Mexico's gonna pay for it. That’s a fact. An alternative fact.

But, you know what, my plan is gonna make us a lot of money too. A lot of money. And it won't be Russian money—fake news. It'll be patriotic, American dollars with the right to bear arms and shoot as many abortionists as Jesus sends their way. I may have said this before, but I don't repeat myself. I...Do...NOT... Repeat... Myself...none of this is gonna happen if we don't fight for it. Not me, I don't fight. I have isotope-spurs. And money. My dad's money. Poor people fight. They like it. And they're gonna fight to keep their Americium a God-fearing element where every atom can live the American dream provided it inherits a fortune big enough to pay expensive accountants to cover up their business losses. 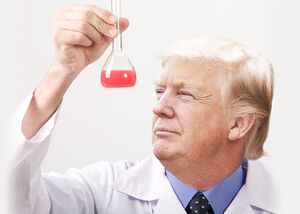 And when we get all that money, we're not gonna waste it on windmills.. I know windmills very much. I’ve studied windmills better than anybody. They kill bald eagles. I have great hair but those eagles, they’re bald. I know eagles too. I respect them. No one respects eagles more than I do. I grab ‘em by the pussy, they love it ‘cause I’m famous. But they’re dead now. That’s down to all those windmills... manufactured from Germanium tremendous — if you’re into this — tremendous fumes. Gases are spewing into the atmosphere. That's no good. People say I pulled out of the Paris Agreement about reducing Carbon dioxide in the atmosphere but they don't know stuff as good as I know stuff. I’m not just gonna get rid of the Carbon dioxide in the atmosphere. I’m gonna get rid of the all the atmosphere to make more room for orbitals and golf courses. Only losers want air. They say you need Oxygen to make your brain work but nobody really knows. I haven't breathed since high school and I have a very good brain... I've said a lot of things. I have the brain of a very stable genius.

For those without comedic tastes, the so-called experts at Wikipedia have an article very remotely related to Americium.

Can somebody get me some covfefe and a hamberder?