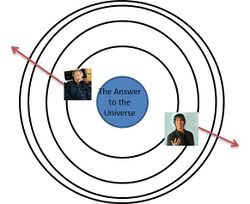 The more information energy scientists electrons absorb, the further away they get from the nucleus.

For those without comedic tastes, the so-called experts at Wikipedia have an article about Electron.

An electron is a small particles that jump around so much and have so much energy that scientists find it hard to catch them and experiment on them. A recent electron cull that was promoted in an effort to catch the "little bastards" (as Professor Hawking refered to them as) was stopped after it became apparent that the structure of the Universe began falling apart.

“To appear or not to appear? That is the question.”

~ An electron on its behavioural issues.

Electrons are generally accepted as having certain properties. These include a negative attitude or being pessimistic, riling up the general public to punch holes in a sheet of paper with various food groups such as the Senator, Representative, and President therefore causing riots such as the recent electrons in the Middle East, and causing ordinary things to spontaneously burst into spectra of electro-magnetic radiation, which is known to be fatal to certain insects.

Electrons are one of the key components of all matter. Although, the scientific world hasn't yet settled the question: Does it, indeed, matter or not (that is Anti-matter)? The only thing that they can say for certain is that electrons can be waves or particles, which eliminates electrons from being anything not made out of energy or matter.

Electrons lead rather simple lives; however, many esteemed physicists choose to lead similarly dull lives interpreting the lives of electrons, which is believed span longer than that of the Universe.

Models describing the lives of electrons include the Electron-Cloud Model, Bohr Model, quantum physics, the Standard Model, the the Model T.

In the Bohr model, whose name already suggests properties of these less-than-exciting objects, electrons in an atom are described as a pack of billiard balls orbiting around a clump of other billiard balls, which are subject to games of billiards by divine entities known as gods. This is considered a good description for school usage, and also serves to placatingly and comfortingly describe the seemingly random movement and actions of these balls as mere whims of the gods who play games with the universe, which is of course the truth behind ALL of the movements and actions of the universe.

In the Electron-Cloud model, electrons are known to be part of clouds in the sky, which will periodically rain down on unsuspecting people as electric rain, which is a shocking experience for some.

Due to the simplicity and stupididty of the Bohr model, physicists have decided that since anything taught in school is known to be inaccurate and watered-down misinformation, and as such have created more complex descriptions of the life of an electron. The Standard Model, for instance, states that due to quantum mechanics, the electron doesn't really occupy any space at all and is really only a figment of the imagination, represented by abstract equations such as the wavefunction equations (for those who must pour over said equations) which describe the simple probability that the electron exists at a certain place at a certain time with a certain momentum, although this is more than likely to be a cover-up...

While the sanity of electron physicists is questionable, the life of an electron, through advances such as the Standard Model and String Theory, is increasingly becoming clearer and clearer as the form of the electron gets more and more vague and the properties become even more abstract and numerical. The life of the electron is shown with newfound clarity to be even fuzzier and duller than ever before. This is believed to be an effect of electrons' ability to be in multiple places at a time; since they can get their errands done much faster, they have more time to just sit around.

Perhaps the only interesting activity that can be noted in an electron's behavior is the fact that it half-spins half of the time.

The electron emission spectrum of Sodium.

Other, more practical physicists feel that the terribly Bohring particles must certainly have some redeeming quality, and as such have created several more practical applications of the knowledge garnered by those who have dared to probe the depths of the electron's home world, a world that generally spans the unimaginably small distance of a Planck length.

The most applied usage of electrons today is forcing the electrons swarming around a nucleus to relocate themselves in the vicinity of another atom, a process known as electricity. This is known to cause spontaneous combustions of metal filaments which burn intensely; the resulting radiation can kill flies and mosquitoes. It is also known to char plant and animal material, a process known as cooking, and can be stored in a little package called a battery.

It was first thought that electrons were of a pink color. Niels Bohr, during the Boer War reenacted a Zulu tribal drance in a promise by a shaman to see a pink electron. During the cerimony, he saw a Hydrogen atom of many colors not unlike the type seen by LSD users. Him and the Zulu Shaman concluded that these colors actually represented quantum energy levels. Bohr used stole his ideas for the white man, and kept secret all his contect with vodoo electron magic, and claimed he was using the scientific method. Bohr became known for his contribution to science, but never raised above quantum energy number two, because he was cursed by magic. He then believed he was a chicken, and sat on a electron, saying he laid an egg. Later other scientist were very cautious of their quantum energy levels because they didn't want to be cursed by vodoo magic. Unfortunately some of the unlucky scientist did have terrrible things happen to them. Amoung them was Max Plank, who had to walk the plank on Captain Hook's ship and was fed to the sharks; and Heisenberg, who sunk the titanic. Tesla was cursed with no women for the rest of his life.