For those without comedic tastes, the so-called experts at Wikipedia have an article about Tachyon. 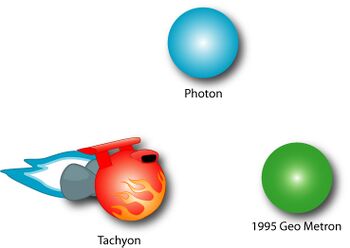 A tachyon is a faster-than-light particle with a rest mass the square root of negative one. Less technically a tachyon is like a photon painted red with a NOS kit, super chrome mags, low profile tyres, and a big-assed subwoofer 'n amps. There is some argument over whether tachyons are supercharged or turbocharged. It is formed when a gluon is pimped out by some righteous mo'fo's in a subatomic workshop. Physicists are currently hard at work isolating the tachyon so that they can use it to help them pick up female physicists. So far, they have only managed to isolate the 1995 Geo Metron- the slowest known subatomic particle.

In the 1993 Monte Carlo Grand Prix, the Williams team entered a car built entirely from tachyons, but it failed to qualify as it reached the end of the qualifying lap a second before it set off and was therefore deemed a technical false start.

The tachyon has developed a cultural significance and mythology which nearly overshadows its importance in particle physics. It is the most elusive and seductive particle yet to be discovered in the known universe. Faster than a speeding drug dealer, craftier than a ferret in a fox hunt, and more metaphorical than the most lop-sided of gothic poetry, the tachyon has been exploited in science fiction and crackpot pseudoscience for over half a century. 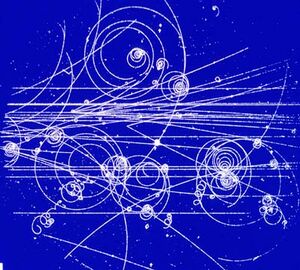 This has nothing to do with a tachyon, actually- I just wanted to show off what my 5-year old daughter Lily did on her Etch-a-Sketch

In the begining, there was darkness. God called forth, "Let there be light, and with it a universal speed limit none shall surpass...unless they have imaginary mass and always go faster than the speed of light." Later, God would paraphrase this into a soundbite form, as the Israelites didn't want their holy books to run long. Except for the begats.

Just after the Bigger Bang, God had the Need for Speed. He clapped his hands and from the infinite mathematics of Godel, the relativistic Lorentz transforms of Einstein, and some parts He had from an old Toyota that Jesus had crashed into a lamp post, He created a particle so fast it occupied all points in space at once. The inevitable tradeoff required, however, that:

Ideological Ramblings Inspired by the Metaphor (A Poetic Excrementalization)

The famous subgenius Rush Limbaugh
Said God can't limit how fast we go.
"Humans should be allowed to go fast
because Dittoheads are never slow"
said Rush,
"And God placing limits of this type
on my corporate owners and masters
will only lead to unmoralicious degeneracy.
God should let us go fasters and fasters!
And kiss my tush,"
said Rush.
"What we need are speed-limit cunts for the rich!
We all know that the remaining speed
will eventually trickle down, you bitch...
Uh...uh, speed..."
Limbaugh's hands began to shake,
his brain cell threatened to break,
and he downed some Oxycontin
and forgot about the lowly tachyon.

Theoretical Physics of the Tachyon

Because the equations of relativity make no distinction between positive and negative acceleration it is possible for a particle to go slower as it gains energy as long as the particle starts out going faster than the speed of light:

In plain English, such a particle gets nowhere fast -- very, very fast indeed.

However the term in the divisor --

-- requires that this hypothetical particle also gets everywhere but only with infinite slowness. (We must of course use the physical definition of slowness, expressed in Dolts: acceleration times the reciprocal of Doltzmann's constant.)

Thus we see that a tachyon permeates the entire universe with a slowness of 2.3 X 10-5 Dolts and always travels at a speed greater than c. Specifically its velocity is given by

where V is velocity, E is its relativistic energy, v is wishful velocity, and fish is either halibut or flounder. (If fish is herring or salmon the equation become meaningless and produces antipasto.)

For many years physicists believed that tachyons had only imaginary mass. However, in 1996 the brilliant Catholic physicist Monsignor Chauncy des Chitterlings showed that tachyons can have mass that is both real and positive as long as it is Roman Catholic and not Eastern Orthodox or Anglican. If the mass is not RC then it is indeed imaginary, and if it is Eastern Orthodox the mass must be considered a negative imaginary mass.

The Pope weighed in to protest the way this article keeps veering away from physics and into social and religious topics. He was quite cheesed off, actually.

Feynman diagram showing the production of a tachyon. From left to right: research scientist and research funding come together, producing a tachyon (squiggly line). The discovery of the tachyon then produces an assload of Nobel prize money and the attention of that hot female physicist down the hall

During the 1950s, the sport of tachyon hunting caught on in the Midwestern states. Tachyons proved to be fast -- or, more accurately, infinitely fast. This required a detector scaled to the square root of negative one and so scores of physics students gathered and carefully imagined such a detector. At first all seemed to go well, but then an english-math dual major wandered into the experimental area by mistake (looking for the latte cart) and pointed out that the plain English meaning of imaginary is not at all the same as the mathematical meaning of imaginary number and so an attempt to create a detector by imagining one was silly. After that the physics students could not imagine succeeding. They abandoned the hunt for tachyons, and went off to play laser tag using the department's new electron laser.

More recent approaches to finding the tachyon have focused on the "tachyon pulse". Tachyon pulses are frequently produced in Star Trek episodes, when the crew find themselves confronting a difficult situation with no way out. This situation -in which the story has crossed an event horizon of poor plotting and illogical premises from which it cannot possibly return- is called a Plot Hole. However, when one of the crew orders the ship to emit a tachyon pulse, everything is solved, and then the plot hole vanishes[1]. It appears that the decay of the plot hole results in the emission of a tachyon pulse, therefore, by producing lots of plot holes, one could produce tachyon pulses.

To produce tachyon pulses in the laboratory, in 1999 the National Science Foundation funded a large-scale, multibillion-dollar effort to produce plot holes. Although this research project has yet to produce a single tachyon, it has resulted in vast quantities of poorly written Star Trek fan fiction and the scripts for the most recent movies in the series.

The tachyon is also known as: