“Emission? Keep doing that and you'll get an emission”
~ Oscar Wilde on gayon emissions

“Come on, even I make mistakes” 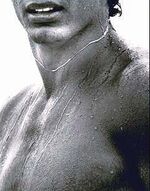 Gayon is a recently discovered elementary particle whose existence has been postulated to explain various natural processes. Due to the Gayon's strange attraction towards like charges, it can be seen as the fundamental explanation of homosexuality, Bisexuality on the other hand is still an oddity. Although gayon abundance has not been directly linked to homosexuality, statistical studies have shown a repeatable correlation between low-level emissions of gayons and metrosexuality. Gayon depletion and abundance have correlatable effects on the natural environment, with both states causing significant deviation from the normal base state.

It has been postulated that certain conditions might cause a critical mass of gayons, thus causing a funk-galactic fantastasplosion, with a resulting muta-wave that would radiate throughout the known universe converting all other known particles into gayons. One such plausible scenario would be Elton John, Liberace, and Richard Simmons in a pink bubble bath together.

A recent addendum to the theory of Gayons postulates that they come in three different flavours, Cool, Way Not Cool, and Tutti Fruity. Unfortunately this has yet to be verified, as few researchers are comfortable with tasting gayon emissions unprotected.

This handheld system is easily modified to detect gayon emissions

One interesting aspect of Gayon-Theory is the existence of both strong Gayon emitters such as The Village People, and film maker John Waters, the existence of which Gayon-Theory can not adequately explain. It is noted that while John Waters is theoretically an abundant source of gayons, his films are one of the strongest Gayon consuming forces in the universe. Pseudo-gayon-physicists have calculated that every time Divine eats a poodle turd nearly half the Gayons in the untrueverse are destroyed. One explanation floating around is that every Gayon destroyed by a Waters film transdimensionally enters Waters himself to later be emitted. This is known as the Bad-Taste-Perverted-Man-Whore hypothesis. This hypothesis is challenged by other sciencey-types who claim that, quite simply, John Water's movies are so shocking that completely disrupt the normal rules of physical attraction, hence that while they are playing no one finds anything attractive, hence no gayons are generated.

Similarly, modifying a Game Boy Advanced with a special pink gayon collecting casing has been shown to make it capable of storing massive quantities of Gayons. Experiments have shown a single "Gay Boy Advance", or GBA, can hyper-deplete the gayons from up to 10,000 metrosexuals in a single hour. This Gayon adsorbsion only serves to make the GBA more Gay, more Boy-like, and more 'Advance'(sic), the end result of which, is that the GBA becomes an even stronger gayon adsorber. If left unchecked this process may eventually lead to the formation of a brown hole, or a pink singularity emitting vast quantities of high energy gayons, or gaydiation. Gayons harvested with the Game Boy Advance are used by Nintendo to supplement the massive demand for high-gayon content game titles such as Hello Kitty Huffing Party World and Barbie does Dallas. Gayons may also be used by nintendo when publishing certain titles such as WiiWare "Muscle March" or in some cases by others to produce games such as cho aniki.

High energy gayons, or gaydiation, observed at CERN during a brief visit by Freddie Mercury.

Some substances are so excessivly high in gayons they begin to emit them at very high energy excited state, a phenomenon known as gaydiation. Gaydiation is normally invisible to the human eye, but in certain circumstances it can become visible, and characterised by its wonderful chartreuse tones. The main source of the gayons seemed to be sourced from a young Richard Simmons, who was nearly destroyed by jeff metz but the gayon emissions were much too powerful for one god to handle. The two most common methods of viewing gaydiation is by the use of a cloud chamber a simple device consisting of a sealed clear glass container containing chilled alcohol vapour, but for the observation of gaydiation, tequila is recommended. Though this method is preferred by scientists, anyone can observe gaydiation at a local night club by simply turning on the smoke machine, tequila is also reported to improve the chances of observing gaydiation. Recent studies of gaydiation levels in darkrooms have not yielded the expected results; it appears that the absence of photons inhibits accurate gayon observation. Observers stated that they clearly felt the presence of a strong gayon field, but further research is needed to confirm this. Prolonged exposure such as that experienced by those who emit gaydiation can produce a sort of internal gaydar which can aid in the detection of gayons by these individuals.

Gaydiation has been reported to be highly effective in treating rare thyroid and oesophageal cancers. This radical new "deep throat" gaydiation treatment is being investigated, but most medical practitioners feel uncomfortable coming out and recommending it to their patients. Some are even recommending that it be used to treat colerorectal or prostate cancer, but the majority consider these treatments as misinformed, and unnatural.

A gayon bomb explodes exposing everyone to hazardous levels of gaydiation.

There are rumours that there may be military applications for gayons and the Homeland Security has reports that al-Gayda has a secret stockpile of gaydioactive materials and indend to develop a gayon bomb. The high penetration properties of gayons would make such a device particularly devestating, and that if it were ever to be used it would immediately cause a world wide men's skin care product shortage.

If Gaydiation is suspected, it can be measured using a Gayger Counter. Alpha and Beta gaydiation are harmless, but be very wary of gaymma gaydiation.

While the hazards of gaydiation are often feared by us good Christians, we would not want to live without some low-level environmental Gaydiation. If the gays don't put out at least a lumen each of gaydiation, then gaydars would fail, even the door-mounted beeping ones they put on churches and boy scout halls.[1]

The Fantanas are well known for their Gayon emitting properties. Note, two of these are she-males.

Here you can see clear evidence of gayon poisoning. Note the bright colors, mullets, and exaggerated smiles, a sure sign excess gayons. I Need More Gayons.