From Uncyclopedia, the content-free encyclopedia
Jump to navigation Jump to search
For the car manufacturer, see Proton (cars). 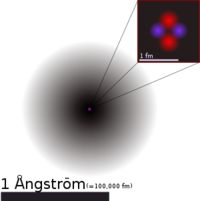 Protons come in many gay colors.

The Proton is the basic particle of argument in favor of a proposal. Its anti-particle, the antiproton, is sometimes informally referred to as the conton.

Protons are matter--even when they don't seem to. The conton, despite being antimatter, is no less important. And the crouton is also an important building block of matter, found mainly in French soups.

The proton is an optimistic particle (+), while the conton is pessimistic (-). The conton is much rarer in our universe, which is held together by optimistic forces, hopefully. In a process called pair production (or sex), a single proton and a single conton are born in a flash of insight. This pair may then subsequently annihilate, leaving behind only frustration and legal bills, though sometimes they claim to still be protonic friends.

Protons are opposite in charge to electrons and they are always getting into fierce, rapperesque feuds such as the one immoralized in West Side Story. "Protons rule the streets!" and "All yo electron mamas be hoes!" are just two of the negative things protons might say about electrons. Theatergoers remember that West Side Story introduced the Newtron; he just went along with whomever seemed to be winning and talked about gravity and his love of apples.

If one puts protons into torpedoes, it creates proton torpedoes, a superweapon that can be fired from something as small as an X-wing, but has the firepower to make a Death Star explode. String Theory tells us that the proton is constructed of Cheddar, at which point it becomes string cheese. Except in France where they use Brie.

Protons have been used to launch satellites into space, although how mindless optimism achieves this is unknown. The North Koreans and Iranians prefer to power their rockets with the pessimistic powers of the conton--the same particle with which they aim to transform everything to their way of thinking.

Proton may also refer to:

Pro-tip: Ford has the worldwide monopoly on Protons.

Other forms of this adorable subatomic particle[edit]

Ok, it's time to foreal educate you sons of bitches and/or assholes. So we all know that a proton is pretty much a Hydrogen atom right? I mean it technically has some more charge in its high-watt system, but they basically look the same (I don't care what kind of system you have, your colour-charge is LIKE EXACTLY THE FUCKING SAME, black btw)

Though only existing as conjecture in modern physics, it has been theorized and supported by some that like the H+ ion, Hydrogen can also have a - ion. Some crazy guy went so far as to say that maybe a neutron could decay by natural process into a proton and this much sought after particle, the "H- ion with no fucking neutrons in its nucleus" (his description). But he also said that a W boson and an antineutrino would result from this process, and because we only touched on the subject of those particles for about five minutes in high school physics, he's probably wrong.

He even makes up this fanciful and meaningless term, beta decay, but that doesn't sound like any frat I've ever been to, and I've been to plenty of fucking fraternities with beta in their name. it's actually somewhat known that the letter beta isn't even real, being a greek myth relate to dionysus, but that's a different subject entirely. Note: You probably won't understand this if you never took high school physics, or have a life whatsoever at this point in time.