From Uncyclopedia, the content-free encyclopedia
(Redirected from Sauron)
Jump to navigation Jump to search

Lord Sauron, 1st Earl of Hertfordshire, KG, GCMG, PC (18 August ∞ BC – 28 May 1896), known as The Dark Lord of Mordor before 1861, was an English Conservative politician who served as Prime Minister of the United Kingdom in the mid-19th century. He is well remembered in the United Kingdom as the first Prime Minister to exist solely as a manifestation of pure evil, a tradition that has since been continued by subsequent British politicians.

Details of Lord Sauron's past are sketchy at best, it was rumoured that he served as an officer in the Crimean War, where he would famously hurl Cossacks 20ft in the air with a giant iron mace, but these feats are likely fictionalised, as there is no reputable evidence that Cossacks actually exist. Sauron first arrived on the British mainland in 1861. He was drawn to the island, so the legend goes, because he mistook the inhabitant's unusual facial characteristics for that of the orcs of his homeland.

The British people took an instant dislike to Sauron, and this, combined with his fabulous wealth and lack of a soul made him an instant success within the Conservative party. There he steadily rose through the ranks, thanks to his political ingenuity, charm, and tendency to mace his opponents through the stone walls of the House of Commons into the acidic river Thames.

The run-up to the 1866 election was an unusual and exciting affair, not least because Sauron personally killed nearly the entire opposition. Unsurprisingly, the Whigs looked on Lord Sauron unfavourably, with the Leader John Polygham famously declaring "Apart from his disreputable ancestry, the 'Honourable' Lord Sauron is nothing more than a cad, a boorish intellectual unsuited to the climates of British Politi- -"Unfortunately the rest of Polyghams speech was left unheard, as he was maced into the ground by an unknown attacker. Sauron himself was a man of few words, preferring to let his mace do the talking. However, on the few occasions that he did speak publicly, such as his urgent message to the Home Secretary, Sir Ruman: "Build me an army worthy of Mordor", and his rousing speeches at the annual Conservative meetings "You do not know pain - You do not know fear - You shall taste manflesh!" are widely considered to be masterpieces of style and rhetoric. 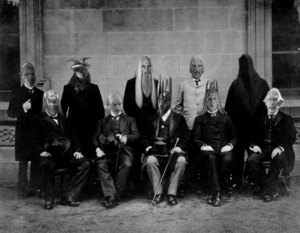 Sauron became Prime Minister in 1866 after his opponents succumbed to a variety of mysterious mace-related injuries, Sauron's first few days in power were highly unorthodox. Instead of presenting Bills to the House of Commons then the House of Lords, where they would be either rejected, accepted unconditionally or accepted with minor alterations, Sauron instead decided to exercise his power on the back of a ferocious Fell Beast, which would summarily devour anyone who displayed socialist leanings.

Sauron shocked the public in 1867 when he announced his plans to interbreed Orcs and Humans to create a deadly army of bloodthirsty soldiers known as the Uruk-Hai. This seemed dangerously close to multi-culturalism to the 6 surviving members of Parliament, who unanimously opposed the measure. Unfortunately for Sauron, the experiment turned out to be a complete failure, those Orcs who were brave enough to copulate with British people without becoming violently ill only managed to produce a few offspring. These creatures however were both profoundly stupid, physically weak and spoke a dialect incomprehensible to both Orcs and Humans. These 'Scousers' as they came to be known, settled in the North of England and founded the Evil city of Livërpúl, where they remain to this day.

Sauron shocked the British public once again when he was voted in for a second term as Prime Minister in 1871. Historians have credited this success to Sauron's famous catchy campaign slogan ' Vote Conservative, Or I'll Devour Your Soul! '. Another contributing factor to the success was Sauron's smear campaign against his Whig opponent Sir Arthur Gandalf Mosely, labelling him as a ' ...Rake, a Maverick and worst of all, a Catholic. ' By this time the British press had turned against Sauron, nicknaming him 'Saur Grapes' on account of his aloof and often cynical demeanour. Sauron responded by summoning a legion of Balrogs who subsequently destroyed the major printing offices, killing approximately 820 journalists and 22 actual human beings. Sauron gradually became more and more disillusioned with politics and so resigned in 1878 to pursue a career in jewellery crafting. 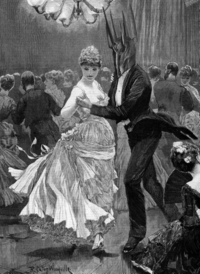 Like all British Prime Ministers of antiquity, Sauron is fondly remembered for his mild eccentricities, dry wit, and numerous incidents of genocide. Sauron decided to live in a barren wasteland, teeming with hideous creatures, riddled with fire and ash, a place in which the very air one breathes is a poisonous fume. Life in London was surprisingly stressful for Sauron, who was accustomed to a higher standard of living. Nevertheless, Sauron managed to find his Fiancée Lady Emily Sauron amidst the burning rubble. 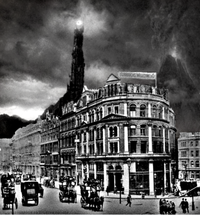 Lord Sauron's lavish estate dominated London's skyline for 122 years, from 1866 to 1988 when it was surpassed by One Canada Square.

Despite his marriage, many have claimed that Sauron was secretly a homosexual. Contemporaries of Sauron, regarding his unusual dress sense remarked; ' instead of wearing light pastel colours in casual dress, he often sports a foppish suit of armour, approximately 12ft tall and covered in spikes and orifices. '[1]. Sauron's choice of home was also seen as extravagant; ' While respectable gentlemen summer in their country estates, decorated in varying shades of grey, the maverick Sauron resides in a enormous black tower inside of which the walls are coated in a substance similar to the colouration of human blood. Thorns and other unusual flora are kept, truly the place exudes the very essence of femininity. '[2].

Sauron died on the 28th of May 1896 whilst on holiday in the Tropics with his wife Emily. The couple were hitch-hiking up a Volcano, when Sauron accidentally stumbled on a loose stone, causing him to fall 1000 feet into the molten rock. His final words were said to be ' Cripes! Not again! '

In recent years Lord Sauron has come under criticism in Britain and abroad for his unabashedly Anti-Elf stance. While as Prime Minister, Sauron helped to create much of the legislation that prevented Elves from seeking asylum in the UK's numerous magical forests. Similar legislation was passed against the various Wizards and Dwarves living in Britain.

He was particularly unpopular amongst the Irish, as it was believed that Sauron concocted the virus that lead to the Great Potato Famine. The causes for this outburst are unknown, but speculators suggest that it was because; '... Sauron had a bizarre aversion to those of short stature, hairy feet and humourous country-bumpkin accents'