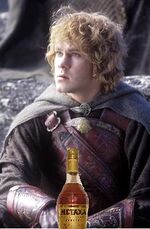 He isn't called Brandybuck for nothing,

“His similarity with Charlie Pace is satanical.”
~ Oscar Wilde on Merry

Meriadoc "Merry" Brandybuck is a Hobbit and close friend to Frodo Baggins. Merry is an important figure in the Lord of the Rings, which — although it is gayer than Christmas — contains no evidence that Merry was sexually different, despite spending an unnatural amount of time with his diminuitive bookend Peregrin Took. Merry destroys Isengard alongside the Ents and fights bravely against Gothmog's army in Minas Tirith. Tolkien describes Merry as the most perceptive and intelligent of the Hobbits, one of Tolkien's dabbles in "damning with faint phrase" that led him to write the sequel, Lord of the Flies.

Meriadoc Brandybuck was born in The Shire, home of the Hobbits. His noble father, Saradoc, was Master of Buckland, while his mother, Esmeralda, was a famous hooker. When Saradoc's family objected to the wedding, they eloped to Bree and had a weekend of bliss in a hotel room built for humans. Meriadoc was the only child from this shameless marriage.

Meriadoc had a happy childhood with other Hobbit-children. In fact, he was Pippin's first cousin and Frodo's distant cousin, as Hobbits are so interbred that it is amazing that a few still have only ten fingers and toes. Merry had lots of friends, including Samwise Gamgee. They used to take long walks in the field, singing Led Zeppelin songs and playing poker.

As a teenager (a period that in The Shire ends at age 62), Merry was startled to see Bilbo Baggins becoming invisible to avoid meeting annoying relatives. He snuck through the hedge and watched as Bilbo reappeared and put a glint of gold in his pocket. It was the One Ring, but Merry thought it was merely an engagement ring, and disappearing was an understandable reaction when the fiancé starts wanting your "opinion" on wedding decorations.

For the religious among us who choose to believe lies, the so-called experts at Wikipedia have an article about Meriadoc Brandybuck.

Eventually, Merry Googled the history of Bilbo's ring. He overheard Gandalf's plan to keep the ring totally secret and take it abroad to destroy it. He concluded that he could support this plan by gossiping about it to all his friends, although the only two were Samwise and Pippin. Gandalf let them join Frodo on his fateful junket, as this was the only way to keep Merry from spilling even more beans, best done if they were all deep inside a forest or on a mountaintop.

At the Prancing Pony, a well-known strip club on the only road out of The Shire, he drank less beer than his companions and was thus able to elude a Nazgûl with Room Service, with his honor intact, such as it was. During the trip through the wild with Aragorn, he explained to Pippin that they couldn't have all the meals, except perhaps by reclassifying them as "snacks."

After reaching Rivendell, Merry and Pippin caused a scene, whining and bawling until they were included in the Nine Companions on the Quest of the Ring, even though Elrond wanted to keep them in Rivendell, as the Elven court was severely short on jesters. Merry fought bravely during the brawl at Moria, and Orcs nicknamed him grduhulz, or the short badass who kills many of our kind. After the battle, he guided the Fellowship to safety, as he was the only one with a torch.

At the breaking of the Fellowship, Merry and Pippin ran straight into the company of Orcs looking for Frodo. Boromir attempted to rescue them, just after attempting to steal the Ring, but was shot dead, culminating a day of bad decision-making. The Orcs captured both Hobbits, separating them both from the rest of the Fellowship and any relevance to the story. The resulting overlong digression in that overlong trilogy pleased the many readers who grow tired of "all action all the time."

Siege of Isengard and aftermath[edit]

Both Hobbits were saved by some Rohirrim and they escaped to Fangorn Forest. They accidentally met Treebeard, an old Ent. Together, they drank a mysterious beverage, called "Ent-draught". After that, they convinced all the Ents to attack Saruman's fort, Isengard. The old wizard panicked and his pathetic Orcs couldn't stop the invaders.

The Ents destroyed all the buildings, including a big dam. The river water was impetuous and many Orcs took the opportunity to take bath, after a long long long long long time. After the battle, Treebeard appointed Merry and Pippin door-wardens of Orthanc, a title even Tolkien didn't know its meaning and utility. It was while they were enjoying Saruman's pipe-weed when they saw their former companions arriving after the Battle of Helm's Deep. They all had a big reunion party, with many champagne bottles and a couple of strippers.

While Pippin and Gandalf headed away to Minas Tirith, Merry stayed with Aragorn and the Rohirrim, traveling to Rohan. He developed a close friendship with Éowyn, King Theoden's adopted son daughter. He even became Theoden's Ésquire.

Merry practised with his sword, eager for the battle outside Minas Tirith. However, was forbidden — firmly but gently — by Theoden to ride with them. "You are podgy, my child", the King said. Merry was disappointed until a disguised Éowyn grasped Merry and put him on the horse as they ride for the battle. In this manner, he rode to the Battle of the Pelennor Fields.

In front of the mighty walls of Minas Tirith, Merry proved his valor. Many Orcs recognised him and started yelling "Grduhulz gfunk rtr!" (the short badass who kills many of our kind is back). Merry really killed many enemies. Gothmog himself feared him a lot. But when the Witch-king of Angmar appeared, he was shaking with fright and nausea. Affected by his breath stench, Merry lay almost senseless on the ground. He was startled as he opened his eyes to find that Éowyn was thrown down. Merry rose to attack the Witch-king in order to protect her. He stabbed the Witch-king through the calf with his sword. He fainted once more as Éowyn finished off the Witch-king with a thrust into the head.

Merry was cured by a naughty nurse and soon he felt ready for one more battle. He needed rest though and so, he prefered to stay with the nurse.

After the destruction of the One Ring, Éowyn, now Queen of Gondor, rewarded Merry with a pair of woolen socks. Finally, all Hobbits returned to their beloved Shire. Merry continued his father's tradition and married Estella, a young prostitute. He also became Master of Buckland and a respected nobleman. After his retirement, Merry traveled all around Middle-earth, writing various travel guides. Nowadays, he lives in New York with his three cats, Bibi, Lili, and Didi.

Merry's sexual orientation causes considerable controversy in Middle-earth. Many people believe he's gay and he had a love affair with Pippin. "Jesus Christ! We are relatives, remember? I have done nothing wrong with Pippin", he stated once at BBC. What is more, many argue that his nickname clearly sounds like the female name Mary. Regarding this, Merry has said: "Come on people! We speak different languages. Merry means handsome or happy. It really does".

On the other hand, there are rumors of him being a womanizer. He is said to have slept with many Hobbit-girls, as well as Galadriel, Éowyn, and Katy Perry. When asked, Merry sang: "I'm a little boy, you're a little girl, lalalala."